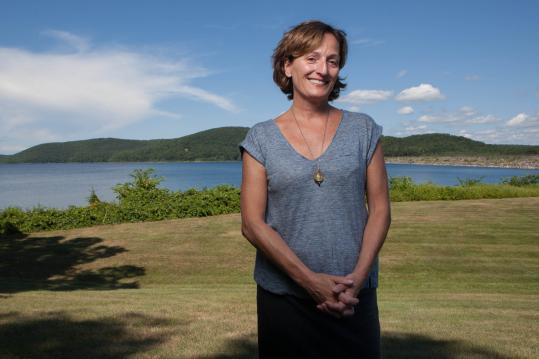 Maryanne O’Hara at the Quabbin Reservoir in Belchertown. Archival photographs show Enfield, Mass., in the years before it was flooded to accommodate construction of the Quabbin Reservoir in Central Massachusetts. Enfield was disincorporated on April 28, 1938. Above: visitors view the Quabbin. (MATTHEW CAVANAUGH FOR THE BOSTON GLOBE (FAR LEFT); ARCHIVAL PHOTOS)
By Joseph P. Kahn Globe Staff / August 7, 2012
Text size – +

WARE — Maryanne O’Hara no longer visits the Quabbin Reservoir as often as she once did, growing up in the Sturbridge area in the 1960s and ’70s. But when she does come to stare across the water at the wooded hillside where the town of Enfield once stood, her gaze takes in the past as well as the present, the loss of what was — a community sacrificed in the 1930s to progress and politics, when state authorities situated the reservoir here — as well as the natural beauty of what’s replaced it.

“Old-timers I’ve talked to who were around then still remember how devastating it was,” says O’Hara, 54, standing at the Enfield Lookout on a sunny afternoon. O’Hara adds that living in an old house in Ashland that was also once threatened by reservoir flooding has given her an even greater understanding of the lives displaced here.

“When you’re writing something, your antennae are always up,” she says, standing beside a photo display showing Enfield before and during its destruction.

Besides Enfield, three other Central Massachusetts towns — Greenwich, Dana, and Prescott — were disincorporated and destroyed to make way for the 39-square-mile Quabbin, which lies 65 miles west of Boston and was finished in 1939. At the time, it was among the largest public works projects of its kind (what Boston’s Big Dig would become decades later).

Twenty-five hundred residents were displaced by the reservoir’s creation. Town cemeteries, churches, memorials, and other public buildings were relocated. Stately homes were leveled, parks and fields plowed under. On April 27, 1937, in one final burst of festivity, 3,000 Enfield citizens turned out for a farewell ball in the Town Hall, not long before the bulldozers arrived in force. What remains today, resting under as much as 150 feet of water, are mostly empty foundations and ghostly roadways.

Next week, O’Hara’s debut novel, “Cascade,” is being published by Viking/Penguin. A decade in the writing, it draws liberally from what happened to Enfield and represents a major creative step forward for O’Hara, a former Ploughshares fiction editor whose short stories have appeared in numerous magazines and anthologies.

Cascade, Mass., the fictional town in which the novel is largely set, resembles Enfield in many ways: small, provincial, thriving if not exactly prosperous, threatened with extinction by forces beyond its control. Yet there are important differences between the two, notes O’Hara.

Unlike Enfield, whose history she delved into deeply while working on the novel, Cascade supports a vibrant arts community. Its Shakespearean theater company is regionally famous. World-renowned actors have performed in what was, in the 1920s, a bustling summer tourist destination. Enfield was primarily a farming town, never a summer playground like Lenox, for example.

The prospect of the theater being torn down to make room for a man-made lake is central to O’Hara’s story. If art is not lastingly valuable, it begs readers to consider, what is? Family? Property? Community?

The book’s central character is Desdemona Hart Spaulding, daughter of the theater’s owner. A talented painter who has studied in Paris, Dez, as she is known, dreams of making it in the New York art world. Above all, she yearns to create work that has meaning and permanence in a world where both seem in short supply.

“I liked this idea that you’re in a place that might be destroyed, and at the same time, you’re trying to create art that you have no idea what will happen to, once you die,” says O’Hara, perched on a bench by the reservoir’s banks. “Everything is just an act of faith.”

As the story opens, Dez’s father is dying and fretting over his theater’s survival. Meanwhile, Cascade nervously awaits a decision on its own fate: Will it be bulldozed to make room for the new reservoir, or will a nearby town be targeted?

Dez has made her own difficult choice, marrying for comfort and security, not passion. Her husband is a businessman and landowner bitterly opposed to the reservoir project. Eager to start a family, he presses Dez for a commitment she’s reluctant to make. With the arrival of Jacob Solomon, a Jewish artist and traveling salesman, she confronts romantic and artistic longings in herself that leave her guilt-ridden and confused.

When Dez paints a series of images capturing Cascade’s plight, a national magazine uses them to illustrate stories about the town, temporarily lifting its spirits. In the meantime, a wave of anti-Semitism has begun sweeping across Europe and the United States. When Solomon is suspected of committing a serious crime, the wave bursts upon Cascade’s shores.

O’Hara first cast Enfield in a children’s story before beginning a short story that became the germ of her novel. In 2006, she committed to a full-length narrative, finishing “Cascade” in late 2010 and securing a book deal four months later. She left her Ploughshares job a year ago.

In Dez, O’Hara sees an artist who has little hope of becoming famous yet feels compelled to paint anyway, if only to nourish her own soul.

“I have friends like that,” says O’Hara. “They paint all day. Another is depressed if she doesn’t write every day. Many of us have things we’d really love to do, yet we have our responsibilities and commitments to other people.”

From the book’s very beginnings, she continues, a line from poet Seamus Heaney ran through her head. “He wrote, ‘You lose more of yourself than you redeem doing the decent thing.’ That stopped me in my tracks. Who really benefits in the end if you sacrifice all for others?”

The prepublication buzz around “Cascade” has grown steadily since this spring, when the Library Journal named it a “best bet” among upcoming first novels. Publishers Weekly highlighted the novel in its Galley Talk section, calling it “tightly woven” and one that vividly captures “the conflicting emotions that churn behind the human face.”

After years of doubting she could finish the book and get it published, “I feel really lucky,” O’Hara says.

“Cascade” is not the first book to fictionalize the building of the Quabbin Reservoir and what it meant for Enfield. William F. Weld, governor of Massachusetts from 1991-97, used it as backdrop for his 2003 novel, “Stillwater.” Jackie French Koller’s young adult novel “Someday,” published in 2002, also retold the story in fictional form.

Not unlike the novel’s protagonist, O’Hara has balanced family responsibilities with carving out the time to work on her art. In 1983, she gave birth to a daughter, Caitlin, who suffers from cystic fibrosis. Patients with CF, a genetic disorder that primarily attacks normal lung function, require nearly constant medical attention and frequent hospital stays.

Taking up freelance tech writing to help support the family, O’Hara spent much of her spare time, and many more hours, caring for Caitlin during her childhood. (Now 29, Caitlin lives in Boston and works as a graphic artist.) In 1999, in what she describes as “an early midlife crisis,” O’Hara enrolled in an MFA program at Emerson College. Tech writing gave way to creative writing. “Cascade” is the culmination of that process.

“In so many ways I’ve been obsessed with how we humans mark our existence,” reflects O’Hara. “A town exists, and then it’s gone. It happens all over the world, with natural disasters, and makes me think about how much we can really impact a place and time.”

Meeting a former Enfield resident still traumatized by his town’s fate, she says, has haunted her ever since. “The idea of a little kid looking down and imagining his home down there under the water, that really made me appreciate what they sacrificed.”