In the Boston Globe Magazine, Peter DeMarco examines whether plans for new bike paths and bridges will be enough to convince more than half of us to ditch our cars and become two-wheeled enthusiasts.

These significant off-street bikeways — existing, planned,and wished for — would create a much-needed backbone for Greater Boston’s cycling network. Scroll below the map for details on what the numbers and colors depict. 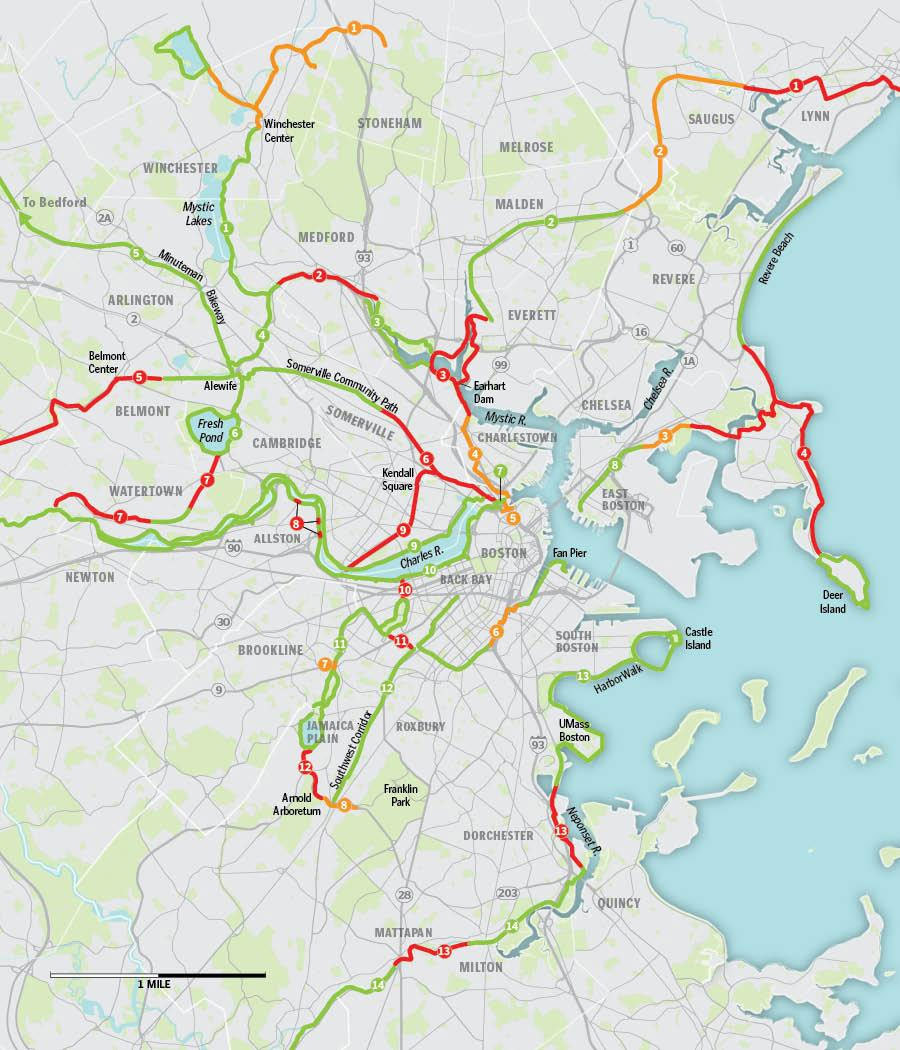 This map shows only major shared-use thoroughfares into Boston on dedicated trails, excluding most on-street bike lanes. It was compiled with help from cycling experts from the Metropolitan Area Planning Council, MassBike, the Department of Conservation and Recreation, The Boston Cyclists Union, The Charles River Conservancy, Northeastern University’s College of Engineering, and Boston and Cambridge planning and transportation officials.

IN ORANGE: Major planned bikeways/shared-use paths
1.* Tri-Community Bikeway from Winchester Center to Stoneham
2. Bike to the Sea extension through Revere and Saugus recently approved
3. Extension of East Boston Greenway to Constitution Beach via Massport agreement
4. Multiuse path along Rutherford Avenue from City Square to Sullivan Square within 10 years
5. Two bicycle/pedestrian bridges, one across the Charles River and one over railroad tracks near North Station, expected to be built by 2015
6. South Bay Harbor Trail to connect Southwest Corridor to Fan Pier
7. Bicycle- and pedestriancrossing improvements to Route 9 in Brookline
8. Bike paths to link Arnold Arboretum, Franklin Park, and Southwest Corridor once Casey Overpass is torn down in 2014

IN RED: Major missing links
1. Bike to the Sea path extension to Lynn Beach (not approved by Lynn officials)
2. From Alewife Greenway to the Medford side of the Mystic River
3.* From the Bike to Sea path in Everett to Rutherford Avenue in Charlestown
4.* Broken connections to Deer Island and Revere Beach
5. Through Belmont Center to proposed Mass Central Rail Trail
6.* From the Somerville Community Path to the Charles River; the path could be built in conjunction with the T’s Green Line Extension but is unfunded
7.* Along the Watertown Branch Rail Trail from Fresh Pond in Cambridge to Watertown Center
8. Bicycle and pedestrian underpasses proposed but unfunded for River Street, Western Avenue, and Anderson Memorial bridges along Boston side of the Charles River
9. Proposed but unfunded Grand Junction Pathway, linking Somerville Community Path to the Charles
10. Bowker Overpass between Storrow Drive and Boylston Street prevents connecting the Emerald Necklace with the Charles River
11. No off-street connection between Southwest Corridor and Fens
12. From Arnold Arboretum to Jamaica Pond
13. Missing links along Neponset River Greenway between UMass and Blue Hills Reservation

*Small portions of these are built or planned for.