No time for vacation time?

Why the majority of workers can't -- or won't -- take time off, no matter how secure their jobs are. 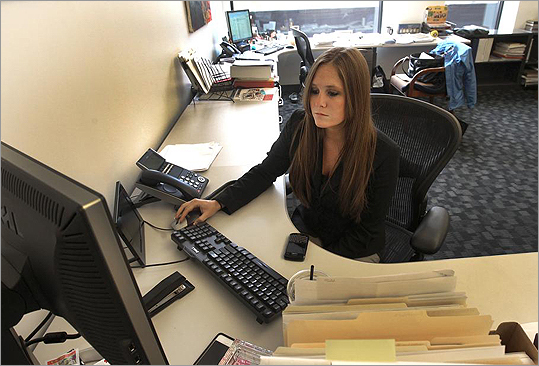 To be gone, or not to be. That is the question.

With peak vacation season looming, it’s certainly a question Meagan O’Hara and millions more like her have been asking themselves. Do I take all the time off coming to me? Can I really afford to, financially or otherwise? Or will I be returning to so much backlogged work that it’s actually less stressful to stay in the office rather than head for the beach?

This spring, O’Hara, 26, director of business development for a Boston office-relocation management firm, took the first full-week vacation of her working life — a Caribbean cruise — but not without some wariness. She’s held other jobs before — marketing assistant, executive assistant — that guaranteed her time off. Getting away for an entire week? That did not happen, she says, because her bosses might decide they could get along fine without her.

“I’d take a Monday or Friday off, but not full weeks or multiple days,” O’Hara says. “I kind of felt I wasn’t allowed to, even though the vacation days were well deserved.”

For younger workers like herself, adds O’Hara, leaving vacation on the table shows a willingness to do more than what’s expected. Fortunately, her current employer values taking time off. “If it’s not openly encouraged, though, you don’t take it,” she says.

According to a recent study by Harris Interactive, an Internet-based market research firm, 57 percent of Americans ended 2011 with unused vacation time, failing to take, on average, 11 of their allotted days off — or 70 percent of what they’d rightfully earned. Other national surveys have calculated that as many as 66 percent of us keep working when we could be kicking back somewhere, leaving unused a total of 459 million vacation days.

This mounting pile of bypassed perks has led to the United States being dubbed “no vacation nation” by Europeans and others who take long, leisurely vacations. Also creeping into the vernacular: “naycationers” (those who take little or no time off), “breakations” (lasting only three to four days), and, of course, “staycations” (time off taken close to home — or even at home).

“Anecdotally at least, you hear vacation deprivation is getting worse,” says John de Graaf, executive director of the Seattle-based organization Take Back Your Time. He co-wrote a 2009 bill mandating paid vacations for most American workers. (Submitted to Congress, it went nowhere.)

Given studies showing links between working too much — and too long without time away — and increased risk for health problems like heart disease and depression, says de Graaf, “It’s really very silly, particularly when vacations could be one way to reduce health-care costs.“ Yet job security, or lack thereof, skews our priorities, he maintains.

“Fear is the primary motivator,” de Graaf says. “When the economy’s weak, they think, ‘I’d better show I’m 110 percent committed to my job.’ And with companies downsizing and giving people more to do, the stress of coming back to hundreds of e-mails overwhelms the stress of staying at work.”

“Naycationers” also worry about being tethered to work via cellphone and e-mail while away, or paying for an expensive vacation — goodbye Vineyard summer rental! — during tight financial times, de Graaf says.

Sarah Nasnic and her boyfriend could go to Cape Cod for a week this summer, she says, “but what if the economy tanks tomorrow?” Nasnic, 25, who works in marketing for a Boston architectural firm, has two weeks vacation coming this year. She may not use them, though, partly to save money and partly to continue team-building with her new boss.

Previously, Nasnic worked for a smaller company where job responsibilities also kept her from taking sustained time off. The result was a happy surprise: $2,000 in unused-vacation pay when she left the firm. “At this point in my life and career, I’m not taking any long or lavish vacations,” Nasnic says.

Howard Goldman has tried to get away from the office more as his kids move through their teenage years. And yet he rarely stays away for long, although it has nothing to do with impressing the boss. Goldman is chief executive of Humboldt Storage and Moving in Canton, a company with nearly 100 employees.

“I’ve never taken my full vacation time,” he acknowledges. “One of the biggest issues for me is coming back to the enormous amount of e-mails that pile up, because the work doesn’t stop while you’re away.”

Only once in 20 years has Goldman taken 10 consecutive days off (his wife lobbied for two weeks) to travel overseas for his daughter’s dance competition. “It’s hard for me to take even a week off,” he says, “even though I have a great management team to handle things when I am gone.”

Paradoxically, notes Boston University sociologist Juliet Schor, the pressure to stay working is felt both in boom times and bad ones. When business is going well, employers tend to increase individual workloads, hoping to keep the enterprise running smoothly. During downturns, employees worry their jobs will grow more difficult, or even disappear. Decisions about taking time off often hinge on assessing individual risks and rewards.

“In the higher ranks (of companies), not taking vacation time is more about not getting the job done,” says Schor. “Whereas at the bottom of the market, employees can often cash out on unused vacation time when they leave. For them, it becomes a financial strategy.”

Is there a price to pay for squandering vacation, even if it means more money in one’s pocket? “Yes,” says Schor. “Common sense says the ability to step away from the work is very important.”

Harvard Business School professor Leslie Purlow’s new book is titled “Sleeping With Your Smartphone: How to Break the 24/7 Habit and Change the Way You Work,” based on her work with The Boston Consulting Group, the well-known professional service firm. Purlow focuses on what she calls “the great impossibility” of taking “pure, guilt-free time off” at a company like BCG, whose clients expect 24/7 access.

Since she began her study of BCG, the firm has organized itself into hundreds of smaller teams that systematically plan their time away from work, a process initially christened PTO, short for “predictable time off.” At first, that meant one night a week without checking e-mail, text, or phone messages. But it has grown to encompass planned vacation time, too.

“Even though it sounds counterintuitive, the very act of planning makes them rethink what they do, what their priorities are,” says Purlow. Among the benefits, she adds, are improved employee retention, better work-life balance, and increased productivity, adding value to what the firm does for clients.

BCG project manager Jon Swan agrees that “refreshed brains tend to be more productive ones,” as he puts it. But a company culture must encourage such thinking. One friend of his who works in banking was told not to take his family on a cruise, says Swan. Why? Because in a work emergency, he’d be stuck at sea and unable to fly home. Instead, his friend took his family to a destination located near a major airport.

Swan went a different route last fall. After months of planning, he took his family on a four-day, midweek trip to Disney World, an ongoing work project notwithstanding. “I’d built the right coverage model,” he says, and having that flexibility “became an important part of the project.”

Winthrop town manager James McKenna has no such flexibility, he says, which is why he won’t use three of his four weeks vacation time this year. Again. With hundreds of town employees working under him, that’s a luxury he cannot afford.

Municipal governments have seen a lot of budget cuts in the last decade,” says McKenna. “As a manager, you’re not as free with your time. There’s virtually no backstop, like there is in the private sector.

“Vacation seems more of a luxury now,” McKenna says. “I’d like to spend more time with my family, but I’m not holding my breath.”