Can they make over Boston?

A group of activists and entrepreneurs are determined to make the city more appealing for young professionals. And they're prepared to step on some toes in the process. 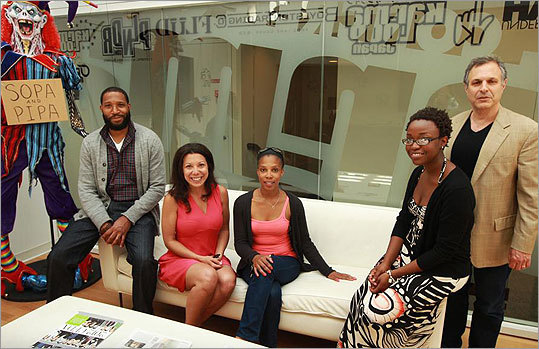 They are familiar issues that have been bandied about for decades: What can Boston do to stem its post-collegiate brain drain? Why won’t the city allow nightclubs to stay open later than 2 a.m.? Is there a way for the financially troubled T to continue operating past 12:30 a.m.?

Despite discussions, shoulder shrugs, and occasional attempts at change — remember the Night Owl bus service? — the questions still swirl. But seldom have they gotten so much attention or stirred as much controversy as they have recently thanks to the arrival of a new organization called the Future Boston Alliance.

There is no shortage of media buzz surrounding the Future Boston Alliance and its mission to change what it sees as the city’s stodgy reputation. The group, which now boasts roughly 50 members, says it expects the effort to be complex and they’re in it for the long haul.

“We’re not so naive that we can solve the T’s budget problems, change the hours of night clubs in the city right away, or change the perception of the city in a week,” says Greg Selkoe, 37, owner of the successful online clothing business Karmaloop and the financial backer of Future Boston Alliance.

“That’s only a small portion of what we’re about. This is an organization that we want to exist for a long time. It’s really about the long-term vision and having a progressive voice that’s going to advocate for young, creative, entrepreneurial types.”

The headlines surrounding the group and its goals have focused on increased taxi service, more liquor licenses, and late night hours for businesses such as gyms and restaurants. But look deeper and the mission goes beyond sexy, attention-grabbing topics. Future Boston Alliance director Malia Lazu, 35, says the focus needs to be on the city’s cultural vibrancy; issues of later hours and improved transportation will be easier to address down the line.

“It doesn’t start with bars staying open later,” Lazu says. “The conversation we’re trying to have is how do we have more cultural diversity. So when you start to talk about what does a vibrant society look like, then yes, liquor licensing becomes a part of that. But I think it’s going to give us a broader context for the conversation. And I think up until now it hasn’t been the case.”

Future Boston arrived with much ballyhoo last month when it posted a video on its website (www.futureboston.com) declaring that “Boston is less than the sum of its parts.” It went on to say that, “The regulations, out-of-date outlook, and power structure are holding our city back.”

It struck a nerve. The loquacious Selkoe, who is pledging $200,000 to the group, and Lazu have become lightning rods as they call for change in a city that they say is generally an unappealing place for creative young professionals to live.

That video also takes aim at Mayor Tom Menino. “We don’t want our city to be a place that bans moshing or tells Nike what kind of shirts they can put in their windows,” it says.

Those complaints have drawn the ire of City Hall. Dot Joyce, spokeswoman for Mayor Menino, defended Boston’s late-night scene, saying the closing times in Boston are the same as San Francisco, Seattle, Austin, and Denver.

“We like to work with people in a spirit of collaboration and cooperation and shared concerns," says Joyce. “Unfortunately the video that was produced did not come across in the spirit of working together. If you’d like to work with people toward a better Boston, there are many groups that do that very well and usually they don’t start in such a very antagonistic manner.”

Joyce counters that census data shows that Boston is gaining young professionals, not losing them. Boston has the highest proportion of 20- to 34-year-olds among the nation’s biggest cities, according to 2010 Census figures analyzed by Boston’s Redevelopment Authority. Nearly 220,000 Bostonians reported that they were in that age range, an 11 percent increase in that demographic from the 2000 Census.

She points to the 2010 Census that found that the city gained 6,000 adults between the ages of 25 to 30. In comparison, she said, San Francisco lost 7,000 adults in that demographic.

Many of those involved in the Alliance say their focus is not on politics, but enriching cultural offerings that make Boston welcoming to young professionals.

“I think we should still be able to be critical of each other and work together,” says Michael Monestime, 33, manager of partnership marketing at Zipcar and a member of Future Boston Alliance. “We’re not trying to put City Hall in a headlock.”

Criticism from City Hall has not slowed enthusiasm for the group. Lazu says roughly 4,000 people have expressed interest in getting involved in recent weeks. Selkoe says donations for the nonprofit have totalled more than $50,000.

Those involved in the Alliance say that there is a sharp focus in Boston on technology, academia, and health care, which are all essential for the local economy. What gets lost in the mix, they say, is an emphasis on cultural offerings for Generation Y.

“We really feel like we have a split cultural scene,” says Lazu, who previously served as the executive director of MassVOTE, a coalition to increase voter turnout.

“There’s a ton of things for college kids. There’s great things for empty nesters. But there’s really nothing for younger professionals or younger families. It’s not that we don’t have anything, it’s that sometimes it just feels that way.”

It’s a familiar issue for Jeanne Dasaro, 30, an alliance member from Dorchester who describes herself as a media entrepreneur. She says she got involved with the organization because there are few activities between loud college-focused nightclubs and established cultural institutions such as the Boston Symphony Orchestra.

Urban planner James Kostaras, a West Roxbury resident and urban planner who works at the Institute for International Urban Development in Cambridge, says that the Alliance will also focus on business initiatives to encourage creative and technology-based jobs.

Adding a focus on jobs will give the group “more credibility with the wider business community when it advocates for keeping dance clubs open late, improving poor taxi service, and loosening up on regulations and licensing that throw a wet blanket on nightlife,” Kostaras says.

Others agree that jobs, not night life, are the real concerns. Susan Fontana, metro regional director in Boston for ManPower and not a member of the Future Boston Alliance, says the issue with students leaving the city upon graduation has less to do with cultural vibrancy and more to do with limited training programs and internships that help students find jobs in the area.

Selkoe says finding and retaining talent has been a challenge for his business and was a factor in starting the organization.

“When my employees move here, they’re often unhappy,” says Selkoe. “They’re also DJs, they’re artists, and they’re frustrated that the T closes so early, that they can’t get good food late at night. People want to talk about Boston’s night life because it’s screwed up and weak, because it is. But it’s just a small part of the picture.”

According to Ace Gershfield, 32, president of 6one7 Productions, early closing times are often a shock to out-of-towners and international clients who generally don’t start their evening until midnight or 12:30 a.m. But he says the lack of 18-plus club nights sets a tone and a reputation for the city which sticks with college students here.

“There’s a huge population of college kids who can’t get into clubs,” he says. “And then they face early closing times when they finally can. I think it all has an effect on where they end up. I know I’ve lost a lot of really talented friends to other cities.”

Members of the Alliance are not saying that they expect Boston to have the breadth of cultural offerings available in a city like New York, but incremental changes could make a big difference. Monestime, who left Boston to start a business in New York, and then returned here after selling it, said that small tweaks, such as more street fairs of the sort he saw in Brooklyn, would go a long way toward enhancing Boston’s profile.

James Pierre, 37, who founded Cambridge’s Arts in the Park program, says he became involved in the Alliance as a way to make changes in the area rather than simply complaining about problems. He said he’d like to see changes to quell the jabs he gets from out-of-town friends.

“People will ask me what I’m still doing here,” Pierre says. “They ask as if I should be ashamed that I’m still in Boston. It’s like they think I’m still living in Mayberry. That’s an exaggeration, but I think you know what I mean.”