One man’s suspicion, obsession, and an unsolved murder 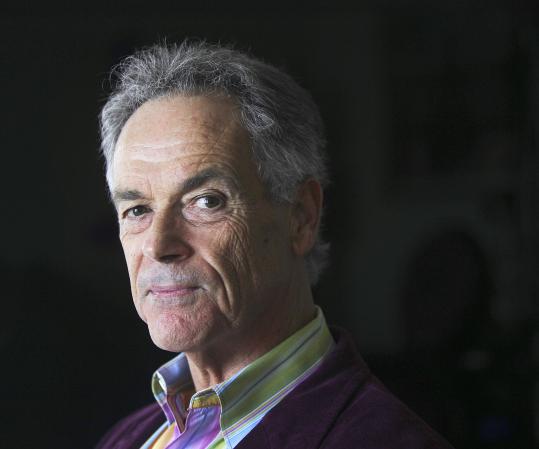 BEVERLY — Next year marks the 50th anniversary of John F. Kennedy’s death, inviting a fresh deluge of books, articles, and documentaries about JFK’s murder and legacy, a legacy colored by ongoing revelations of Kennedy’s many extramarital affairs.

It’s doubtful, though, that any forthcoming book will get more personal, or more conspiracy-minded, than the new one produced by Peter Janney, 64, a Beverly psychologist and first-time author.

Yet Janney maintains that his book is neither fictional nor far-fetched, based upon what he knows about the life and times of Mary Meyer, whose 1964 slaying in a Washington, D.C., park remains officially unsolved.

“She was not just another sexual fling for Kennedy,” Janney said in an interview at his home. “Theirs was really a substantial relationship.”

Such was Meyer’s impact on Kennedy, Janney maintains, that she helped soften his hard-line Cold War mentality, steering the president toward a vision of world peace before an assassin cut him down.

Janney is not the first to reveal details about the Kennedy-Meyer relationship; other published works have documented it. It’s no secret, either, that Meyer, an artist and aristocrat with a bohemian bent, had befriended Leary in the early 1960s and had touted the virtues of psychedelic drugs. Well-publicized, too, was the trial of her accused killer, a black man named Ray Crump, which transfixed Washington in 1965. Crump was found not guilty and the gun used to kill Meyer never recovered, leaving many unanswered questions of who killed Meyer and why.

For years after Meyer’s murder, Janney writes, he was haunted by her memory, and by his own childhood connection to the Meyer family, fueling his drive to see this project through.

Not only had his parents and the Meyers been close friends, but both his father, Wistar Janney, and Mary’s husband, Cord Meyer, were high-ranking CIA officials. The social circles in which they moved included powerful politicians, journalists, and government officials. And among the most glamorous women in that Camelot-era circle were the Pinchot sisters, Mary and Tony.

Among Janney’s theories is this jaw-dropper: that Wistar, who died in 1979, knew in advance that Meyer had been targeted for murder – a murder ordered by the CIA because Meyer had read the Warren Commission Report on JFK’s assassination, disbelieved its findings, and was prepared to say so publicly. The report, released to the public three weeks before Meyer was killed, blamed JFK’s murder on Lee Harvey Oswald alone and not on some broader conspiracy.

Janney sees history differently. He’s convinced that the CIA, feeling threatened by Kennedy’s mistrust of the agency after the Bay of Pigs fiasco in Cuba, conspired to have the president killed, then eliminated Meyer as part of a coverup.

“The whole scene around Mary’s murder was orchestrated by the CIA, and my father was part of the team,” Janney said. Like a Greek tragedy, he added, “the sins of the father are being visited on the son.”

Janney says he and his father grew apart in the 1960s and ’70s, largely over differences about the Vietnam War and the CIA’s role in it. Is it possible that their estrangement hardened or distorted his view of who had motive to kill Meyer?

“I’ve done a lot of work on myself, in therapy and elsewhere,” Janney said. “My identity isn’t centered around my family, or loyalty to them.” Friends tried to dissuade him from plunging into this story, he added, “but I reached the point where I felt, history matters. Truth matters. If our country won’t confront the mistakes we’ve made, we’re destined to keep making them. I really believe that.”

A young life in Washington

Janney’s journey to authorship began, in a sense, in the Washington of his childhood, a world peopled with figures like Benjamin Bradlee, the future Washington Post executive editor, and CIA counterintelligence chief James Angleton, another family friend. Mary Meyer’s sister, Tony Pinchot, was married to Bradlee, who was also personally close to Jack and Jackie Kennedy.

Janney left D.C. for prep school in 1962 and then went on to Princeton. He later earned a doctorate from Boston University and practiced psychology in the Cambridge area for two decades. In 2003, frustrated by the impact of managed health care on his practice, he earned an MBA from Duke University, then worked for a nanotechnology company. Yet he kept circling back to the Kennedy-Meyer saga, he says, drawn by other researchers who’d embarked on the same mission.

One was Nina Burleigh, who interviewed Janney for her 1998 book, “A Very Private Woman: The Life and Unsolved Murder of Presidential Mistress Mary Meyer.” While Janney was dissatisfied with many of the book’s conclusions — principally, that Crump had killed Meyer and gotten away with it – he optioned its film rights. He collaborated on a screenplay, but a movie deal never came to fruition.

Another author, Leo Damore, met with Janney in 1992 while working on his own Meyer project. Damore had written a bestseller about Senator Edward Kennedy and Chappaquiddick, and he was hot on the trail of Meyer’s killer, or so he confided to Janney. Damore never finished his book, however. In 1995 he committed suicide. Years later, Janney bought Damore’s research files, using them as the basis for “Mary’s Mosaic.”

According to both Janney and Smith, Damore had come to believe that Meyer’s killer was a man named William Mitchell. A shadowy figure who testified for the prosecution at Crump’s trial, Mitchell had been in the park at the time of Meyer’s murder yet had vanished in the wind after the trial; efforts to locate him through military records, phone book listings, and other means proved futile. Missing, too, by various accounts, is Meyer’s personal diary, whose whereabouts and contents are yet another piece of the JFK-Meyer puzzle.

In his 1995 memoir, Bradlee recalled hurrying to Meyer’s house and then her studio, frantically trying to locate the diary. Twice he found Angleton already there, on the same quest. A notebook of Meyer’s containing sketches and some writing was discovered by Bradlee, who turned the document over to Angleton. It was then, Bradlee wrote, that he first learned of her affair with JFK. Yet many, including Janney, believe another diary exists, containing far more detail about Kennedy, their relationship, and why he, too, was murdered.

Most key figures in Janney’s book are long gone. James Angleton died in 1987, Cord Meyer in 2001, Tony Pinchot Bradlee just last year. In 2007, Janney interviewed Ben Bradlee but says his memory of long-ago events was not that sharp. Now 90, Bradlee, through a family member, had no comment on Janney’s book.

Janney has also sent copies of the book to congressional leaders and Justice Department officials, asking that Meyer’s murder be reinvestigated. He’s had no response.

“Mary’s Mosaic” is published by Skyhorse Publishing, an independent, New York firm founded in 2006. In addition to sports, nature, and business books, Skyhorse has also published other conspiracy-minded titles such as “LBJ: The Mastermind of the JFK Assassination” by Phillip F. Nelson, “O.J. Is Innocent and I Can Prove It,” by William C. Dear, and “American Conspiracies: Lies, Lies, and More Dirty Lies that the Government Tells Us,” by Jesse Ventura and Dick Russell.

Associate publisher Bill Wolfsthal said Skyhorse took on Janney’s book because it “brought something new to the table,” tying Meyer’s murder to JFK’s and to lingering suspicions about covert CIA operations. “Peter doesn’t prove his case beyond a reasonable doubt,” Wolfsthal acknowledged. “But whether you believe in conspiracy or not, it’s a fascinating read.”

Janney has his doubters, certainly. Nina Burleigh, for one, posted a long review of Janney’s book on the Daily Beast website. Reaffirming her belief that Crump most likely killed Meyer, she wrote that any proof linking the CIA with the murders of JFK and Meyer “may always be tantalizingly out of reach.”

Journalist Tim Weiner, who covered the CIA for 20 years and wrote “Legacy of Ashes: The History of the CIA,” is even more skeptical.

“You could fill a five-foot shelf with books theorizing the CIA played a role in Kennedy’s assassination,” Weiner said, calling such efforts “hearsay, innuendo, gossip, and nonsense.”

In fact, says Weiner, there are legitimate reasons to question the Warren Report and its findings about Oswald — but not, he says, to accuse the CIA of conducting domestic assassinations. “The bottom line is, there’s not a shred of evidence – none — that the CIA ever killed anyone in this country.”

Janney, however, said he is comfortable with the scenario he’s laid out, no matter how it treats his father, a career CIA man allegedly involved in a conspiracy that cost Mary Meyer her life.