Confessions of a serial exclamation pointer 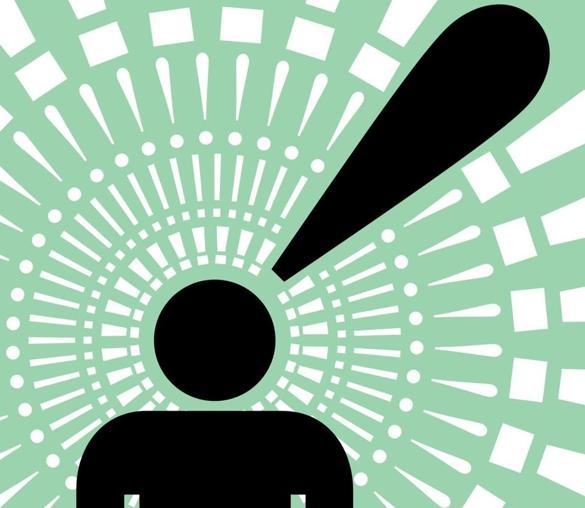 I can still remember the pact I made with a co-worker five years ago. We began to notice an alarming increase in the number of exclamation points crammed into e-mails and text messages. False enthusiasm was giving us a headache. The English language had taken enough of a beating, and there was no need for this kind of sucker punch. We would have no part of it.

The problem was that nearly every e-mail I received ended with an overzealous “Thanks!” E-mails and texts cheerfully chimed “Can’t wait to see you!,” and I recall more than a few “How are you!” e-mails. Since when did an exclamation point wrestle a helpless question mark into submission?

The co-worker and I agreed that we would not fall prey to the trend. But I’m now ashamed to admit that I’m just as guilty as those I once chided. I’ve become a serial exclamation pointer.

Before you judge me, Judy, hear me out. Without an omnipresent exclamation point, my electronic communication sounded as if it was written by a certain curmudgeonly and crusty green muppet who resides in a trash can. I could feel the shame creeping into my fingertips the first few times I started adding this faux emphasis to pleasantries. Now there is no turning back.

This exclamation epidemic has become so dire that there’s now a name for it – the very unpleasant slang bangorrhea. Urban Dictionary goes a step further by calling bangorrhea a “grammedical” condition. Even grammar snobs are fighting figurative infection.

“Even though I know better than to use stunt punctuation instead of thoughtful language, I often find my hand hesitating over the exclamation point,” confesses Martha Brockenbrough, author of “Things That Make Us [Sic]” and the founder of the blog the Society for the Promotion of Good Grammar. “Should I use one? Does it seem amateurish? Without it, does my e-mail sound bossy and abrupt?”

When is an exclamation point appropriate? Merriam-Webster defines it as “A mark ! used especially after an interjection or exclamation to indicate forceful utterance or strong feeling” or “a distinctive indication of major significance.”

Does “Thanks!” or “See you later!” fall under either of those definitions? Those of us who learned our grammar from the Saturday morning “Schoolhouse Rock’’ animated shorts may disagree. Allow me to quote from the 1974 song “Interjections!”

“Interjections (Hey!) show excitement (Yow!) or emotion (Ouch!)./ They’re generally set apart from a sentence by an exclamation point,/ Or by comma when the feeling’s not as strong.”

These lessons were drilled into my brain between episodes of “Scooby-Doo.” By high school, I saw enough red ink on my research papers to know an exclamation point was for excitement only. But in the digital era, a sentence without an exclamation doesn’t pack the same wallop it once did.

I’m not the first, and certainly not the last, to speak up about exclamation point abuse. Author Terry Pratchett famously said, “Five exclamation marks, the sure sign of an insane mind.” F. Scott Fitzgerald offered, “An exclamation point is like laughing at your own joke.” Everyone from Mark Twain to Craig Ferguson has spoken out against this inhumane treatment of punctuation.

It would be easy to blame text-happy tweens for the exclamation point avalanche. I’m not one to point fingers, but I’m going to make an exception and point in the direction of David Shipley and Will Schwalbe. In 2008, they wrote a book called “Send: The Essential Guide to Email for Office and Home.” It created a minor sensation, partially because the authors condoned the use of exclamation points.

A round of talk shows and cheeky feature stories followed. The exclamation point door was ajar, and now there may be no shutting it.

“In e-mail, I think that exclamation points serve some useful functions, because they can convey extra meaning in brief messages,” says Jean Berko Gleason, a Boston University psycholinguist. “They can mitigate the brusqueness of a brief reply by indicating the writer’s enthusiasm, sincerity, surprise ­— it all depends on the situation.”

Given that even academics are warming up to e-mails peppered with exclamation points, I feel like the dowager countess from “Downton Abbey.” I’m rolling my eyes at change and bemoaning crazy new things, such as electricity, weekends — and the overuse of exclamation points in e-mails.

Fortunately, I found a cranky kindred spirit in Jeff Rubin, the founder of National Punctuation Day. Mark your calendar, that holiday takes place on Sept. 24.

“That particular punctuation mark conveys a very special message,” Rubin says. “More so than most punctuation marks. It’s overused in text messaging and e-mails. That’s mostly where you see it. If you go back 20 or 30 years before we had this stuff, I saw the same thing in handwritten letters. I have friends who used to write to me longhand and use 10 exclamation points.”

Author and former social media coach Judy Dunn ponders the same question that troubles me about the exclamation epidemic: “When you overuse it, it takes the power out of it. So what am I supposed to be excited about if it’s everywhere? If everything is exciting then nothing is exciting, because it’s all the same.”

Turns out, a lot of us are really excited about nothing.

“That’s what the exclamation point has become,” she says. “The ambassador of good intentions.”

Because I realize there is no winning this fight, I’ve started to think of a compromise: A new punctuation mark. It should fall somewhere between a period and an exclamation point, and be reserved exclusively for e-mail. I’m not the only one who’s had this thought.

Also suggesting a new punctuation mark is Lera Boroditsky, an assistant professor of psychology at Stanford University who studies language and cognition. But in the meantime, she tries to soothe my exclamation-battered nerves by looking on the bright side.

“Let me give you an answer, and hopefully you’ll feel less offended by the exclamation point. People are using the written word in a much more conversational manner,” Boroditsky says. “What people do with written language is that they adapt it to meet their needs.”

Boroditsky tells me I should welcome this evolution, because the more communicative we are in e-mail and text messages, the better our emotions will be understood.

Following her advice, I’m going to embrace the exclamation point for just a sentence to make sure my feelings on the subject are not misunderstood.

Thanks, I feel much better now.