Dad, can you put away the laptop?

Parents have long been worried about how much time their kids spend online. But if you ask the kids, mom and dad are the ones who can’t turn away from the screen. 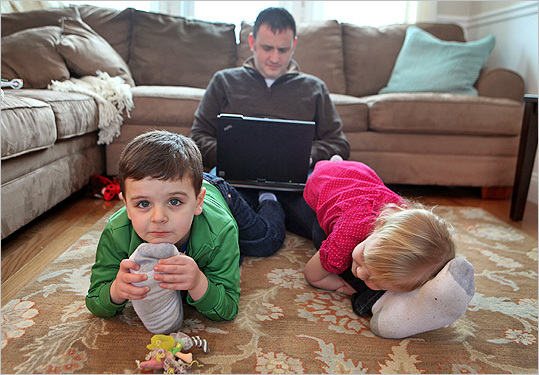 (Michele McDonald for The Boston Globe) David Mangan works on his laptop while hanging out with his children, Aidan and Keira. Sometimes he asks them to “give me 10 more minutes,’’ he says.
By Beth Teitell Globe Staff / March 8, 2012
Text size – +

Forever, the screen-time battles between parents and children have gone decidedly in one direction, with the mothers and fathers nagging and threatening, and the kids fighting to stay connected to their digital devices.

But guess which family members are disgusted now?

“You can’t get my mom off that phone,’’ said Lucas Finzi, 7, a Brookline second-grader. He and his brother have tried shaking their mother’s iPhone from her hands, and turning it off while she’s mid-correspondence, to no avail. “We’ll be at the dog park and she’ll just start texting someone,’’ said Miles 10.

In Natick, little Aidan and Keira Mangan have the same problem with their father. The 4- and 3-year-old pound on David Mangan’s laptop’s keyboard to get his attention, stick their heads between him and the screen, and even fabricate potty-training accidents.

“Sometimes I bargain with them,’’ David said, sounding more like a middle schooler pleading to finish one more drive on the Madden NFL 12 game than the professional pharmacist he is. “Just give me 10 more minutes.’’

Kids have always fought household rivals for their parents’ attention, of course. But competing against a phone attached to a kitchen wall or a newspaper is nothing compared with going head-to-head with Facebook or Angry Birds. No one has calculated the number of iPhone (or tablet or laptop) orphans. But children who dream of talking to or playing with their parents without mom or dad stealing a glance at a screen may find it increasingly difficult.

Almost half of Americans - 46 percent - now own smart phones, up from 35 percent last May, according to the Pew Research Center’s Internet & American Life Project. With the growing mobile connectivity has come increasing expectations from employers - and also from friends and family - that e-mails, texts, and tweets will be responded to immediately.

Toss in the siren call of ESPN’s ScoreCenter and it’s no wonder the kids are starting to push back, said Michael Rich, director of Children’s Hospital Boston’s Center on Media and Child Health.

He sees patients, particularly adolescents, who throw their parents own digital addiction right back at them. “Why should I disconnect when you don’t?’’ they ask.

On the other end of the spectrum, Rich said, he’s starting to see kids who are cutting back on screen time after witnessing their parents’ behavior. “Some of the kids are saying, ‘I don’t want this for myself.’ ’’

But pity the parents, too. Many find themselves pulled between work and family, unable to disconnect from their jobs, but unwilling to miss time with their children, even if it means texting while junior is kicking the winning goal.

“If I didn’t have [a smart phone] I wouldn’t be able to do both, and that would be stressful and sad,’’ said Amy Kershaw, an assistant commissioner of the state’s Department of Children and Families - and the mother of Lucas and Miles Finzi.

“They can’t really appreciate that if I spend 15 seconds to respond to an e-mail then no one’s waiting for anything from me, and that means I can be at the school play or concert,’’ Kershaw said. “Hopefully some day they’ll understand.’’

What’s happened to parents? A very small percentage of Americans - under 10 percent - are clinically addicted to technology, said David Greenfield, a psychologist who directs the West Hartford, Conn.-based Center for Internet and Technology Addiction. But about 65 percent of people definitely abuse it, he said.

“We’ve created portable slot machines [in the form of smart phones and tablets],’’ he said. “What we know about slot machines is that a reward comes to you in an unpredictable fashion. Similarly, when you go on a digital device, you don’t know what you’re going to find. And every time it leads to something pleasurable, you get a hit of dopamine.’’

Those intermittent rewards - in the form of a juicy text or a great deal on Tory Burch flats - keep people coming back for more, said Greenfield, author of “Virtual Addiction.’’ “But they don’t realize it because they are being controlled by the technology.’’

Some kids, it must be noted, are more than happy to see their parents in the grip of technology. As Nancy Roosa, a Medford mother of two teenagers, and a psychologist, put it: “My kids unfortunately don’t tell me to step away, they are happy just to pick up their own screen and have me ignore them!’’ And some kids simply want their parents to put down their phones so they can use them.

But many kid cops are sincerely bothered by their parents’ screen habits. When Paula Touliopoulos’s 9-year-old daughter “caught’’ her typing an hour past when the Boston mom promised to stop working, the little girl admonished her. “What are you doing?’’ Arianna asked, appalled. “Texting?’’ “Never mind that you can’t text from a computer,’’ Touliopoulos said, her daughter was spitting out the worst word she could conjure.

Reports of such shaming are not uncommon. Barb Stein, an architect in Boston, recalled the day one of her daughters and a pal decided to pretend they were moms at the playground. “They both started pushing the swing with one hand and held the other hand up to their ear as if talking on the phone,’’ she said.

“They’d have a few bites of food and then open their phones,’’ said Audrey, a fourth-grader at Sudbury Valley School in Framingham. “I told them they shouldn’t always be on their phones because we barely get to see each other. I only really see them in the morning, when we’re rushing to get to school, and at dinner. I felt kind of ignored.’’

Incredibly, her parents looked up from their phones, listened, and made a conscious effort to cut back on their digital habits. “I’m really proud of them,’’ the 9-year-old said.

Missed connections in our digital lives
Surveys
Your comment is subject to the rules of our Posting Policy
This comment may appear on your public profile. Public Profile FAQ