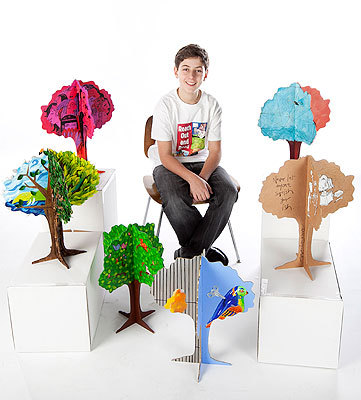 He loves to read books. With pages. “I personally do not own a Kindle or anything like that,’’ said Isy, a seventh grader at Solomon Schechter Day School of Greater Boston. “I love the sound of a page turning, for some reason.’’

For some reason, he also feels compelled to encourage other kids to turn pages. So when the time came to prepare a project for his November bar mitzvah, he thought up an ambitious fund-raising idea to buy books for needy children. He wrote to hundreds of artists across the country and asked them to create a work of art that could be auctioned to raise money for books.

He was inspired, he said, by a favorite children’s book, Shel Silverstein’s “The Giving Tree,’’ which has an underlying message about generosity. He e-mailed some 300 artists and illustrators and asked them to paint or illustrate a three-dimensional cardboard tree, which he had manufactured in Colombia. (It was cheaper there, he said.)

Hoping that artists would not only respond but that “each artist would make an incredible, very different tree,’’ Isy’s plan was to donate the trees to Reach Out and Read, a nonprofit that promotes early literacy, to be auctioned at their annual fund-raiser.

It was hard to know where to start: He only knew one artist, his school art teacher. He found others by searching illustrators and artists on the Web, contacting artist associations, through referrals from Reach Out and Read, and by shooting for the stars. He wrote, for example, to glass artist Dale Chihuly, whose work he’d seen at the Museum of Fine Arts. (“If he wanted to do a glass tree, Isy was all there for it,’’ said his mother, Becky Behar.) He wrote to Michelle Obama. She isn’t an artist, but she’s big on children’s literacy, Isy explained.

The question was: Would any of the artists come through for him? At first it didn’t look good. It took about 50 e-mails before he even got a response.

A few, including Chihuly, said they wanted to participate but didn’t have time, so they sent autographed books and prints. Michelle Obama’s office sent him a supportive if generic e-mail.

But about 35 artists did respond, and those who did threw themselves into the project with such enthusiasm that their trees will be exhibited at the Danforth Museum and School of Art’s Children’s Gallery in Framingham, beginning in May. The auction, held online, will run concurrently.

“Not only was it for a good cause, I thought it would be fun to do,’’ said Lin, author of “Where the Mountain Meets the Moon,’’ among other books.

“It was a lot of work but Isy’s a great kid with a great idea,’’ said Boston painter Julie Barrett , who came up with a “Charlotte’s Web’’ theme, complete with an intricate fiber spider web and spider.

Many of the artists said they responded because they were touched by Isy’s earnestness. “I participated in the project because the idea of giving needs to be nurtured,’’ said John-Paul Jimenez, a Boston research scientist, painter, and children’s book author. “When honest sentiment and good intentions are at the core of a project it is an honor to be asked to participate.’’

For his part, Isy said he never doubted that the project would work out. “In my opinion, mine is a very different and cool idea,’’ he said, reflecting on the forest of cardboard trees on his living room coffee table. “Not a very high percentage e-mailed back, but the ones who did were thrilled I was doing this project.’’

And so is Isy, who is on a personal mission to spread the word about books. Twice a month he goes to a Roslindale clinic to read to children in the waiting room; he once forced a friend who was a reluctant reader to try a series of books Isy was sure would convert him.

“I sort of sat him down and gave him a book and he loved it, and has been reading ever since,’’ he said proudly. “Sometimes when people say they don’t like to read, the truth is they just haven’t found a book they like.’’