A young man with a plan 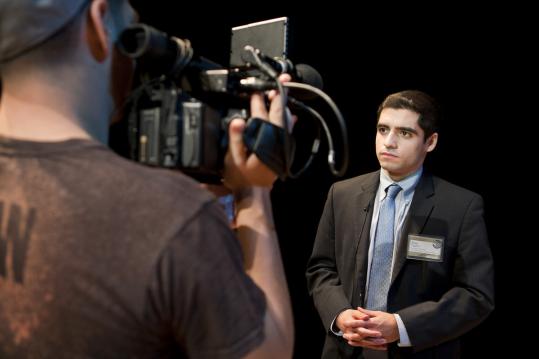 Sam Vaghar has connected with college students as well as politicians, celebrities, and people in the music industry . (Kayana Szymczak for The Boston Globe)
By Joseph P. Kahn Globe Staff / October 1, 2011

Speaking to an overflow crowd inside Harvard University’s Memorial Church, Sam Vaghar delivered his opening address to the Millennium Campus Conference, a gathering two weeks ago of 1,200 students from around the country united in fighting global poverty.

The day’s schedule was running late, so Vaghar got straight to the point. “I want to challenge all of you to think critically about two things,’’ said Vaghar, executive director of the Boston-based Millennium Campus Network. He urged attendees to focus on results and not simply their good intentions. “Don’t just think about why you care, but how do we actually have an impact? The ‘why’ is incomplete unless we can answer the ‘how.’ ’’

Activists “need to get our egos out of the way,’’ he added, and not worry about who gets the credit.

Two days later, in the Back Bay offices where MCN is headquartered, Vaghar circled back to that theme. “This work is really difficult, there’s a real focus on the leader. And I struggle with that,’’ he said. “Look, I don’t have all the answers. I’m 25.’’

With 57 member organizations on 23 campuses, MCN is clearly more than one individual, no matter how skilled Vaghar is at fund-raising and conference-organizing. Nevertheless, Vaghar’s profile is rising as organizations under MCN’s umbrella show they can make a difference.

Vaghar flew to Sarajevo last week for meetings with educators from Eastern Europe and the Balkans. Sponsored by the US State Department, his trip underscored MCN’s mission - to mobilize student groups and increase their clout, at home and abroad.

He’s spoken at the United Nations and has forged ties with USAID, the global humanitarian agency. Last June, Vaghar attended a White House summit meeting of youth leaders, his third such visit and the first at which President Obama stopped by to share a few thoughts.

In his typically forthright style, Vaghar slipped the president a note inviting first lady Michelle Obama to an upcoming MCN conference. The president seemed surprised, Vaghar recalls, saying, “One day, Sam, you might be sitting on this side of the table.’’

A world view Vaghar’s family roots are international: His father, a civil engineer, grew up in Iran, and his mother is British. The two met in England after Vaghar’s father fled Iran during the 1979 revolution. The couple later settled in Newton, where Vaghar attended Newton North High School.

Family trips exposed Vaghar to a wider world. One such trip to Cuba 10 years ago was particularly eye-opening, he recalls. In Havana, he was approached by a group of street kids who stole his wallet. With police all around, they had taken a tremendous risk. “I remember thinking: What does that say about the level of poverty in Havana?’’ Vaghar said. It was one of many “aha’’ moments when he began thinking hard about inequities in the world.

At age 11, Vaghar was diagnosed with Crohn’s disease, a chronic inflammation of the intestines he manages these days with diet and medication. Partly because of his condition, he mostly kept to himself as a teenager.

“I was telling Eliza Dushku the other day’’ - the actress is one of several celebrities and politicians who attended last month’s conference in Cambridge - “that I was a loser in high school, that I hadn’t found myself and didn’t really fit in,’’ Vaghar admitted, somewhat sheepishly.

He enrolled at Brandeis University, resolving to be more social - and to get more involved in social issues. His first campus group traveled to Washington for an antiwar demonstration during the Iraq war. However, it was reading economist Jeffrey Sachs’s book “The End of Poverty,’’ that was Vaghar’s next big “aha.’’ Sachs laid out a practical, eight-point plan for aiding the world’s neediest. Vaghar’s first response was to help raise $5,000 to buy anti-malaria bed nets for African villagers, a pet project of Sachs and his Millennium Project Alliance.

Vaghar did more, though. He visited with project staffers in New York, asking what else he could do. Short answer. Network among other student groups, they said. In 2007, Vaghar met with 20 student leaders at Harvard to discuss using tools like social media to link up and share experiences. MCN, co-founded with fellow student Seth Werfel, was born. Four years later, Sachs, as well as global health expert Dr. Paul Farmer, are two of the organization’s big-name advisers.

Networking power Beyond its online networking capabilities, MCN provides member grants ranging from a few hundred dollars to several thousand. To date, it has raised more than $250,000 for projects and support services while sponsoring an annual conference, this year being the third.

Two years ago, Vaghar called up Robert Maginn, chief executive of Jenzabar Inc., whose company provides software to US colleges and universities. Maginn also heads the Jenzabar Foundation, which supports humanitarian causes to the tune of more than $1 million annually.

“It was the luckiest cold-call of his life,’’ says Maginn with a laugh. “Sam was preaching to the choir anyway, because we’d already been working on Millennium goals.’’ (The Millennium Project was started by the United Nations in 2002 to combat poverty around the world, as well as improve education, the place of women in society, and the environment.) What impressed Maginn most was that Vaghar and MCN weren’t creating chapters or franchises but drawing together existing student groups. “Sam was using tools like social media to network people already engaged in the battle,’’ he says.

One group receiving aid from MCN is Tufts University’s Engineers Without Borders, currently working on water projects in Uganda and El Salvador. Tufts junior David Meyers, 20, a former EWB vice president, says MCN has helped groups like his see what works and what doesn’t. “Most of our projects are small in scale,’’ says Meyers, “so it’s sometimes hard to believe they’re important. It’s encouraging to realize you’re part of a much bigger effort.’’

MCN managing director Jacob Geller, a Boston University grad who worked with Vaghar while at BU, calls him a “great communicator’’ with a gift for getting young people to think long-term and big-picture. As Vaghar’s role expands, adds Geller, one challenge will be staying connected to grass-roots campus groups and not just “grasstops’’ - movers and shakers at the top of national and international organizations like USAID.

Where does Vaghar plan on MCN being five years from now?

“We’re going through a lot of self-analysis right now,’’ he said. “Talking about expanding to new cities, finding a model that works.’’ Leadership cultivation is another top priority, he added, so these organizations don’t fall apart once students graduate and move on.

“We’re on the ground, we get what students’ needs are,’’ he said. “It’s not that complicated.’’