Saving for their young age

Smartphone apps make it easy to deposit money in the moment, and websites are appealing to young people to use their tools 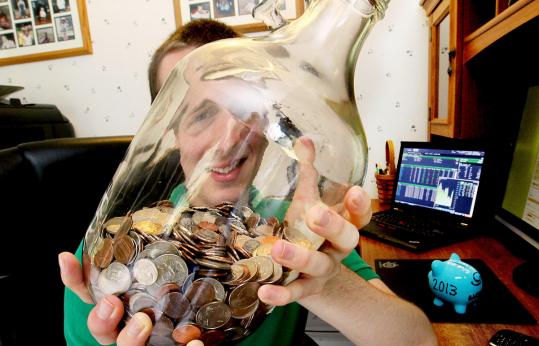 Tyler Murphy, 20, a student at Babson College in Wellesley, and an obsessive saver, holds his family’s cider bottle for saving coins, at home in Gilford, N.H. (CHERYL SENTER FOR THE BOSTON GLOBE)
By Linda Matchan Globe Staff / July 12, 2011

First thing every morning, Tyler Murphy checks his e-mail, Facebook page, and Twitter feed. Then he gets serious.

He goes to www.mint.com, a website that tracks the money he is spending and helps him find ways to save. He does a product search to run price comparisons on products he’s thinking of buying. He checks www.ebates.com, which gives cash back for online purchases. He uses the foursquare application on his smartphone to see if restaurants nearby are offering deals.

In many ways Murphy is like any price-conscious, technology-enabled adult looking for creative ways to save a few bucks elsewhere than daily deal sites like Groupon. Except for one thing: He’s only 20.

“It’s all about that saving instinct,’’ said Murphy, a student at Babson College who describes his twin passions as saving and social networking.

Saving money is an instinct not usually associated with Murphy’s generation, which is better known for spending freely, moving fast, and wanting things now. But some new websites and apps are trying to make saving seem cool. Those behind such apps claim they are working, though it’s unclear whether any savings is going toward life’s big moments - a first house, retirement - or for iPhones and Xbox 360 Kinect games.

Michael Ferrari, of www. smartypig, a social banking website aimed in part at 25-to-35-year-olds, said the average savings goal is $5,000 and about 70 percent of customers reach the goal. SmartyPig’s intent is to help people save for specific goals, from a home remodeling project to a flat-screen TV, and it recently launched a mobile application for smartphones that automatically posts updates on Facebook and Twitter every time users put money aside for their goals.

Another personal finance website, www.bankrate.com, conducted a “financial security index poll’’ last month asking people how they feel about the amount of money they have in savings relative to a year ago. Those under 30 reported being more comfortable than people in other age brackets.

“The response seems to indicate that to some extent they are having some success in squirreling away at least a little of something,’’ said bankrate senior analyst Greg McBride.

These newest social media money management tools show users how to save money (and in a tough economy) by letting them to do it their own way - while multitasking, getting instant feedback, and sharing with their friends what they have done.

Of course, plenty of people still save money the old, app-less way. George Simpson, 58, of Stow is a saver by nature and uses “traditional mechanisms’’ for saving money, including monthly direct deposits into his investment accounts, and hoarding one- and five-dollar bills, which he stuffs into a sock drawer.

“It’s fun and can be painless,’’ Simpson said.

It’s also foreign to a lot of younger people. “A bank’s website is not the most exciting thing in the world, and some people want something more engaging,’’ said Ferrari of SmartyPig. “We often throw out quick suggestions.’’

One recent weekend, he posted on SmartyPig’s Facebook page encouraging customers to add money to their savings goal whenever they passed a . “If you can ditch your $4 coffee habit every day for 3 years, at an annual interest rate of 6 percent, you’d save $4,926.94, calculates the Latte Factor Calculator,’’ SmartyPig’s message said.

“We said, ‘Rather than buy that latte, pull out your phone, log into your SmartyPig mobile app, and put that money to a goal,’ ’’ Ferrari said. “Just click and add money.’’

SmartyPig appealed to Louis Cameron, 28, of Quincy, who likes to keep abreast of new apps and websites, finds it impossible to save money on his own, and was getting spooked by how quickly he was parting with his money.

“I just slap down my debit card and there goes money from my bank account,’’ said Cameron, who works for a health insurance company. He’s saved more than $1,100 with SmartyPig since October. His goals are a road bike, camera, and engagement ring for his girlfriend.

“I think it’s very cool to save,’’ said Cameron, who a few hours earlier had tweeted that he had exceeded one of his savings goals. “If you can save in this day and age, you are cooler than me before I started saving with SmartyPig, because I could not save to save my life.’’

There is more than gimmicky smartphone apps behind this saving impulse. According to a 2010 Gallup poll, the recession and financial crisis have significantly affected how many Americans feel about spending, including younger people. The poll found that spending less is the new normal for many Americans; 62 percent said they enjoyed saving more than spending, compared with the first half of the decade, when Americans were about evenly split. Among 18-to-29-year-olds, 56 percent reported they enjoyed saving more, compared with 43 percent who preferred spending.

“In my generation, it wasn’t necessarily instilled in you that saving was important,’’ said Melanie Haber, 22, who lives in the Back Bay and has saved $6,000 using SmartyPig. “When I was a sophomore at Mount Holyoke and saw so many women in the class of 2008 who weren’t finding jobs, there was a whole mass hysteria,’’ she said. Haber had one friend who was hired for a job that she was assured would wait for her after graduation but then was eliminated.

Haber decided then that it was a good idea to start saving, and picked SmartyPig because of its “pretty cool website’’ and Facebook and Twitter presence.

As for traditional banks, “not many young people have set foot in a corner branch lately,’’ according to Jeff Mirabello, spokesman for DIRECT. The direct bank is introducing a “Remote Deposit Capture’’ mobile tool this summer that lets users take a picture of a check with their smartphone, then transmit it directly into their ING account.

“I think the concept of a branch bank is eerie and outdated,’’ Mirabello said. “I just turned 29, and for younger people, as technology has gotten bigger, we’ve embraced it. You can order dinner on the phone, movie tickets on the phone. The concept is anything that can be done can be done online, so why shouldn’t banking be done online?’’

This includes setting aside money to be saved.

“Unless [saving] becomes vivid, unless it becomes real, unless it becomes immediate, it’s boring,’’ said Steve Weisman, who teaches financial planning at Bentley University. “It’s hard to look at what saving can do for us in the future when I’m thinking about that latte or that movie. But when I can have it relate to how I think, on my [phone] or on my computer, that’s when saving becomes cool.’’

Murphy, the Babson student, attributes his diligence toward saving to smart tools such as Mint.com. He was enticed by a lot of its features including the at-a-glance way of summing up his finances.

“It aggregates all your accounts - bank savings, credit cards, investments - into one site and displays all your account balances and gives you a net worth,’’ he said. “It’s kind of cool to be able to see how much you are worth, at a young age.’’ (In his case, $11,092.)

Murphy is so enamored that he helped start the Piglet Project at Babson to motivate students to save money for philanthropy using social media. The project’s mascot is named Phil Anthropig; it has a Facebook profile that says “Give Big to the Pig.’’

The inspiration was a piggy bank.

“I think people think it’s an archaic concept,’’ Murphy said. “But what we are doing to make it fresh and 21st century-ish is integrating the social aspect.’’