No rest for the wicket

The weird, wonderful -- and absolutely cutthroat -- world of competitive croquet. 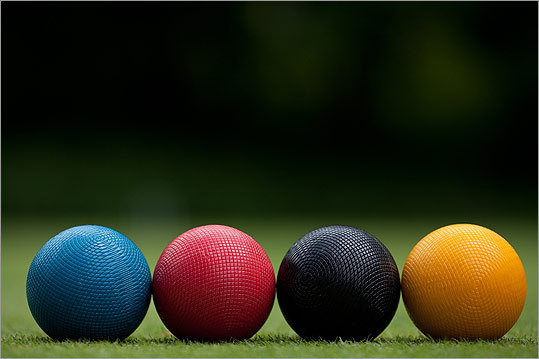 The Berkshire Invitational is widely considered one of the top croquet tournaments in the Northeast. It's been played every June for the past 16 years at the Lenox Croquet Club. (Photograph by Matthew Cavanaugh)
By Kevin Alexander July 10, 2011

With its sprawling layout, creaky pine floorboards, and dining room featuring five wrought-iron chandeliers and a somewhat terrifying oversize terra-cotta fireplace decorated with gargoyle heads, the Lenox Club seems less like a country club and more like the country mansion of an eccentric billionaire who, upon serving you dinner, will announce that at midnight someone in the room will be murdered. Instead, a man with a white beard stands up to give a toast. Dressed in a coat and tie with flushed cheeks that suggest cocktails have been served, he glances around at the 30 or so others sitting in the dining room and begins pointing out various members of the crowd. Finally his gaze falls upon a man with a salt-and-pepper goatee seated right in front. “Jim Turner,” the man says, “is one of our bicoastal players.” He pauses, either for effect or to rein in a wayward thought. “And he is just killing everyone.” It’s true. Turner, who lives in the San Francisco Bay area and spends summers on Martha’s Vineyard, is playing extremely well and will be the number one seed going into the final day. That may explain why another top player, David Ekstrom, shouts out, “Well, that’s why we need to break his thumbs!” And though the crowd roars with laughter, it’s kind of hard to tell – aside from a small, wry smile – whether Ekstrom is joking.

If you play competitive croquet and live in New England, chances are you mark your calendar for the Berkshire Invitational, then schedule the rest of your summer plans. Widely considered one of the top croquet tournaments in the Northeast (and usually drawing a stronger field than the Massachusetts State Championship), it’s been played every June for the past 16 years at the Lenox Croquet Club – essentially two manicured full-size croquet courts kitty-corner to a small pavilion, bordered by woods on two sides, and reachable only by an unpaved road that looks more like a trail. Above it sits the Lenox Club, a by-invitation-only social club of considerable Brahmin pedigree founded in 1864, which treats the Croquet Club as its mistress, loosely affiliating with it, occasionally even letting it use its facilities, but with no plans to make it official.

As one might imagine, given the need for exquisitely manicured lawns, sometimes pricey equipment, and hard-to-clean white shorts, the pool of people who can actually invest the time and money to become serious croquet players is fairly small and skews old. Across the country, the United States Croquet Association has nearly 3,000 members spread among 300 clubs. And aside from the current Bobby Fisher of croquet and number one player in the country, Ben Rothman – a highly touted 27-year-old from Mission Hills, California, who as far as anyone knows is one of only a few Americans able to make a living as a professional croquet player and teacher – most players tend to be older than 50 and either retired or wealthy or both.

Before the Berkshire Invitational, I’d never met any serious croquet players. My curiosity about the subject was pricked when, during a particularly intense bout of procrastination, I randomly fell down a rabbit hole of YouTube videos. In them, people were making crazy, complicated trick shots while playing a version of the game that looked nothing like the one I’d been decidedly bad at during my youth. Its self-seriousness and skill set became instantly intriguing. Who were these mallet mavens, I wondered, and, perhaps more important, how in the heck does one play croquet with only six wickets?

As it turns out, not that easily. When it comes to understanding sports, American Six Wicket Croquet is almost as complicated to pick up as that nebulous British bat game cricket. Croquet was invented in the British Isles in the mid-19th century, and the backyard version was the first to gain popularity in the United States when manufacturers in the late-19th century mass-produced a smaller, less expensive version of the game to be played on rough turf (though according to the US Croquet Association, it “suffered a setback in the 1890s when the Boston clergy spoke out against the drinking, gambling, and licentious behavior associated with it on the Common”). The more complex six-wicket version, however, didn’t gain popularity outside Britain until 1977, when Jack Osborn organized the United States Croquet Association and codified a set of rules for an American version of Britain’s “Association” game.

The singles six-wicket game essentially works like this: Each player plays two balls (either black and blue or red and yellow) and over the course of 75 minutes attempts to knock his or her balls through each of the six wickets in a clockwise direction, then counterclockwise, hitting a stake at the very end. Players get one shot per turn but can earn additional strokes by hitting the ball through the wicket (one bonus stroke) or hitting their ball into another player’s ball (two bonus strokes), which is called “roqueting.” After roqueting, a player places her ball so that it’s touching the one she knocked, then strikes her ball so that it sends the opponent’s into the woods – widely recognized in the backyard version of croquet as the favored move of jerk uncles everywhere – or to some other horrible fate.

The ball that did the roqueting has to go through a wicket before it can roquet the same ball again – in croquet parlance, it’s called being “dead on that ball.” As in zombie films, “deadness” plays a huge part in serious croquet. A deadness board, ostensibly keeping track of which balls have passed away, is kept on the sidelines, and much of the talk during the match involves people exclaiming things like, “He’s dead on blue.”

On a beautiful June morning, six hours before he suggests Jim Turner might be better off with broken digits, David Ekstrom is playing in a championship flight match. The tournament participants are divided into three flights, each according to handicap: championship, first flight, and second flight. To qualify for the championship singles, players need a four handicap or lower. Ekstrom, a tall, 73-year-old retired banker and insurance executive from Pittsfield with a squinty visage that kind of makes him look like a more substantial, less bald James Carville, is one of the favorites to win and has a zero handicap. His opponent is Perry Mattson, a Mainer whose relatively high handicap (a four at the time of the tournament) is balanced out by the fact that he’s the defending Berkshire champion, swings a fancy metal mallet from Australia, and possesses one of those rare Kennedy-esque New England accents.

The match begins conservatively, with both players mostly knocking their own balls out of bounds to protect them. Watching these top players go at it, the game seems a hybrid of chess strategy and pool-shot execution. The four balls are scattered throughout the court in ways that probably won’t make sense to the lay viewer until several shots after the fact. Being surrounded by people who’ve played for years, one gets a hint of what it would be like to be on a Wheel of Fortune showcase where everyone else has been able to solve the puzzle for several turns while you’re still buying vowels. Finally, a missed shot by Mattson opens the door for Ekstrom, but he gets the ball “stuck in the jaws” of the wicket, so he’ll need another shot to get through, an incredibly unlucky turn of events for Ekstrom. With the game fully in Mattson’s control, Ekstrom’s wife, Martie, also an accomplished player, gets up and walks back to the pavilion. “I don’t know what’s going on,” she says, shaking her head. “He usually hits all those shots. He’s really going to have to pick it up tomorrow.”

But, alas, there would be no tomorrow. Saturday morning, Mother Nature provided no clemency. Dark clouds hung overhead, and heavy, driving rain poured down. When I arrived at the club around 9 a.m., pools had already started to form on the lawns. The tournament director could do little but call the tourney and declare those with the most wins the champions, giving Jim Turner his first Berkshire Invitational championship, thumbs intact. “I wish we didn’t get rained out,” Turner said when I asked him about it a few weeks later while he played a tournament in Greenwich, Connecticut. “I’d have liked to have given [the other players] another run at me, because I think they still think my winning is kind of a fluke.” He pauses, chuckling. “On the other hand, I did just win the tournament, so . . . maybe I’m not that upset.”

Kevin Alexander is a Wellesley native and a senior editor at http://www.Thrillist.com. For familial reasons, he uses the Irish grip when swinging a croquet mallet. Send comments to magazine@globe.com.

The best thing to do is to become a member of the United States Croquet Association ($65 for an individual, $100 for a couple per year). Mail in an application downloaded from the group’s website: http://www.croquetamerica.com/usca/join. With proper notice, USCA members can gain access to clubs all over Massachusetts, including ones in Marion, Edgartown, Lenox, and Nantucket.

If you’d like to join a local club, Boston Croquet plays out of Milton and meets regularly during the summer. Dues for the season are $125 and include membership in the USCA. For more information, visit the club’s rather rudimentary website: http://www.sites.google.com/site/bostoncroquet/home.

If you prefer to do it on your own, you’ll need a large, flat, preferably well-manicured lawn (official lawns measure 105 feet by 84 feet, though as long as you keep it proportional, you can always shrink it down to half size, 52˝ feet by 42 feet). You’ll also need equipment – quality full-size sets can be had for $200, and should include four balls, four mallets, wicket clips, six or nine wickets, and two stakes. The USCA website also provides an extensive list of equipment manufacturers and service providers to help you get everything from professional-grade mallets and umpire boards to synthetic turf.