Hilarious at 140 characters or less

Barely out of college but well into comedy, Megan Amram gained a foothold on Twitter and is now paid to write jokes 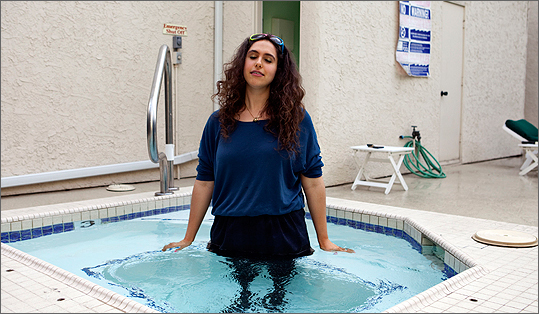 Comedian and writer Megan Amram, a graduate of Harvard, goofing around at home in Los Angeles. (Eric Grigorian for The Boston Globe)
By Joseph P. Kahn Globe Staff / June 28, 2011

Earlier this month, Megan Amram returned to her Portland, Ore., high school to deliver the commencement address. Her speech was titled, “I am very, very old.’’ Amram is 23. She graduated from Harvard College last year, having majored in psychology, then moved to Los Angeles to become a comedy writer. And she has already succeeded.

Was Amram pulling somebody’s leg with the Depends jokes? Yes, class, she was. Legs, and other body parts.

The graduates certainly got an earful about Amram’s own high school years, with their crushing disappointments (no “Twilight,’’ no iPad) and enduring friendships (she and her BFF are so close, Amram said, she’d “give me her kidney, were I to roofie her and steal her kidney’’). Some helpful advice was dispensed too, such as, prepare for a life without community service requirements, “unless you violate parole.’’ And avoid contracting STBs — sexually-transmitted babies.

All in all, it was a boffo speech. “I love performing,’’ says Amram. “Not because I think I’m any good at it, but because I love being in front of people and acting, like, stupid.’’

So who is Megan Amram, and why is she consistently ranked among the funniest women on Twitter?

Not only has Amram become a hot young Hollywood comedy writer, hired to write jokes for a new Disney Channel sitcom, “A.N.T. Farm,’’ and for this year’s Academy Awards show. She’s also taken her place among a new breed of comedic talent who use social media as a potent, maybe even defining, weapon in their arsenal.

Like Amram, these comics are branding themselves online, 140 characters at a time, the way an older generation used Conan O’Brien’s show, “The Simpsons,’’ frat-humor flicks, and comedy clubs to break into the big time. “On the Internet, nobody knows you’re a dog,’’ the cartoon says. But they do know if you’re funny. Amram sounds like the real deal. More importantly, she’s proving it doesn’t take eight years of improv and stand-up to break through in today’s comedy business.

“I first saw her stuff a year ago, when someone retweeted it,’’ says actor-comedian Rob Delaney, a Marblehead native who has become close friends with Amram since she settled in LA. “She wrote something like, ‘Why is it we “drive’’ on a “parkway’’ and “park’’ at a “strip club’’?’ Her material is uniformly amazing. She has fans in the highest places, and they’re totally warranted.’’

The Huffington Post named Amram one of 18 Funny Women You Should Be Following on Twitter, and Wired magazine places her in an elite tweeting group that includes Sarah Silverman and Steve Martin. The Comedy Bureau, an LA-based resource for professional comedians, sings her praises on its website: “As far as escalating the art of being funny on the still new canvas of Twitter, there are few people that have mastered it quite like Megan Amram.’’

Posting as many as three jokes a day (for Father’s Day, she tweeted: “What should I buy my dad today? He already has golf clubs and a secret family in Ohio.’’), Amram calls Twitter “the fast-forward button’’ on her career. “It’s naturally how I think anyway, in micro-jokes,’’ she says. “It’s a puzzle, a challenge to see if you can make a joke in one line.’’

Notwithstanding her rabid fan base (over 50,000 Twitter followers), Amram considers herself only semi-computer literate and opened her Twitter account just a year ago, when she dreamed of launching a career writing Broadway musicals. That remains a goal, but for now it’s the new media world, not the old, that’s driving her career and catching the eye of show business insiders.

Videos are another element in Amram’s arsenal. Two recent productions, one a “Glee’’ audition parody (around 125,000 YouTube views), the other a phone-sex spoof, have garnered heavy viewership and the kind of online press coverage aspiring comedians drool over. In the “Glee’’ video, she announces she will be singing “We Built This City on Rock ’n’ Roll.’’ For the next five-plus minutes, she proceeds to cover her face in lipstick while the Jefferson Starship tune plays in the background. Does Amram actually sing? Uh, no.

“I hate to knock Twitter because — and this is the Harvard nerd in me — it’s an amazing sociological phenomenon,’’ says Amram, who recently signed with the William Morris Agency, another signal she’s catching fire in the industry. She’s also finding and supporting other Twitter-fueled comedians in what “really does feel like a community, which is cool.’’

Twitter is a good fit for her brand of edgy, often self-mocking humor. “I’m going for nightmare comedy,’’ she says. “Online, I love this persona of being a little weirded out, bizarre, and kind of dark. I love violent jokes about people dying. The idea that people don’t always know when I’m joking is great. I get all these Internet messages going, ‘Oh my God, who are you?’ I love that.’’

Amram grew up in Portland, raised by her mother, an anesthesiologist. Her twin brother, Alex, is in medical school. Among her comedic influences were Woody Allen and the Marx Brothers . “I was the chubby, nerdy one,’’ she recalls. “My family always says I never made a joke until I was 17 — and that’s all I do now.’’

Amram still runs every tweet by her brother (“He was always the funny one, not me.’’) before posting it. At Harvard, she tried her hand at stand-up comedy, on campus and off. But her biggest coup was co-writing a pair of Hasty Pudding theatricals, “Commie Dearest’’ and “Acropolis Now.’’

Along with her writing partner, Alexandra Petri, now an editorial writer-blogger for The Washington Post, she formed the first all-women writers’ team in Pudding history.

“If the system is merit-based, then someone like Megan will rise to the top,’’ Petri says. “Add a medium like Twitter and she’ll do it with a celerity that’s terrifying.’’ Comedy is about getting the audience to take the biggest leap possible, Petri notes, and Amram has a gift for “compressing the biggest leap possible into the smallest amount of words.’’

Among the perks of Pudding writing was getting to pen jokes for the club’s Man and Woman of the Year Awards. James Franco and Anne Hathaway were recent roastees. They also happened to cohost this year’s Oscars telecast. After Amram was invited to join the telecast’s writing staff, Hathaway remembered her from the day in Harvard Square when the actress was cruelly mocked by grown men in high heels and lingerie. Small world.

What is it about Harvard, anyway, that produces so much comedic talent? “Harvard kids overanalyze everything,’’ says Amram. “The Pudding and Lampoon people, they’re deconstructing every joke. Which makes them a little funny to talk to, in a nerdy sort of way. But it also makes for really good writers.’’

When not blogging or tweeting, Amram commutes to her office, where she collaborates on scripts for “A.N.T Farm,’’ a sitcom aimed squarely at tweens. It’s a show that hardly lends itself to the twisted humor in which Amram usually traffics. Fear not, though, Twitter fans. Going all Miley Cyrus on you is not in her makeup.

“I’m always juggling these two strands of comedy in my head,’’ says Amram with a laugh. “Which I guess means my brain is very supple, if properly stressed.’’