Added to her network: UN 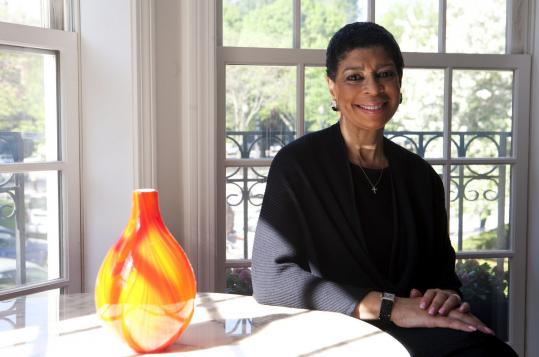 Carol Fulp (pictured at her Commonwealth Avenue home) was appointed as a public delegate representing the United States at the United Nations. (KAYANA SZYMCZAK FOR THE BOSTON GLOBE)
By Linda Matchan Globe Staff / June 7, 2011

Boston businesswoman Carol Fulp was vacationing in the Virgin Islands last summer when she got a phone call from the White House. President Obama was eyeing her for an administration post.

She was pleased but not surprised. Fulp, who had been a member of Obama’s national finance committee before the election, had signaled she would love to be on the board of Washington’s Kennedy Center.

It turned out the president had something else in mind. He was nominating Fulp to be the US representative to the 65th session of the General Assembly of the United Nations.

The first thing she did was call her husband. The second thing was “United Nations.’’

“I don’t remember if I’d ever been at the UN before, truth be told,’’ said Fulp, 59, a senior executive of John Hancock Financial.

It’s a bit of a leap to go from overseeing community outreach at a Boston financial institution to delivering speeches at the United Nations. But those who know Fulp say it’s not that much of a reach: She is one of the most visible African-American women in corporate Boston, where it has historically been tough for women and minorities to rise to positions of influence.

“She is so in her zone,’’ said her friend Bennie Wiley, principal of the Wiley Group.

Fulp’s zone cuts through much of the city. She leads John Hancock’s social responsibility initiatives, focusing on disadvantaged youth. She is also a politically savvy player in Boston’s business communities with a strong interest in public service. When her day job finishes, her other work begins. She is a board member of many prominent institutions, from the John F. Kennedy Library Foundation to the Massachusetts Convention Center Authority. She is known for being an inveterate networker ever on the alert for ways of bringing communities and corporations together.

“Without sounding corny,’’ she said, “I like to think of myself as a bridge.’’

Fulp said she sees her responsibilities at the United Nations as an extension of what she does at home, except now her stage is the whole globe.

Her role is a one-year appointment as a public delegate representing the United States — a job description with no fixed criteria and which revolves largely around diplomacy and protocol.

Much of the formal work takes place between September and December in New York during the session of the General Assembly, which comprises all 192 members and is the UN’s main policymaking body.

One of her duties takes place during formal debates, when heads of state address the assembly. Fulp sat in the US chair in September when representatives from Liberia, Colombia, Nigeria, Slovakia, and Djibuti spoke, when more senior officials were not available. The chair is rarely empty, most often occupied by the ambassador or a deputy ambassador.

A few times she sat behind the “United States’’ placard and read prepared statements, once expressing the United States’ “delight’’ at the creation of UN Women, a new agency on women’s empowerment. Another time she stood at the podium and expressed the US commitment to promoting the use of sports to advance peace and development.

Her role also extends to less formal obligations: From time to time she has stood in for US Ambassador Susan Rice, a member of Obama’s cabinet who serves on his National Security Council. Once Fulp delivered a speech at a church near the UN commemorating the birthday of civil rights activist Rosa Parks.

“It was fascinating, educational, interesting, inspirational,’’ said Fulp, who took a leave of absence from John Hancock last fall and moved from her Commonwealth Avenue condo in the Back Bay to New York, where she had an office in the US Mission to the United Nations.

When the General Assembly session’s main work wrapped up in December, Fulp’s formal duties did, too, though for the rest of the year she is considered an honorary ambassador to the UN, charged with addressing community groups about its work. Ever the networker, she’s still looking for ways to bring her particular interests to an international stage.

Since John Hancock is a sponsor of the Boston Marathon, she went back to New York last month to address a UN Sport for Development and Peace forum. She told member states — including Monaco, Belgium, and Tunisia — how they could use marathons to raise money for their communities.

Fulp is a tall, engaging, outgoing woman with short hair, an affinity for St. John business suits, and a laugh so hearty that she doubles over on her lap, like a rag doll. She was born in Queens, N.Y., to a family with deep roots in the Virgin Islands, including the matriarch Gertrude Melchior, a community leader and major landholder.

Fulp’s father was a postman who died at 36. Her mother then married his brother, who died four years later from a rare disease.

Fulp credits much of her resourcefulness to her mother, who supported her and her younger brother, Paris, working as a manager at Swissair — the first African-American woman in management, Fulp said. While her friends were going to summer camp in upstate New York, Fulp attended an international camp in Switzerland, air travel courtesy of Swissair.

This being the early 1960s, it also gave her a new perspective on being African-American.

“I came from a different world,’’ Fulp said. “I came from a place where we marched. I remember, as a child, we didn’t get Christmas gifts one year because the NAACP was boycotting, trying to indicate the purchasing power of Negroes. There was an initiative not to buy at Christmas. They were trying to open up the South and that’s what people in the North were doing. No one in our house got Christmas gifts. And we were proud to be in a position to make a statement.’’

But in Switzerland she met wealthy girls from around the world who had never seen an African-American before. “They thought I was Spanish,’’ she said. As for the privileged American campers, “if they knew African-Americans, it might have been their housekeepers,’’ she said. “It was isolating. Being there helped to ground me and keep my own counsel.’’

Fulp attended college at the University of the State of New York and moved to Boston in 1976 to work at the Gillette Co. in the customer service department. At one point, the company asked her to go on a recruiting trip to black colleges in the South.

“I was really bitten by human resources, and the opportunity to bring in talent and help shape and groom them,’’ she said. It was the start of a lifelong passion for mentoring younger people.

Fulp would become employee relations manager for Gillette and later became director of human resources for WCVB-TV. But it was at Gillette that she met and married Bruce Bolling, who went on to become president of the Boston City Council, and a mayoral candidate.

“I was very attracted to the civic engagement and the political engagement,’’ said Fulp, who was smitten by his license plate, which read ‘‘VOTE.’’ They divorced after 12 years.

She is married now to banker and businessman Bernard Fulp. But she has not lost her passion for politics or for community engagement.

“When Aunt Gertrude died, my cousins said: ‘If we each take a piece of her, we are doing our part to continue her legacy.’ We’re all trying to continue Aunt Gertrude’s spirit in different spheres.’’

In many different spheres, in Fulp’s case. She has led a group of prominent Boston women to New Orleans to build a house for homeless musicians; accompanied Angela Menino, the mayor’s wife, to Rwanda to help open a girl’s school; and found ways for John Hancock to use its Boston Marathon sponsorship to reach out to the community. She hatched a plan, for example, to introduce elite Kenyan marathoners to Boston schoolchildren so they can learn about African culture.

“She has an intuitive sense that seems to guide her actions,’’ said Wayne Budd, a former associate attorney general of the United States who later became an executive vice president and general counsel at John Hancock. “She’s community driven, always looking out for the well-being of others.’’

Apparently this extends all the way to the UN, according to Mark Kornblau, communications director for the US Mission to the United Nations, who watched Fulp in action in December at a forum for young people organized by Ambassador Rice.

“There had been a great deal of planning done and it was all set to go, with live TV coverage and a webcast from the Security Council chamber,’’ he said. “But five minutes before the session, a pipe burst and the Security Council had to be evacuated. There was a period of about 90 minutes when everyone — up to the ambassador — was scrambling to salvage the event. Meanwhile, all these kids from New York City, Philadelphia, and Boston had come in and we had to keep them safe, and occupied.

“A coworker called me and said, ‘Don’t worry about the kids. They’re all on the second floor of the US Mission, and Carol Fulp is giving them leadership training,’ ’’ Kornblau said. “That type of thing comes naturally to her. She is a very gregarious, outgoing, and enthusiastic person. No one had to tell her how to fill the time. She had a few ideas of her own.’’

EDUCATION: University of the State of New York.