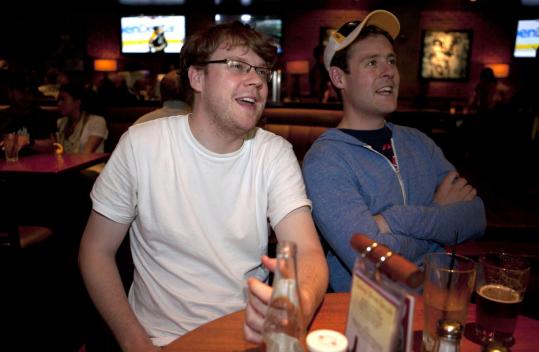 From his barstool perch at Jerry Remy’s Sports Bar & Grill in the Fenway, Dave Hassman was watching Game 3 of the Bruins-Flyers series on 12 enormous screens and rooting for Boston. But not because he cares about the home team or hates the Flyers. “When the Bruins score, I’m not like ‘Yes!’ ’’ he said, pumping a fist and mimicking the euphoria of a true fan.

Who cheers for a team that usually doesn’t matter that much to him?

A lot of people, it turns out. As the Bruins head to the Eastern Conference Finals of the Stanley Cup playoffs, the Globe searched out fans who have just jumped onto the Bruins bandwagon and found that, for many, the team itself is almost an afterthought. (Zdeno Chara — who’s he?)

Sure, some insta-fans are passionate, but only for a few weeks, and once the postseason is over, that enthusiasm, along with any knowledge gained, will most likely disappear as quickly as it came on. They love the Bruins right now, but mainly so they can chat with the boss, or because they want to be part of something larger than themselves, and with the royal wedding over, why not follow the Bruins?

Let’s take Hassman, 28. For him, postseason play is not an opportunity to end the suffering — 39 years and counting — since the Bruins last won the Stanley Cup. Rather, it’s a chance to meet women.

“Boston is a better city when a Boston team gets further in the playoffs,’’ Hassman, the owner of Boston Property Services, explained last Wednesday night, happily turning away from the exciting on-screen action.

“People who don’t usually go out during the week go out at night [during playoffs],’’ he said. “I look at the blond girl behind me and think, she’s probably looking to talk to some people.’’

The bandwagon fan is distinct from the fair-weather fan, who supports the team during the regular season — as long as it’s winning— and the disillusioned fan, who once cared so deeply that he can no longer bring himself to follow the team. The bandwagon fan, temporarily devoted as he or she may be, has no idea what came before. What? We suffered a catastrophic loss last year to the Flyers in the Eastern Conference Semifinals when we blew a three-games-to none lead? Who knew?

To be sure, Boston is a hotbed of die-hard Bruins fans. The team officially sold out every regular-season game at the TD Garden this season, and attendance — 702,600 in 41 games — was the highest average season attendance in Bruins history, according to the team.

When it comes to the regular-season at-home audience, however, the Bruins lag. (This is true for hockey elsewhere in the United States as well.) The percentage of households tuned into Bruins regular-season games this year in the Boston market was 3.1, according to the Nielsen Company. The , by comparison, averaged a 34.86 household rating in the Boston area last season, and the have generally been in the 8.0 range this year, according to Nielsen.

But now, suddenly, for a few weeks, hockey is everything to the just-hatched fans. A stunning 17.7 percent of households in the Boston area tuned into Game 7 of the first round of the playoffs against the , according to Nielsen.

“If they win, it will be fun, because he’ll be in such a good mood,’’ said Courtney Whitaker, 19, a student at Wentworth Institute of Technology, gesturing to her hockey-playing boyfriend as they watched the game at Jerry Remy’s.

“I’m trying [to learn],’’ Whitaker said, somewhat unconvincingly. “When you’re dating a hockey player, you want to impress them with your knowledge.’’

Alas, sometimes that “knowledge’’ is limited to the name of a single player or even a former player, while terms like “icing’’ and “blue line’’ remain a mystery. Perhaps that’s why the fan-come-lately is reviled. (Not that they care.)

Or maybe it’s because their devotion is a little . . . superficial. Even they concede they’re not rooting for the Bruins so much as for a Boston team. Any any Boston team.

Talk like that gets to Patrick Garvey, 24, a substitute teacher from Somerville.

“They’re lame,’’ he said of bandwagon fans as he cheered on the team. In his mind, fandom is a zero-sum game. Another person’s shallow support takes away from his hard work. “It can be excruciating to watch all year long,’’ he said, referring to hockey’s 82 regular-season games. “I put in more time and effort.’’

But in an age of multitasking and endless entertainment opportunities, jumping in to a particular sport just for the good parts may be a sign of sensible time management.

“There is only so much time for me to watch sports,’’ said Brian Batting, a financial adviser. He has Patriots season tickets, goes to Red Sox games, and loves college basketball’s March Madness. “I don’t have time to invest in hockey until April.’’

What’s hockey’s problem? Where to start?

Of the big league sports, hockey can be the hardest to fall for, said Frank Shorr, director of the Sports Institute at Boston University. The challenges start with the helmets, which make it difficult to see the players’ faces and get to know them. And because hockey often requires an early-morning commitment from parents, at a chilly rink, many people don’t play as children, and as a result may not connect with the sport later on. Without crossover stars like Tom Brady or Shaq, the Bruins have a tougher time attracting people who might turn into fans. Furthermore, Boston, with its population of students and transplants, has a fair number of people who’ve never thought much about hockey before moving to New England. Or thought much about hockey after moving to New England, for that matter.

Then there’s the Catch-22. Unless you’re already a fan, it’s unlikely you’ll go to a game, but unless you go to a game, it’s hard to become a fan. Hockey, more than other sports, needs to be experienced live to be truly enjoyed, at least in the beginning. Even high-definition television doesn’t capture the game’s physicality, said Shorr. “You have 12 people on the ice who are looking to kill each other . . . and on TV it doesn’t translate the way it does in person.’’

There’s also the issue of the speed and size of the puck. Take your eye off the action, to send a text or order another beer, and you’re lost.

But as the Bruins head toward the Stanley Cup, caring is becoming more important. “Going into work tomorrow, everyone will be talking about the game,’’ said Jenna Porter, 27, of Boston, a financial planner and analyst, as she hung out with friends at Jerry Remy’s. “I at least want to know who scored, so you feel you are an actual Bostonian.’’

Such is the pressure to be a fan that Porter’s two friends, both men, refused to give their names to a reporter after revealing the depths of their uninterest in the Bruins before the playoffs.

“If someone had told me five months ago I’d be watching the playoffs, I’d say you were insane,’’ said one bandwagon jumper, a lawyer. “Don’t use my name. It will hurt me.’’

Chad Finn of the Globe staff contributed. Beth Teitell can be reached at bteitell@globe.com.