What’s your favorite thing about working with sharks and rays?

I’d say feeding time – it’s a spectacle. All the rays just pile up. It’s like a living tornado.

If you pet them from head to tail, they’re smooth, quite silky. But if you go the other way, they’re rough, like sandpaper.

What makes them good candidates for a touch tank?

The cownose rays are curious. They actually will come over and interact. The bonnethead [sharks] probably will never allow anybody to touch them, but people don’t often get to see a hammerhead shark. And they’re a [type of] hammerhead.

Are there any misconceptions about these fish?

Some rays have gotten a bad reputation after the Steve Irwin incident. Rays are not dangerous. The only time they’re using that barb is for defense. I think [sharks] are more curious. When something bad happens like an attack, I think it’s usually a case of mistaken identity. They’re not interested in eating us.

Did the aquarium pick them because of that perception?

That’s part of the appeal. People say, “Oh, this is an exotic, dangerous animal.” It’s exciting to get to interact with that.

Do you consider your job dangerous?

I can’t think of a time that I’ve been scared for my life.

Have you ever been bitten?

For sure, but not by any sharks or rays. Diving in the Giant Ocean Tank, we’ll hand-feed the southern stingrays. Sometimes, another animal will see you’ve got a piece of shrimp and just nail your hand – but it’s never that bad.

So you’ve never been hurt?

I have some scars. I was holding onto a sea turtle, and they’ve got a little claw at the front of their flippers, and that got hooked into my wrist.

Do you have any favorite species?

I like the cownose because they’re personable. Sponges are not particularly cuddly, but that’s what I’m interested in.

In light of your work, do you still eat seafood?

Typically, I don’t go out to eat seafood. I prefer to prepare it myself. I do a pretty nice stuffed striper. 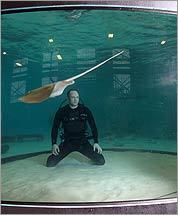