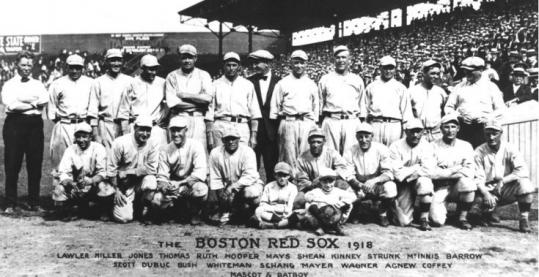 The Red Sox in 1918, in an era when the team colors — despite the club’s name — switched from navy to red almost yearly. (AP/Courtesy National Baseball Hall of Fame Library)
By Christopher Muther Globe Staff / April 7, 2011

uniforms have shifted over the years from itchy, heavy wool in the 1920s to 1970s polyester to today’s high-tech blended wonder fabrics, but — unlike other franchises — the style of the team’s uniform has remained remarkably consistent.

“They love tradition,’’ says Tom Shieber, senior curator at the Baseball Hall of Fame in Cooperstown, N.Y. “The uniform has been pretty similar since the 1930s. Honestly, I don’t think the team or Red Sox fans would be appreciative of a change.’’

Which is not to say that the Red Sox haven’t experienced their share of fashion flubs — let’s face it, the 1970s were not kind to anyone — but a look at the evolution of the team’s style does not uncover the same kind of sartorial embarrassments that plagued teams like the or the . Hey, even at it’s polyester nadir, it’s still a Red Sox uniform.

The 1900s: Stockings of a different color. The team got its start as the Americans, later adopting the name the Red Sox. Like all teams at the time, the Red Sox wore knickers with team-issued stockings.

“I think it’s funny that the Red Sox started off with uniforms that were not red, and the socks weren’t red,’’ says Shieber. The colors of the original uniforms were cream with dark blue socks, but occasionally red would enter the picture. Essentially the colors were all over the place until 1928, flipping from navy to red and back again on almost a yearly basis.

The 1920s and 1930s: The itchy years. The uniforms that players wore during this time were made of wool. “I compare these jerseys to the uniforms worn by soldiers in WWI,’’ says Richard Johnson, curator of the New England Sports Museum. “When a team would go on the road, they wouldn’t wash a wool uniform for a week or two, so they had to hold up under these conditions.’’

“I think they would have been pretty itchy and distracting to focus on the game, especially on hot days,’’ Johnson continues. “I’ve heard stories of players putting cabbage leaves under their hats to cool off.’’

During this time, wealthier teams could afford different weights of wool for spring, summer, and fall play. But Johnson says the Red Sox were unable to afford this luxury. Also, instead of jackets, players wore thick knit cardigan sweaters in the dugouts up until the 1920s. “They were really beautiful and very cool,’’ says Paul Lukas, ESPN.com uniform columnist and publisher of the website Uni Watch.

Teams didn’t start wearing numbers on their jerseys until the 1920s, and even then, numbers were assigned by where a player hit in the lineup.

The 1940s and 1950s: The Ted Williams years. A perfectionist, Williams was notorious for tailoring his uniform to enhance his batting.

“Think of [Vladimir] Horowitz getting his piano tuned,’’ says Johnson. “Ted was this way about everything. For his summer uniform, jerseys had to be a certain way. Sometimes he would even alter them himself. He would streamline the sleeve, so it would be more tapered and make it easier for him to hit. You can tell which jerseys he wore during the summer, because often the trim would be removed, and he would have cut the jersey to his specifications.’’

Also during this time, the wool uniforms became more forgiving for play on hot days as wool was blended with cotton.

The 1960s: The ideal uniform? Lukas has a soft spot for major league uniforms during the 1960s.

“I think the 1960s were great in part because we’re looking back on it through the lens of Kodachrome film. All you see are these brilliantly saturated colors. The nylon blend of the flannel uniforms draped really well. There was a happy marriage of ideal pant length and stirrup. Color TV was just starting, so you had an infusion of color, but you didn’t have the full-on stupidity of color that the 1970s brought.’’

The 1970s: Hello ugly. The Red Sox seldom strayed into bad style trends, except for the 1970s. The team ditched its button-front jerseys and belted pants for polyester pullovers and elasticized Sansabelt trousers. It’s still a switch that sends shivers down the spines of uniform watchers. If you would like to blame a team for this transgression, look to the , who wore the first all-synthetic stretch uniform in 1970. By 1973, every team had switched to polyester.

“In 1974, the Red Sox were wearing a polyester pullover, which looked like a company softball jersey. It was like their own version of the leisure suit,’’ says Johnson.

1980s and beyond: A play on tradition. By the 1980s, the Red Sox were back to button-front jerseys and belted pants. Over the years, tight polyester uniforms gave way to looser fits, which both looked back at the baggier uniforms of the 1930 and 1940s and reflected hip-hop-influenced styles of the ’80s and ’90s. In the 2000s, the arrival of Manny Ramirez and other players from the Dominican Republic also pushed the trend of players dumping tighter polyester uniforms in favor of baggier styles, with pants reaching the shoe, making socks nearly invisible.

“Every season there’s a couple of games where a guy trips over his baggy pants,’’ he says. “You wonder why the style persists. Those spikes can catch easily, and the result isn’t pretty.’’