THIS STORY HAS BEEN FORMATTED FOR EASY PRINTING
GETTING THERE

Lead off the game with a walk 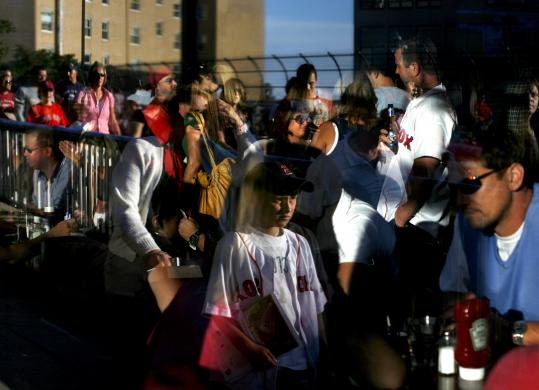 Red Sox fans file past a restaurant window on their way to the ballpark. (Travis Dove for The Boston Globe/File)
By Mark Feeney Globe Staff / April 7, 2011

In all the excitement about going to Opening Day, people forget about the importance of getting to it — or, rather, of getting there the right way.

The beauty of the lyric little bandbox isn’t just the green color scheme or idiosyncrasy of the layout, with its odd angles and narrow foul territory and, of course, that left field wall. The beauty is also more than the associations and memories. Let’s face it, the associations and memories are not always happy ones. No, so much of the beauty of Fenway has to do with its situation.

There’s a reason Fenway Park has the name it does. Knit into the fabric of the city, it’s just what the name says: a park. It’s like the other Fenway or the Common or Public Garden that way. They’re all parks. It’s just that one of them has a significantly larger light bill and the grass gets cuts more often.

The best way to appreciate this knittedness — to enjoy it most fully — is to become one of its threads. To drive to Fenway isn’t just a hassle and expensive. It’s to set oneself apart from the city. It’s to take the luxury-box approach to what should always (spiritually, at least) be a bleacher experience.

The thing to do is to embrace the city, to travel with some of the many eager strangers with whom you share a destination and rooting interest. A sell-out crowd at Fenway approximates the size of a small city — and the name of the transit line that takes you there indicates its affinity with parks. Getting on the Green Line, you’re already joining with others. You’re sharing an experience.

There are several options for getting to the ballpark by T. Commuter rail brings people to Yawkey Station. Inbound Riverside trains stop at Fenway before Kenmore. But Kenmore, ideally, is the way to go. A novel has its prologue, an opera its overture, and going to Fenway has Kenmore.

Exiting the station presents you with such a strong sense of city life, with Commonwealth Avenue and Beacon Street coming together. All this purposeful commotion — all this action — is preparation for the action on the field to come.

The park’s still a 10-minute walk away — that’s five minutes if the sidewalks are empty, but they aren’t empty before a Sox game. Those 10 minutes provide orientation (hey, there’s the Citgo sign!), acclimation (jeez, I thought the trolley was crowded), and a heightening of anticipation.

Taking that left up Brookline Avenue, you turn your back on the Citgo sign. In recompense, you glimpse an even more thrilling sight. Just before the sidewalk starts to rise as it goes over the Pike (look at all those speeding cars, oblivious to the ballpark!), there they are, the light towers. They’re like spindly petals, opening up to the sky.

There are other ways to reach Fenway, other angles to approach it from. But nothing quite opens up the experience of going there the way the walk from Kenmore does. Going through the turnstiles and getting to your seat is almost anticlimactic.