The League, then and now

This is not your grandmother’s Junior League. How the century-old Boston chapter is looking to change with the times. 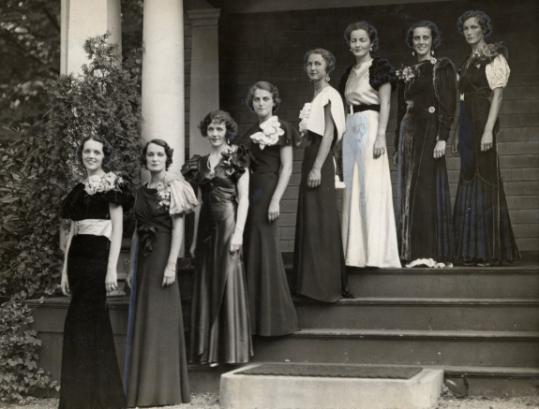 A mention of the Junior League is likely to conjure images of high-society women swathed in cashmere and chatting about, say, orchids. Over tea, of course.

But members of the volunteer organization, which formed here in 1906, claim its membership has changed dramatically over the years. Today, most of the Boston chapter’s 240 members work full time. Membership is open to anyone interested in volunteer work and, since 1986, no longer requires that a woman be sponsored by another Junior Leaguer.

Still, like other aging institutions, the League is looking to buff up its image and stay relevant in a changing Boston. In 2009, the local chapter joined an organizational rebranding effort, adopting the shorter, hipper “JL’’ logo followed by Boston. Meanwhile, work has begun on a $1 million effort to restore the League’s home at 117 Newbury St. (Its downstairs tenant is Kate Spade.)

If larger issues, such as what the future of the Boston chapter will look like and how it will grow, remain uncertain, members say the values of the organization are unchanged.

“The League has reflected a lot of changes in society. It’s more diverse,’’ Jean Marquand, 57, a past president and longtime member, says by telephone from the horse country of Aiken, S.C. “But core values remain rock solid. The mission is to develop the potential of women . . . The League is still the premier training organization for volunteer women in Boston.’’

The history of JL Boston extends back to the Civil War, when women’s sewing circles in Boston made clothing and bandages for Union soldiers. By the turn of the century, some of these sewing circles became more social in nature, with the city’s debutantes invited to join. After the Boston chapter began in 1906, members began to pursue community service in earnest.

The days of debutante sewing circles are, clearly, long gone. Now, 80 percent of local members work full time, says JL Boston president Beth Llewellyn, who is also the chief administrative officer of The Boston Foundation. Over the years, the chapter has changed to accommodate the needs of its members.

Before the late ’70s, many “women didn’t work, and meetings used to be held during the day,’’ Llewellyn says. These days, meetings, training sessions, and volunteer work are done largely in the evenings and on weekends.

Nevertheless, integrating League work with other parts of life can be tough. “Evenings and weekends are totally booked,’’ says Anne Morelli, 27, an MBA student at Boston University who volunteers in the organization’s communications council. “Finding the balance — how the League can fit into your life — is hard.’’

Particularly for women with young children. “We live mixed and harried lives,’’ says Paula Renzi Gibbs, 39, a mother of two who also holds a full-time job in a speech recognition company.

From the beginning, the mandate of JL Boston has been to improve the well-being of young women in the city, but recently the mission has crystallized into something more specific.

“Last year the focus was updated to the wellness and nutrition of girls,’’ says Llewellyn. “Wellness encompasses many aspects of a young girl’s life, both emotional and nutritional. It is not just food-related.’’

While the organization has never applied to a foundation for a grant to support its work, it is considering doing so now. One possibility, says Llewellyn, is the W.K. Kellogg Foundation, whose interest in nutrition and healthy food would be a good fit with the focus of her organization.

Meanwhile, JL Boston runs 11 community service programs for which members can choose to volunteer. They range from mentoring some of the 70 troubled adolescent girls at Germaine Lawrence, a residential treatment program in Arlington, to providing clothing and support to help disadvantaged women prepare for job interviews as they enter, or reenter, the workforce.

In the arts program, the League joins with the Boston Renaissance Charter Public School in Hyde Park and Excel Academy Charter School in East Boston to introduce fifth-grade girls to a variety of art forms two Saturday mornings a month. They may take a trip to the Museum of Fine Arts or learn about dance and how to cook healthy meals.

As the chapter refocuses its mission, it is also looking to refurbish its home. The Junior League’s Newbury Street building, purchased in 1958, needs major work, as decades of deferred maintenance come due. The interior is shabby, but the project will go far beyond cosmetics. JL Boston has contracted with Linea 5, a Boston-based architectural firm. Major work will be done on the building’s heating, air conditioning, electrical, and plumbing systems. A new kitchen will be built, an elevator installed, and the space made handicap accessible.

The fact that JL Boston is flexible is what appealed to Taylor Pam, a 42-year-old MBA, who owns her own small realty and management firm in Boston. She joined the Junior League last year and chose to read to people whose eyesight is impaired, who suffer from dyslexia or can’t read at all. She spends two hours a week most weeks reading in a booth at Recording for the Blind and Dyslexic, a Cambridge nonprofit. The company records her reading and releases DVDs.

“I chose this reading program because it would reach a lot more people,’’ she explains. “They distribute them to over 150,000 students from kindergarten to grad school. It’s not just a small population. My background is in business, so I read management in international business texts.

“I also joined the Junior League because it provided the opportunity to make new friends and meet other business women around my age without going all over the city for quality people,’’ adds Pam, who lives with her husband in the Fort Hill section of Roxbury and is pursuing a doctoral program in business administration.

You hear a lot of that around JL Boston. “I come from Virginia, and one of the main reasons I joined was to meet more women,’’ says Alexandra Jones, 37, a patent attorney who volunteers in the JL Boston arts program. “It’s really hard if you’re in your late 20s and 30s to meet other women if you work all day.’’