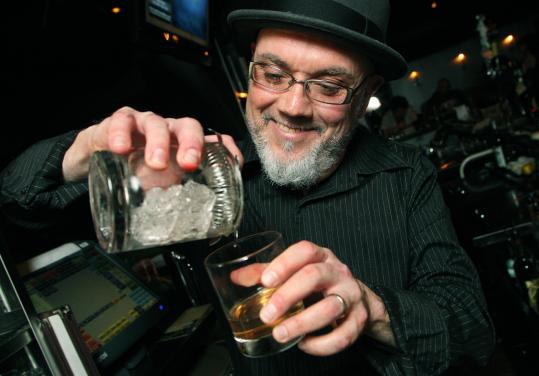 Brother Cleve was at the Think Tank in Cambridge last week to kick off a new weekly series called “Drink This.’’ (Bill Brett for The Boston Globe)
By Luke O’Neil Globe Correspondent / March 17, 2011

In bartending lore, the origins of some classic drinks can be murky. But when it comes to determining who sparked the resurgence of cocktail culture in Boston, the answer is simple: DJ, musician, and mixologist Brother Cleve. Cleve returned to the bar at Think Tank in Cambridge last week for the launch of a new weekly series called “Drink This.’’ Every Monday, he’ll pair classic and original cocktails from his vast library of recipes with themed musical choices.

“I’m calling it the art of ‘remixology,’ ’’ Cleve said. “The idea of having a drink that’s a classic, then a remix of it. The concept is how you pair music and cocktails.’’ Earlier this week he offered up riffs on classic daiquiris and played Cuban jazz. Upcoming nights will feature “Saturday Night Fever’’-era cocktails and, of course, disco.

“I’ll do the 1970s drinks,’’ he said, “but try to make them better, using higher quality, modern ingredients.’’

Cleve, who has toured the world as a musician in bands like the Del Fuegos and Combustible Edison, has been improving the quality of local quaffables for more than 20 years — ever since he had what he calls his cocktail epiphany in the mid-’80s. His efforts — at places like the Lizard Lounge, the Lava Lounge, and the B-Side Lounge in the 1990s — influenced a generation of the city’s most respected (and nationally lauded) barkeeps, such as Jackson Cannon of Eastern Standard and Island Creek Oyster Bar, and Misty Kalkofen of Drink.

Which makes his new gig at Think Tank all the more noteworthy. Cleve has been absent from the scene for quite some time. A yearslong bout with tuberculosis “put him out of commission,’’ he said, and the medication he was taking made it impossible for him to drink. Prior to that he had been traveling and recording with the band The Singhs in France, India, the UK, and the French West Indies. That work goes on.

“Right now we’ve finished a new album, but it won’t be released until late this year, so I’ve got some time to have fun and play around with a concept like this.’’

The city’s cocktail connoisseurs seem thrilled to have him back. So many people turned up to his first Monday night at Think Tank, located at 1A Kendall Square, that Cleve had trouble keeping up with the demand.

“I got a little overwhelmed last night,’’ he said. “Not to sound egotistical, but people did come there to have me make them a drink. You go to a Broadway show, and it’s like ‘Oh, the understudy? I want my money back.’ People had to wait for me to make their drink, but then again, they were like ‘It’s OK, that’s why I came here.’ ’’