Watch your streets — knitters are on the loose 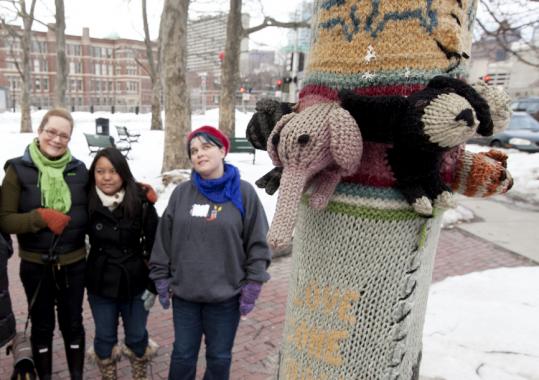 The South End Knitters’ weekly meetings at a Washington Street café seem innocuous, but don’t be fooled. Over knitting needles and yarn at the long table they’ve commandeered, they are contemplating something far more mischievous than a sweater. They’re graffiti knitters, and they’re plotting their next target.

The South End is their hood. They have wrapped colorful rectangles of knitting around lampposts, hung mittens from trees, snaked a knit flower vine around a bike rack, tagged a dog park fence with knitted bugs, and knit cozies for metal posts in a stretch of the Southwest Corridor Park. They do it for sheer whimsy of it.

These guerrilla knitters are part of a growing global movement of “yarn bombers.’’ They borrow the visual and verbal language of graffiti artists who leave their marks with spray paint — but practice the craft in a less destructive manner. After inclement weather, they have even been known to take pieces down and launder them.

Still, police consider yarn bombing illegal, saying it is technically defacing property and littering. So far, though, no one in Boston has been cited for it — and the yarn bombers don’t seem worried about protecting their identity.

As with graffiti, no two tags in the yarn-bomber subculture are alike. They range from sleeves on parking meters to tubes on tree limbs to sweaters on statues: A recent high-profile example is the neon pink sweater that the New York street knitter Olek crocheted in December for the 16-foot “Charging Bull’’ statue on Wall Street.

On a grander scale, they include the monumental work of Providence artist Dave Cole, who in 2009 installed a fluorescent vinyl 500-foot-long knit graffiti piece from a bridge in Melbourne, Australia. (It was cut loose by vandals a few hours later and crashed into the river.) Even grander was the Mexico City bus project by Magda Sayeg of the Texas knitting collective Knitta Please. She covered a bus in afghans which she knitted together into a single piece.

Many yarn bombers are stealth knitters who tag covertly at night. Jafagirls in Yellow Springs, Ohio, bombed an entire street — trees, benches, poles — in recycled knit and crocheted pieces. The Ladies Fancywork Society, based in Denver and Amsterdam, wear crocheted masks while they tag neighborhoods after dark.

The Boston scene falls on the meeker end of the graffiti knitting spectrum.

“Graffiti knitting doesn’t ever really feel organized, even in cities where it’s all around you,’’ said Karen McClellan, who lives in Boston but is the administrative assistant for Knitta Please in Texas, which has been credited with starting the yarn-bombing movement in 2005. “It’s a grass-roots thing. Someone might knit a scarf for Christmas and have yarn left over and may only do one piece in their lifetime.’’

Probably the closest thing to an activist knitter in Boston is — or was — Jessica Glesby, 26. Glesby is a graduate student in art education at Boston University, though she moved back to Vancouver last year to teach school and complete her thesis on graffiti knitting. She tagged prodigiously during the year she lived in Boston, generally as a form of political statement.

“I would plan my knits,’’ said Glesby, who once knit neckties for the statues on the Boston Women’s Memorial on Commonwealth Avenue. “I wouldn’t just see a statue and say, ‘He needs a tie,’ or ‘He needs gloves.’ These were three women who fought for women’s rights, so I put ties on them. It’s supposed to create dialogue and discussion.’’

“Cities are so mass-produced, and graffiti knitting gives the individual the opportunity to have a say in their environment,’’ she said. It gave her an opportunity to register her protest the time her bike was stolen at BU. “My graffiti knitting for a whole month had to do with bikes. I would do 15-minute knits and put a tag on different people’s bikes. I did actual bike racks. I know it didn’t reference what happened to me, but I was expressing what biking means to me.’’

Now that she’s gone, the South End Knitters appear to be the major graffiti knitting force in Boston. Eight of them met last week at their regular haunt, Flour Bakery + Café on Washington Street. They were seven women and a man, aged 23 to 55. Most live in or near the South End.

Even as they were knitting their socks, sweaters, and fingerless gloves they were scheming about their next graffiti project. It will probably be flowers.

“We want to do something to alert the neighbors that it’s springtime,’’ said Beth Levine, who works at a bank.

The members say they do not plant tags to be political.

“We’re too lazy,’’ said Tara Feld, who works at a website development company. Mostly they yarn bomb to bring cheer to the streets.

They are particularly proud of their animal-themed totem pole-like piece they knit to cover a street lamp in front of the Animal Rescue League of Boston headquarters on Chandler Street in the South End.

The Animal Rescue League has no problem with it. “It’s adorable . . . and makes the area feel warm and welcoming,’’ said a spokeswoman for the nonprofit, Jennifer Wooliscroft.

Adorable as it may be, it’s still a way of defacing public and private property and, in theory at least, could be subject to the same penalties as the spray-painted variety.

A Boston police spokeswoman, Elaine Driscoll, acknowledged in an e-mail that she had never heard of graffiti knitting and that police had not received any reports about it. Still, she said, it is technically considered defacing property and littering.

“If someone has artwork that they would like to display, they should do so on their own property or with the permission from another property owner,’’ she said.

Leanne Prain, co-author of “Yarn Bombing: The Art of Crochet and Knit Graffiti,’’ recommended that taggers use caution in order to avoid the same fate as the Los Angeles graffiti artist who was busted in Boston in 2009 for putting stickers and posters on public property.

“Shepard Fairey got arrested,’’ she said. “Potentially there could be the same consequences.’’