Change has long helped spice the broth in JP

Plans for a Whole Foods store have aggravated old divisions, but they also reflect an evolution long underway 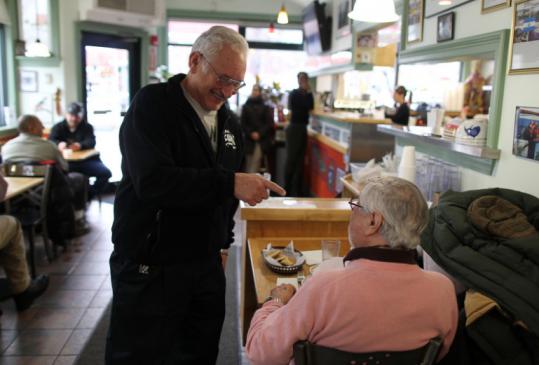 Nobel Garcia, 65, owns El Oriental de Cuba, the Cuban restaurant near the Hyde Square section of Jamaica Plain. He arrived in JP from Cuba with his family in 1955 after a stop in the South End, and he is one of the pillars of the neighborhood’s Hispanic community. Older regulars like fellow Cuban Emilio Mata are in every day for food and talk.

David Warner, 41, opened City Feed and Supply in 2008 on Centre Street in the heart of Jamaica Plain’s business district. The sign above the entrance to the hot produce and sandwich store pretty much says it all: “Fair Trade Organic Espresso.’’ The place attracts young, hip, well-educated customers, sometimes parents with strollers, who have either moved to Jamaica Plain, visit it, or hang out there while attending college nearby, along with older residents.

Rich with stories like these, Jamaica Plain has earned its reputation as one of the most dynamic neighbor hoods in Boston. Few neighborhoods have experienced the steady waves of change since the 1960s as Jamaica Plain.

Yet many outside the neighborhood, and some in it, know only a simplistic history in which white professionals moved in and displaced lower-income residents. To generalize like that is to miss the story. Shifting ethnic mixes and ongoing gentrification have reshaped Jamaica Plain, but new faces are putting their imprint on it as never before.

may be the biggest of all. Its recent purchase of Hi-Lo Foods, the anchor of the Hispanic food shopping for 47 years, has opened deep divisions within the neighborhood, especially in its Hyde Square and Jackson Square sections.

Many fear that Whole Foods, the national supermarket chain known for selling expensive, quality food, will price out low-income residents, robbing them of their native staples and diminishing their culture.

Some local food purveyors beyond Hyde Square oppose it too. Warner created a Twitter hashtag, #whereisjohnmackey, that refers to Whole Foods co-chief executive John Mackey, whose company is based in faraway Austin, Texas.

Yet some small-business people in the area have no problem with the impending arrival of Whole Foods. Damaris Pimentel, 57, who came here with her family from the Dominican Republic in 1975, shrugged and said change has come to every neighborhood of Boston.

“JP, Roslindale, West Roxbury — it’s just a city growing,’’ she said at Ultra Beauty Salon, the store in Hyde Square she has had for 28 years. “This is nothing against the Latino community. It’s sad that people don’t cater to the low-income community. It’s very hard for low-income people to stay in the inner city. Rents are crazy. But we can’t just feel sorry about the past. The Hispanic community is bigger than one store.’’

The percentage of Hispanics in Jamaica Plain has decreased by more than 26 percent from 2000 to 2009, according to the American Community Survey conducted by the US Census Bureau, which estimates changes in towns and cities across the country. (Because they are estimates, many of its numbers come with large margins of error.)

Indeed, some people have left because they can no longer afford the rents. (A two-bedroom apartment in the Hyde Square area can cost $1,400 a month, said Garcia.) Some older Hispanics have moved out for better housing. Pimentel now lives in Hyde Park. “The only reason I moved was I wanted a small, single-family house,’’ she said.

Felix Del Valle, 78, who arrived in the Hyde Square section of Jamaica Plain from Puerto Rico with his family in 1955, now lives in West Roxbury. “I found a quiet opportunity,’’ he said.

Still others happened to catch the real estate market bubble and sold the homes they had owned for decades at huge profits.

Warner considers the spine of the neighborhood to be the white, progressive activists who came in the 1960s and ’70s and stayed. They came for cheap rent, subway access, green space, and the tolerance that was defining the neighborhood. Warner’s parents were like that, and he said he has always admired such people for their values. Their ranks grew along with artists and musicians to produce a rich cultural stew. If Boston could be said to have a Bohemian neighborhood, Jamaica Plain was it.

But then Warner didn’t just blow in with his store on Centre Street. He arrived in Jamaica Plain with his wife in 1992 looking for a job and, after years of carpentry, opened the original City Feed in 2000 in a small store in the Stony Brook section. The place has drawn a loyal customer base over the years for his fresh produce as well as standard convenience staples like candy.

What is really new, he said, are all the people demanding fresh, healthy, local food, and that is what he promotes. His produce accounts for half his sales.

“The food economy is the new guard,’’ said Warner, who said it is a selling point for people moving into the neighborhood. “Real estate agents use our store in their pitches. I get courted by developers who want me to open a City Feed to help sell condos.’’

Despite his success, Warner said he can’t afford to buy a house in Jamaica Plain. He will always have City Feed, but he said he may eventually leave to find a house elsewhere for his family. Still, Warner loves the sense of community that has made Jamaica Plain famous and worries about its future when Whole Foods moves in. “For me, it’s more about local relationships,’’ he said. “Who’s going to help shovel out your car?’’

Tony Tavarez, 42, is also part of the new food wave. He came with his Dominican family to Jamaica Plain in 1985 and still lives near Hyde Square with his wife and children. After a successful six-year run as sales manager of Telemundo, the television network owned by NBC that broadcasts in Spanish, he decided to try something else.

He opened a tiny sandwich shop in Roslindale in 2008 called Tostada Sandwich Bar, selling his native Dominican food. It did well, and this year he opened another across from the Stop & Shop close to Jackson Square. Unlike some other restaurants in the area, his operation trumpets healthy food.

“People are thinking more about healthy eating,’’ he said. “I have nothing fried. I don’t sell cold cuts.’’ He said all his fruit is fresh, and he uses cheese he buys in New York from the Domincan Republic.

State Representative Jeffrey Sanchez moved to nearby Mission Hill as a youngster with his Puerto Rican family in the ’60s, when the influx of Hispanic people to Jamaica Plain began.

There are plenty of two-stop Hispanics in Jamaica Plain. “Many came from the South End,’’ Sanchez said. After Hispanics first settled there, usually drawn by relatives who were already there looking for a better life, their numbers increased, and they needed more room, cheap rent, and job possibilities.

The Hyde Square/Jackson Square neighborhood fit the bill. The jobs could be anywhere. Many found work in Boston’s hotel industry, while others worked outside of Boston. Garcia’s father traveled to a job in Everett every day for years. Others did agricultural work outside the city, said Sanchez.

The second wave of Hispanics were the Dominicans who started coming in the ’80s and are now by far the biggest Hispanic group in the neighborhood. Many hailed from Bani, a city in the Dominican Republic, notes Sanchez.

Former ace pitcher Pedro Martinez used to get his hair cut during his years in Boston from fellow Dominican Juan Fernandez, who owns the Fernandez Barber Shop in the heart of JP’s Hispanic district. Martinez heard about the place from his cousin, who got his hair cut there.

“He never talked baseball,’’ said Fernandez, 36, a born entrepreneur. In his early 20s, Fernandez scraped together the money to buy the barbershop and, with help from the seller, bought the building in 1997. He now lives with his wife and five kids over the shop.

Gerry Burke, who was born and raised in JP, helps his son run the neighborhood fixture Doyle’s Cafe. Now 70, he recalls that it used to be overwhelmingly Irish, mixed with Germans, Italians, and French Canadians.

“I miss the camaraderie of the people I grew up with,’’ he said, “but things are positively better.’’

He also recalls in the late ’60s when the Washington Street area where his saloon is located was a scary place to venture. “The police wouldn’t come down here.’’ All in all, he said, “These are the good old days.’’