In the weeks since the Tucson shootings left six people dead and 13 wounded, I’ve heard a lot of denial on my campus and elsewhere. I’ve heard, for instance, that the alleged shooter, Jared Lee Loughner, 22, was determined to commit violence and would have succeeded with or without a gun. I’ve heard too many people imply that lunatics will be lunatics, and there’s just nothing to be done about them. And I’ve heard that it can’t happen here – not in our state, not at our school. None of this is true.

For too long, we’ve been in denial about the risk of domestic terrorism on college campuses. In one 2009 study, the majority of college counseling centers surveyed said they were unlikely to discuss guns with students seeking mental health treatment. And a 2008 survey of university police chiefs revealed that the primary barrier to adopting campaigns to prevent gun violence was the belief that it “was not a problem on their campus.” This from a sample of about 400 colleges where 1 in 4 had experienced a firearm incident that past year.

The truth is, colleges aren’t ivory towers, and student-age gun owners tend to be more dangerous, not less, than the general public. “Their brains are still developing, and they don’t have the same impulse or judgment control as adults,” says Daniel Vice, senior attorney for the Brady Center to Prevent Gun Violence. “So there’s a much greater danger when young people get access to firearms.” Harvard researchers have also found that student gun owners are less law-abiding than their peers and more likely to engage in high-risk behaviors, such as binge drinking.

Even though 18- to 20-year-olds make up only 5 percent of the US population, Vice says, they are responsible for about 20 percent of the homicide and manslaughter cases.

At the memorial service in Tucson last month, President Obama assumed the role of healer in chief. He was right to call for a renewed faith in civility, but avoiding the subject of how to improve national safety was hardly a profile in courage. It was a missed opportunity to push forward policy that could reduce the chance that such tragedies will happen again.

Many political pundits have argued that new legislation would “politicize” the memories of the victims. But after Seung-Hui Cho opened fire at Virginia Tech in 2007, lawmakers ushered in changes that make it easier to work around privacy rules and report students that seem dangerous. Cho killed 32 people; the Arizona shooter killed six – there can’t be a minimum body count under which legislative change is appropriate.

In Loughner’s case, the warning signs he allegedly exhibited were never raised by a federal background-check system that vets gun buyers. The Army rejected him over a failed drug test, but that didn’t raise any red flags when he went to purchase a firearm. After multiple run-ins with campus police, Pima Community College suspended Loughner. Campus officials told him he could only return with a note from a mental health professional saying he wasn’t a threat to himself or others.

For whatever reason -- privacy rules, a lack of explicit threats -- Pima apparently did not then communicate its concerns to outside authorities. So when Loughner sought to buy a gun two months after the suspension, his background check turned up clean. Something is wrong when a man is judged too dangerous to remain in school, but not too dangerous to own a gun.

Those concerned about such security gaps must push for national legislation that lays the groundwork for greater collaboration between our universities and federal and state authorities. We need a revitalized Brady Act, one that targets young Americans and encourages universities and high schools to always share information about troubled students.

This is a complicated problem, this balancing of student privacy and public safety, but we must find a solution. We cannot afford another Virginia Tech, another Tucson.

In his ode to civic virtues, the president said the shooting had provoked a national conversation on the merits of gun safety laws, yet he has not demanded reforms. He said the killings forced us to reflect on the future. But the time for that has passed – now is the time to act.

Alexander Heffner is a junior at Harvard University. Send comments to magazine@globe.com. 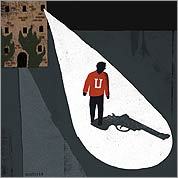 (Illustration by Justin Renteria)
Read more from this issue.
More in weddings
Globe Magazine on Twitter
Your comment is subject to the rules of our Posting Policy
This comment may appear on your public profile. Public Profile FAQ