THIS STORY HAS BEEN FORMATTED FOR EASY PRINTING
Wintertime Survival Guide

Think a slippery commute makes your job tough? Meet three people who face down the weather for work. 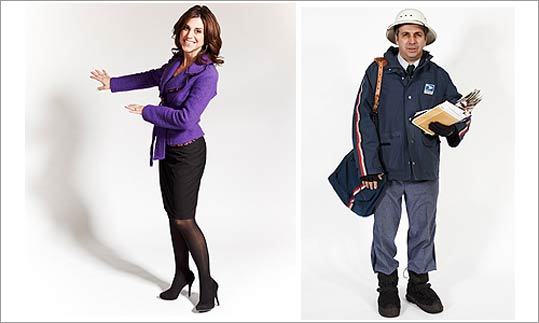 People don’t call me so much, but they e-mail and Twitter [their complaints]. It’s a way to say things they wouldn’t otherwise. I generally kill them with kindness.

Generally, the format of our show is so laid-back that people are laid-back with me. Sometimes that’s wonderful, and sometimes not, like when I am in the toilet-paper aisle of the grocery store and people recognize me. I’ve been at this long enough, it’s hard to hide. If people recognize me in the summer, it’s more of just a “Hey.” In the winter, it’s more questions and conversation about the weather.

Last February, I had the biggest forecast bust I’ve had. I don’t know a forecaster who got the storm right. Because of the forecasts [for a blizzard that didn’t materialize], the government closed down a lot of schools and things. There was a huge domino effect that shined a very large, negative light on meteorologists. The next day, I put a paper bag over my head on the air.

Mike Lenfestey, 33, has been a lobsterman for 12 years on the Maine island of Frenchboro. He’s hauling his traps by himself this winter.

I’ve heard a lot of people say that lobstering is an easy job, but they are referring to the summer. It’s a lot of backbreaking work, which is magnified in the winter. We have to do what we call “picking our days.” If it’s below 15 degrees, we wait until it heats up to about 18 degrees.

The moisture in the wintertime is what gets most of us. If your skin is exposed, water just penetrates right through you. We usually have a pair of bib trousers and, under that, three or four layers – thermal clothes to pants to liner pants. We wear three sweat shirts. We look swollen.

The hands are the worst, because they always are in contact with water. I wear two pairs of gloves: rubber liners and a cotton pair. I dip my hands in hot water to warm them. But once the gloves get a hole in them, the hot water gets in. If your hand gets wet, it will get cold.

Even on the good days in the winter, the water is 10 times rougher than on the worst day in the summer. In summer, a light breeze is 5 to 10 knots. In the winter, it’s 20 knots.

If I could, I’d probably stop lobstering in the winter, but it’s hard to stay home and see the bills not getting paid.

Domenic Corsetti, 52, began working for the US Postal Service in 1988. He’s been making about 300 deliveries a day by truck and on foot in Lexington since 2007.

In the winter, I dress in layers, and I wear a pith helmet. If I fall down, the pith helmet protects me. But really I wear it because sometimes you get those 30-degree days, and the snow in the trees and on rooftops starts to melt and can drop on your head. When you wear a pith helmet, it slides right off.

Sometimes gloves can be a hindrance, so I wear one on one hand and tuck the other glove in my coat. My hands have gone numb. Once you start going, keep going. That’s the key. You stop, now you get a chill up your spine you can’t get rid of for 25 minutes.

I’ve taken a few spills. You have your bag with you, and you hope it’s in the right place at the right time to give you some padding. Coming down stairs, if you hit a patch of ice, especially if it’s clear ice, and you have your rubber boots on, there you go. You hope no one was looking.

When it’s icy, which it was yesterday, you feel it at the end of the day. I felt it last night, that’s for sure. My wife said, “Are you coming out with us?” I told her, “I’m hanging in.”