THIS STORY HAS BEEN FORMATTED FOR EASY PRINTING
Winter Survival Guide

When it comes to weather, New Englanders sure get the short end of the thermometer. And we shouldn’t want it any other way. 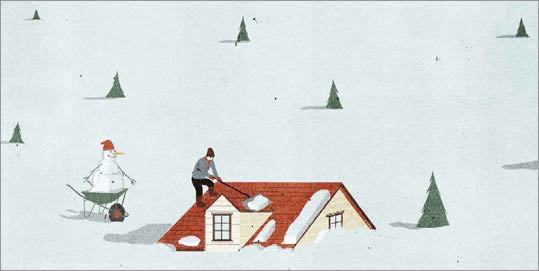 We find ourselves in the frigid, gloomy pit of another Boston winter. Twinkling Christmas lights are a dim memory, and the front hall is littered with unmatched gloves and boots standing in dirty puddles. Potholes proliferate, and black ice threatens bodily harm.

’Tis the whining time of year.

And although I usually join in the annual chorus of complaint, today I argue for the charms of the permafrost season.

First, there is beauty. Really. Winter reveals the architecture of the trees, clotted with bird nests and squirrel burrows, reaching heavenward. Short but vivid sunsets illuminate the Charles. And if you take out the earbuds, you’ll hear the sacred quiet of the city on a frosty night, the crunch of your boots on the snow, the sighs of cars passing in the street.

But even when it gets ugly – and let’s be honest, ugly it gets – a New England winter returns us to the pleasures of home. Heat up some soup. Get snug with a story. Dive under the blankets with your honey, and lo, the sluggish are made lively again.

There’s a kind of Puritan wisdom embedded in this sepia chapter of the year. The winds that keep us so much indoors also turn us inward. This is prime time for concentration, for work, creativity, and thinking big thoughts. Do you doubt the correlation between the annual hard freeze and the number of great local universities and per capita Nobels?

Winter makes us smart in a hundred little ways, too. We outfox the cold with technologies both old (wool socks) and new (Gore-Tex boots). We devise cunning strategies to defeat cabin fever: chili cook-offs, game night at the neighborhood bar, a visit to the ICA, to the MFA, to the Children’s Museum.

Our seasonal misery builds community like a pennant race. Waiting for the bus, strangers meet one another’s eyes without reservation and debate the weather. (Worse than last year? Global warming?) Shovelers help each other dig out.

And we don’t just lie down and let winter have its way with us. No, we fire up the hope engine and remember that even though February feels like the end of days, it’s really nothing but a speed bump on the way to that cottage on Cape Cod, that beach in Ipswich. It’s about discipline and willpower and arguing yourself out of attacks of seasonal affective disorder.

She says, “March is even worse.”

You say, “Yeah, but by then it’s still light out when I get home from work.”

“One more snowstorm and I’m moving to California.”

“You’d rather have earthquakes, mudslides, and wildfires?”

We also rejoice in our little “victories” over Old Man Winter: the nor’easter that clobbers New York and D.C. yet leaves us smug and dry; the blizzard that ends at midnight on Saturday, so there’s sledding and cross-country skiing on Sunday, with time to clean up before Monday’s commute.

It’s going to be weeks – and weeks – before the first robin lands, so during the upcoming slog until snowdrops replace snowbanks, I suggest you dig deep and embrace your inner Pilgrim. Go forth and meet those deadlines early, teach yourself to play the ukulele, throw another log on the fire, and don’t skimp on the whipped cream in your hot chocolate. That’s another gift of the Boston winter: The size of your thighs ain’t nobody’s business but your own.

Anita Diamant, who lives in Newton, is the author of The Red Tent and 11 other books. Her newest novel, Day After Night, is now out in paperback. Send comments to magazine@globe.com.