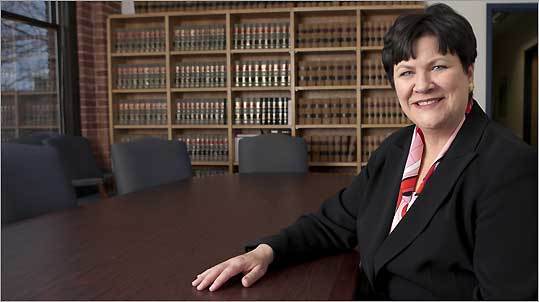 A media storm can rise and break so suddenly that nobody ever sees it coming. It touches ground in curious pieces – a hospice in Florida, where a woman named Terri Schiavo waits to die, a park in Washington, D.C., where a congressional intern is “last seen” while jogging – and the effect is cyclonic, drawing into the storm all kinds of social and cultural forces that swirl around until the storm sweeps the entire news cycle into it, and the actual event that started it all is lost in a roiling boil of angry argument, unmoored opinion, wailing preachers, and endless, roaring gales of bloviation about What It All Really Means. Last March 29, one of these storms erupted in Northampton, when a woman named Elizabeth Scheibel, who is the northwestern district attorney with jurisdiction over Hampshire and Franklin counties, stepped up to a microphone and read a statement.

Several months earlier, on January 14, a young woman named Phoebe Prince, a student from Ireland who had been attending South Hadley High School, hanged herself with a scarf that her sister had given her for Christmas. She was 15 years old. Investigators soon determined that she had been subjected to a merciless campaign of bullying by fellow students and that it had reached a kind of awful crescendo on the day that she took her own life. Now Scheibel was stepping up to announce the indictments of six of Prince’s classmates for various crimes relating to her death, ranging from criminal harassment and stalking to civil rights violations and statutory rape. Three of the defendants would be tried as adults. And right there, in downtown Northampton, which looks as if it was put together by the urban design firm of Quaint and Adorable LLC, the storm broke around Scheibel.

“I did not expect that,” the 55-year-old prosecutor says today. “We’re not naive. We read what’s going on. But, quite honestly, you guys from the east don’t cover us much at all. We were aware of some kind of attention in the background about what we were going to do, but the onslaught came late in the afternoon of the 29th and clearly, then, on the 30th.”

Everything changed thunderously in the days after the death of Prince and Scheibel’s announcement that students would be prosecuted in connection with it. We have had a heated national debate about how best to handle the problem of out-of-control school bullying. On March 11, the Massachusetts Senate approved “Phoebe’s Law,” an anti-bullying measure that advanced in the immediate aftermath of Prince’s death. The bill was subsequently passed in the House and signed into law by Governor Deval Patrick. Since then, the law has been criticized as being too broadly drawn, and Scheibel’s decision to prosecute the students has also come under fire, most notably in a series last summer in the online magazine Slate, in which a writer and lawyer named Emily Bazelon cited Prince’s mental state, as well as a previous suicide attempt, to argue that Scheibel had overreacted to public outrage and brought charges that never should have been brought.

“I can’t say I was surprised” by the Slate series, says Scheibel, who has not dropped any of the charges. “I’ve been doing this a long time. I’ve been working with ‘blame the victim’ and ‘you overreach’ and all that. I don’t agree with [Bazelon’s] assessment, that’s all.”

Adding to the scrutiny was the fact that Scheibel still lives in South Hadley, where she grew up. She is a graduate of South Hadley High School herself. “It wasn’t easy,” she admits. “It was maybe a little more difficult, living in the town and working in this area.”

One of the little ironies in the Prince case is that it blew up just as Scheibel was getting ready to retire. She started out in college at Mount Holyoke aiming to be a psychobiologist, studying the minds of marmosets and planning to perhaps become a veterinarian. But then she met her future husband, who had just passed the bar and was opening a practice in South Hadley. She went to Western New England College’s law school and after graduation joined the Hampden County district attorney’s office. She worked there for eight years before moving up to the northwestern DA’s office as first assistant. In 1993, Governor William Weld, seeing an opportunity, made northwestern DA Judd Carhart a judge and appointed Scheibel the first female district attorney in the history of the Commonwealth.

But by the time she was reelected four years ago, Scheibel was growing tired of the grind of the job. One Thanksgiving, she barely got the TV crews out of her house in time for her guests to arrive. So she decided that this would be her last term. But her last year in office has been the wildest. On December 27, 2009, more than a dozen arson fires were set in Northampton during one 90-minute period. (“Crimes up here can be kind of funky,” Scheibel says.) Almost two weeks later, police arrested a suspect and charged him with the murder of the two people who had perished in the fires.

Nine days after that, they found Phoebe Prince’s body. Then, in March, Scheibel sought charges against the students, because she simply thought it was the correct thing to do. As the cases have dragged on, however, it has become clear that Scheibel won’t be around to shepherd them to their conclusions. “When one develops a relationship with family members, with survivors, it’s a tough thing to say to them that you’re not going to be able to see it through,” she says. She adds that she’s not sure if she’ll go to any of the trials, which would begin this spring, at the earliest, when the storm may rise again.

Charles P. Pierce can be reached at cpierce@globe.com.

The Life of the party: Scott Brown

By winning "the Kennedy seat," the Republican shocked the political world and inspired a legion of long-shot challengers.
More notable Bostonians:
Your comment is subject to the rules of our Posting Policy
This comment may appear on your public profile. Public Profile FAQ