Living with a stutter

A new movie, ‘The King’s Speech,’ is shining a new light on this mysterious disorder 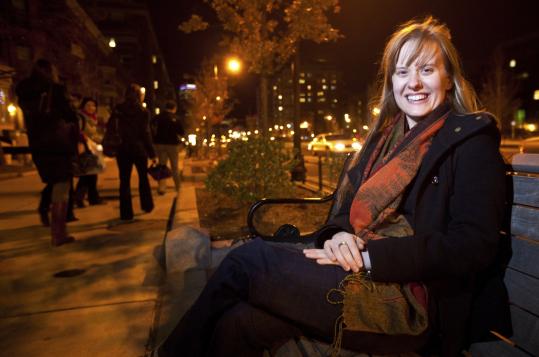 April Dobbs has stuttered all her life. “I’d leave a dinner party feeling defeated,’’ she said. Dobbs has found help in a speech program at Boston University. (Aram Boghosian for The Boston Globe)
By Sam Allis Globe Staff / December 28, 2010

In 1925, the Duke of York spoke to a huge crowd in London’s Wembley Stadium. The man who was to become King George VI of England had a debilitating stutter that had humiliated him throughout his life. In the new movie “The King’s Speech,’’ you see the terror in his face as he approaches the microphone, and you agonize with him as he tries and fails, again and again, to plow through sentences. The address was a disaster, and the specialists he sought help from were useless — one made George try to talk with seven marbles in his mouth. {bull} The film has triggered a spike in public awareness of the disorder. “It has been extraordinary,’’ says Jane Fraser, president of the Stuttering Foundation of America, a Memphis-based nonprofit that provides resources, services, and support to people who stutter. “It has done in one fell swoop what 60 years have not been able to do in terms of educating the public.’’

April Dobbs knows all about the fear of speaking. The 25-year-old PhD student in plant genetics at Harvard has stuttered noticeably all her life. Dobbs says she does fine one-on-one, as she generally does in large groups. What dismantles her are small groups of people, some of whom she doesn’t know, in tight quarters in places like bars with loud ambient noise in the background.

“I can actually pinpoint events,’’ Dobbs says. “I’d leave a dinner party feeling defeated. I had something cool to say but didn’t say it. Not to do it is worse. The pain is worse.’’

She remembers in the past having to stand up on the first day of class and state her name. “It was a double-whammy,’’ she recalls. “I had trouble with the As and Ds. I learned to say ‘April Dobbs’ as one word.’’

Eager to do something about her condition, she searched online for stuttering therapists when she arrived in Cambridge last September. She found help for her stuttering at the Joseph Germono Fluency Clinic in the Sargent College Department of Speech, Language, and Hearing Sciences at Boston University. (This is a clinic, so it’s not free. The price for 10 individual sessions is $250, $125 for the same number of group sessions. There are student discounts and there is a sliding scale based on need.)

“I focused on the speaking rate,’’ Dobbs says. “I slowed down. I got help on the psychological end, too. I met some of the most interesting people I’ve ever met. It was a much more supportive environment.’’ As a result, her fluency has improved and she plans to continue work there.

At the center, which was founded in 1979 by Joseph Germono, a professor in BU’s communications disorders department who died in 1993, experts use a three-prong strategy to help stutterers, says Diane Parris, a speech language pathologist and the center’s codirector with stuttering specialist Adriana DiGrande. The first is to improve one’s fluency — the ability to maintain a smooth flow of speech and manage moments of stuttering. This involves physically manipulating the muscles used in speech production. There are exercises in breathing and the relaxation of muscles along with talking at a slower speed.

The second involves cognitive therapy to reduce the dark self-doubt that can overwhelm a stutterer. The third step, which is the core of the entire approach, is to raise the confidence of the stutterer.

“Our therapy really is about helping a person find the courage and confidence to speak, even if they stutter, in order to find their voice and live a fulfilled life,’’ says Parris.

We still know precious little about stuttering. What Winston Churchill once famously said about Russia applies to stuttering as well: It is a riddle, wrapped in a mystery, inside an enigma. Specialists do know it’s a neurologically based disorder that impairs one’s ability to time and sequence speech movements. There is a genetic component — 60 percent of stutterers have another family member who also stutters — and a huge gender difference as well. Men are four times more likely to stutter than women. Most children who stutter outgrow the disorder as they get older. Still, 1 percent of the population, about 3 million people stutter, according to the Stuttering Foundation of America.

Scientists have made progress — researchers have located a mutation in three genes that affect some people who stutter. While this is tantalizing, experts remain stumped about the stuttering blueprint.

Becky Masterson, a 35-year-old aerospace engineer, works alone with Missy Licata, one of the half-dozen Boston University clinical graduate students who help clients. Masterson follows a program called Camperdown that helps improve fluency to retrain her muscle movements. She speaks into a laptop with an internal camera on its screen that records both her speech and facial movements. She speaks slowly, initially extending each word to an unnatural degree. Through the camera, Masterson and Licata can review and assess her performance. She also reads at home to her 18-month-old son.

For Masterson, like others, the issue was accepting her stutter. And then confronting it.

Stanley Fisher, 74, a professor at Boston University School of Law, understands all too well. He has taught there since 1968, unaware most of those years that the clinic existed. He finally took sessions for eight months between 2005 and 2006, and says the experience changed his life. His stuttering was and is barely noticeable, yet it wreaked havoc on his life. As an assistant district attorney in Norfolk County, he’d stand before a 40-person jury pool. “My palms would sweat. Saying my name was the hardest part.’’

Yet he never told anyone how hard it was being up there. “I’ve been isolated for so long,’’ says Fisher. “Ninety-nine percent of it was inside me my whole life.’’ He calls himself “a covert stutterer’’ who fooled others because he was adept at avoiding speech blockage by substituting easier words. “It’s like an African-American passing as white,’’ he says. “I hid it.’’

Fisher didn’t have to go to the extremes George VI did. The king ultimately found relief with help from an Australian speech therapist’s idiosyncratic methods, but all Fisher did was out himself. Since September 2006, he has told his students at the first class of the year that he is a stutterer. “I’m no longer anxious in advance of a talk,’’ he says. “The real issue is how I feel about myself. It’s a question of my own attitudes. Could I accept myself?’’