THIS STORY HAS BEEN FORMATTED FOR EASY PRINTING
Voices

The skinny on Dukan’s diet

It worked for Gisele and ‘Waity Katie,’ but not everybody’s getting with the plan 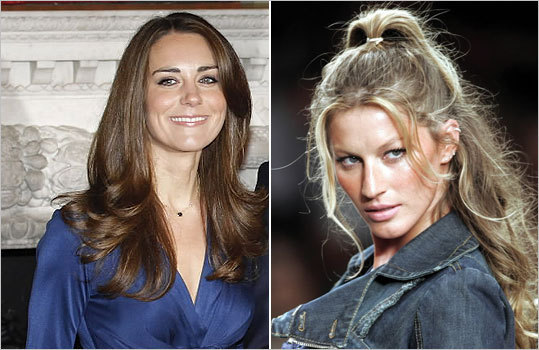 I was in London last week, negotiating prime shooting locations for Globe photographers assigned to the royal wedding — just kidding! I was however reading the local newspapers, which were cheerfully ignoring Ireland’s impending bankruptcy and the shooting war on the Korean peninsula to report on . . . royal fiancee Kate Middleton’s diet. She and her slenderific Mum, the former air hostess, are faithful followers of the Dukan diet, the creation of French nutritionist Pierre Dukan. The tabloids call her “Waity Katie’’ because she so patiently waited for Prince William to pop the royal question. But they don’t call the sylph-like Ms. Middleton “Weighty Katie,’’ if you gather my drift.

Who helped put the Dukan diet on the map in the English-speaking world? None other than Mrs. Tom Brady, a.k.a. supermodel Bundchen, who used the bizarre regimen to shed pounds after the birth of her son Benjamin. So we come full circle.

There is a great deal of misinformation about the four-phased Dukan diet, to which I plan to make my own modest contribution. Here are the key stages, per the Dukan website:

1. Attack! [Yes, it’s called that.] For the first week or so, the dieter eats only protein-rich foods, selected from a list of 72 approved delicacies. “Prawns and things,’’ was how un-Weighty Katie described it to one London newspaper. Think Dr. Atkins, on speed.

2. Cruise. “Leading to the True Weight,’’ the website explains. “During this phase, the diet alternates Pure Protein days (PP phases) and Proteins accompanied with 28 recommended Vegetables.’’

4. Stabilization. “This phase is both the easiest and most essential in our slimming method because 95% of people who follow a diet put back on the weight they have lost.’’

While the website claims millions of devotees and merrily flogs specialty food products alongside upbeat messages from Dukan, not everyone appears to be with the program. Just last week the Institut Pasteur in Lille released a study asserting that “France’s most popular weight-loss regimes, including the number one Dukan diet, are ineffective and potentially dangerous to people’s health,’’ according to Le Parisien newspaper. Research chief Jean-Michel Lecerf said Dukan-style diets “disrupted the body’s natural metabolism and led to serious nutritional imbalances.’’

Closer to home, Dr. Frank Sacks, a Harvard School of Public Health nutrition professor, lumped Dukan in with the other diets du jour: “South Beach, Atkins, Ornish, they are all different from one another, and they all work in the short run. You lose some water and lean body fat, and motivated people say, ‘Wow this could be the thing for me.’ It’s a self-deception that a diet like this has any special powers. Ultimately, weight loss requires a lot of thinking about food, especially in the regain phase.’’

I lobbed a few questions into Dukan Central but never heard back. I hoped to discuss Dukan’s 2003 book, “Men Prefer Full-Figured Women’’ (“Les Hommes Preferent les Rondes’’). Here is an excerpt: “Women of all ages, for more than fifty years you have been asked to starve yourselves, assured that thinness will make you more beautiful and more attractive. What has that achieved? To make you feel guilty when you eat, and to inhibit you when a man’s hand rests on your curves.

“If you are round, very well rounded, or fleshy . . . Read this book, it can give you strength, to resist the tremendous pressure for thinness and lead you to ask yourself this crazy question: What if I am more beautiful and sexy just the way I am.’’ Odd that Dukan has reversed course so quickly, and wants the women of France to starve themselves à la Gisele.

Wait! I thought “French Women Don’t Get Fat’’ — wasn’t that the name of a big bestseller a few years ago? Author Mireille Guiliano, who has just published a cookbook, allows that some French women do get fat, but she suspects the Dukan diet won’t help them much: “As anyone with a bit of common sense knows, diets don’t work, otherwise all women would be thin [read: normal], and that would be splendid, wouldn’t it?’’

Alex Beam is a Globe columnist. His e-dress is beam@globe.com.