A teacher on and off the court 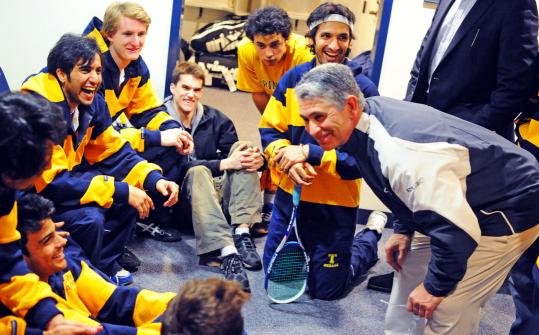 Paul Assaiante , whose men’s team at Trinity College in Hartford has the longest win streak in college sports, has written “Run to the Roar: Coaching to Overcome Fear.’’

Q. So where does your winning streak stand now, and when are you coming here for the always-tumultuous Harvard match?

Q. How does the streak affect you, and the team?

A. I do everything in my power to ignore it. I don’t think about it for one second. It does, however, have a big bearing on the team, in that they don’t want to be the ones on the court when the streak ends. I try to tell them that 15 years from now, when they return to campus, this number that feels so important to you now will mean nothing. They’ll talk about the van ride in the snow to Williamstown, or the time we came together as a team when [a coach’s] father died.

Q. Squash is a consummately individual sport, yet all your successes have come as a team. How did that happen?

A. Early on it occurred to me that if I coached the players as individuals, which is how they were raised, then that would just be more of the same. So I decided to begin teaching them a new sport, which is a team sport, in which everyone has a role. Our roles are based on seniority. Our upperclassmen run the show. Even if a freshman is playing number one, he is treated with disdain, so he will appreciate the concept of the rite of passage, and the loyalty that comes from time in service. They are learning something brand new — to care about somebody else.

Q. You tell two stories in this book. You dwell on several of Trinity’s extraordinary, come-from-behind victories, then suddenly you write about your 34-year-old son, Matthew, who has a serious drug problem and is in jail at the end of the book. Why?

A. I’m a teacher, and my job is to convey messages. Matthew for me is my portrait of Dorian Gray. I failed him terribly. I wish I could have that time back. The point I want to make is that having my team’s name on Connecticut highway signs and celebrating our winning streak is great. But it counts more in life to love the people close to you and give them the time they need.

Q. I was shocked to learn that you recruit college players from the pro squash tour.

A. That’s where all the top players come from. It’s the same in college tennis. These kids have played their sport at the highest level. They play the pro events mostly as amateurs. If they win money, they adhere to the NCAA rules by ensuring that their prize money is always less than their expenses. A 14-year-old child from Belmont can come play in the Boston Open, but he can’t earn more than seven dollars, or whatever the cab fare is.

A. It’s exploding in the US, because people have learned that this sport might be a ticket to a better school than their children might normally get into. But it was certainly slow to the dance. Squash was old school, associated with country clubs and private schools like St. Paul’s. Now it’s become much more mainstream. The second piece of the answer is that it’s not a very good spectator sport. On TV, for instance, the camera can’t pick up the ball, which moves too fast.

Alex Beam can be reached at beam@globe.com.