Efforts are up to push diabetes down

Nutrition programs, group doctor visits, and social worker pep talks are some of the local attempts to stave off a growing threat from the disease in Massachusetts and nationwide 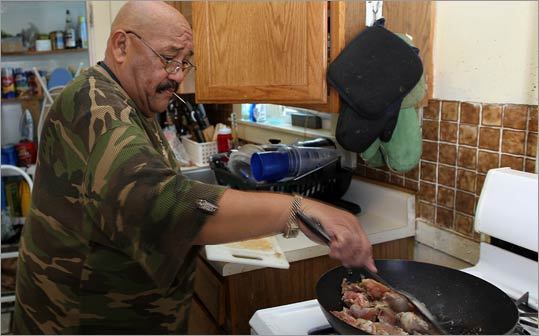 If Stephen Lezama were to pick his poison, it would be chocolate bars. The 66-year-old used to bring two of them to his overnight police dispatching shift at Wentworth Institute of Technology in Boston — a habit that continued even after he was diagnosed with type 2 diabetes, which generally strikes as people gain weight and become more sedentary with age.

His doctor recommended a twice-monthly nutrition program at the Codman Square Health Center in Dorchester, which helped Lezama, a Trinidad native who loves to cook, jettison the Cadbury bars and also go easier on the mega-meals loaded with rice.

But he started to slide after the program ended, and it wasn’t until he started another more intensive intervention earlier this year — this one sends a social worker to his home once a week — that he got back on the right food track.

Success on the exercise front has been more elusive.

Lezama’s struggles, say health specialists, are becoming alarmingly commonplace and illustrate the significant challenges faced in heading off a projected tsunami of diabetes.

A recent federal government report concluded that the number of adults with diabetes could double or triple by the year 2050, if current trends continue. One in 10 has the disease now, but as many as one in three adults could develop diabetes as people live longer and minority populations, which are more at risk for type 2 diabetes, increase, according to the Centers for Disease Control and Prevention.

“The direction we are headed in is unsustainable,’’ said Ann Albright, director of CDC’s Division of Diabetes Translation.

“Let’s hope we don’t have to get to the brink of the cliff,’’ she said, before specialists establish the best plans of attack.

The disease’s toll is already heavy. Diabetics have medical costs that are more than twice those of people without the disease — running up an estimated $174 billion annually, says the CDC.

Diabetics have trouble converting their food into energy because their bodies either lack or are unable to use the hormone insulin, which helps sugar enter cells. If their disease is left uncontrolled, sugar and fats accumulate in the blood and, over time, damage vessels and nerves, often leading to a cascade of other health issues, including kidney failure, vision problems, and poor circulation in the legs and feet, which can lead to amputations.

Type 1 diabetes, which accounts for only about 5 percent of cases, generally strikes in childhood and still puzzles scientists, who believe this form may be linked to an autoimmune disorder and possibly also be genetic. There is no known way to prevent this type of diabetes.

But what is especially frustrating to health specialists is that type 2 diabetes — the remaining 95 percent — is largely preventable. Exercise, weight control, and good nutrition can often ward it off.

Yet consider the landscape surrounding the Codman Square Health Center in Dorchester.

Bill Walczak, the center’s executive director, said that not long ago, he asked a group of 120 high school students at the center how many had immediate family members with diabetes. Every single hand went up.

“That was stunning, even to me,’’ Walczak said. “In lower-income communities, there is an expectation that when you get older, your hair gets gray and you get diabetes, because it’s so common.’’

The majority of Codman’s patients are African-American or Latino, with many immigrants from Haiti and the Caribbean. Disease trackers aren’t entirely sure why diabetes strikes hardest in minority communities, but believe the answer is multifaceted, including genetics, higher obesity rates, and poverty, which can affect the availability of quality food, medical care, even the safety of exercise and recreation options in the community.

“If you are trying to live on 20 bucks a week for your family, you will live on macaroni and cheese; that’s a big driver,’’ said Dr. Philip Severin, the center’s medical director.

Over the past five years, Codman caregivers have struck back with a multi-pronged program aimed at changing attitudes, exercise, and nutrition habits. They’ve also changed the traditional doctors’ visits for diabetics.

Instead of the typical 10- or 15-minute session with a physician, diabetics are organized into groups of 10 that meet with caregivers for a three-hour visit, allowing each more time with specialists, but also with a group of kindred spirits.

“In the process, they build social relationships that will be supportive,’’ Walczak said. “We need more support mechanisms for patients, rather than just more drugs.’’

A 2002 study of people with elevated blood sugar levels, known as prediabetics, funded by the National Institutes of Health, found a 58 percent reduction in the risk of developing type 2 diabetes among the participants who lost between 5 and 7 percent of their body weight and got at least 150 minutes weekly of physical activity.

Success at the Codman center is measured in more modest milestones.

Beyond the Codman, state disease trackers found that the percentage of Massachusetts adults diagnosed with diabetes nearly doubled, from 4.1 to 7.4 percent, between 1994 and 2007.

“As we see the obesity prevalence continue to increase, or at least not decrease yet, we have reason to believe the diabetes risk is as high, if not higher, across the state today than in 2007,’’ said Dr. Jewel Mullen, director of the Bureau of Community Health and Prevention in the state’s Department of Public Health.

The state has launched several obesity-fighting campaigns in the past couple of years, with the twin goal of lowering rates of diabetes and related chronic diseases, Mullen said. Among the programs is Mass in Motion, which awards grants to cities and towns for creating bike paths, trails, or even upgrading sidewalks to improve walkability in a neighborhood.

For Lezama, who still has 50 pounds to lose, the issue is not a lack of places to walk — he lives near Franklin Park in Dorchester — it is the willpower. The community social worker the Codman sends to his home every week to help him stay on track has encouraged him to set modest weekly exercise goals. His latest: to walk at least once a week in the morning after his overnight shift.

“But having [the social worker] come every week,’’ Lezama said, “you get more encouragement to do the right things.’’

Get more physical activity Aim for 30 minutes of moderate physical activity at least five times a week. Take a brisk daily walk. Take the stairs instead of the elevator. If you can’t fit in a long workout, break it up into smaller sessions spread throughout the day.

Lose weight If you’re overweight, losing even 5 percent of your body weight — for example, 10 pounds if you weigh 200 pounds — can reduce the risk of diabetes.

Watch what you eat Avoid high-fat, sugary foods. (Even some low-fat foods, such as yogurt, may contain a lot of sugar.)

Decrease screen time Reduce the amount of time you spend sitting in front of a computer or TV screen.

Know your family history Diabetes tends to run in families. If your mother developed diabetes during pregnancy, you are at higher risk of developing type 2 diabetes.