At the MFA, they rely on Andrew Haines to complete the pictures 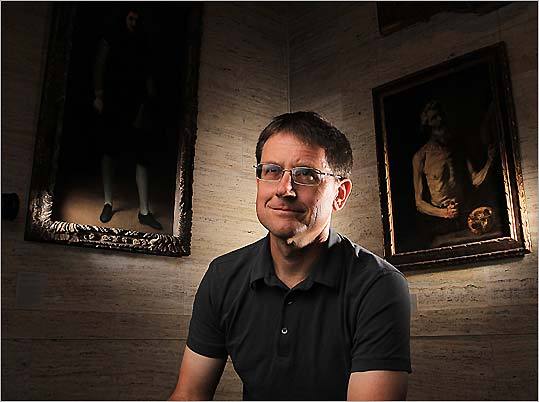 You really have to want to see Andrew Haines to find him.

His lair is hidden deep inside the Museum of Fine Arts, and reaching it requires something of an Outward Bound experience. Follow a maze of hallways, take a huge elevator, go past a long room bristling with racks of paintings in storage. There you’ll discover him — an intense, compact man in glasses, dressed in relentless black: polo jersey, jeans, and shoes.

Haines, 48, is the MFA’s first conservator of frames. (His title is a mouthful — associate conservator, furniture and frame conservation.) MFA director Malcolm Rogers named him to the newly created post in 2002, and today, Haines is, quite simply, one of the more important people in the place.

He works with curators and helps decide which frames to repair before they hold paintings that will reach the limelight in the galleries. This may require a mix and match where he combs through the vast museum collection in storage to find a frame from another painting that fits seamlessly the one in play.

“The magic of Andy is that he makes a frame look like it came with the painting,’’ says Ronni Baer, senior curator of paintings in the Art of Europe department, who has worked extensively with Haines. “He’s an unbelievable artisan and artist. Because he’s an artist — he paints himself — he knows how to look at a painting as an artist and a craftsman.’’

If an appropriate frame can’t be found in house, Haines leads the effort to buy a frame in the booming frame market. When he needs one, he checks with a frame dealer who specializes in the particular period and style he’s looking for. Frames today, he says, can run into the hundreds of thousands of dollars.

But it’s a tough call to go outside. To get an appropriate frame for a painting on the open market, the museum must rely on funds generated by an exhibition, an outside loan, or a gift from a private patron.

“There’s not enough money for frames,’’ he says. So when Haines does go outside, it’s likely for a high-profile project. For example, in preparation for the Titian, Tintoretto, Veronese exhibition that ran last year, he bought one antique frame.

But Haines is so highly skilled, he can also make a particular frame, if called upon. Baer recalls seeing a Dutch frame she loved while on a trip to Europe. She took a photograph of it and gave it to Haines, who proceeded to make a beautiful copy based entirely on it.

Frames have never been front and center in the minds of museum directors. They weren’t supposed to draw attention away from the paintings within them. “Frames are the tail of the dogs,’’ Haines says. “No one paid attention to them.’’

Yet for centuries, they flowered with the art they held. We think of brilliantly gilded wood carved in intricate patterns. Some are extravagant in detail and size, others more modest renderings from classical design.

Frames began to be marginalized with the advent of Modernism in the early 20th century and reached a low point around 1980, says Haines. “There was a museum in New York,’’ he recalls — he won’t say which one — “that discarded all of its frames and replaced them with neutral ones. Frame dealers would pick them up in dumpsters.

“Then people started paying attention to frames,’’ he continues. “There was more and more interest in them, more scholarship, and higher prices for them.’’

Collectors started buying them. Highly valued were the early-20th-century American frames made in Boston and New York — handcrafted and signed by the framer on the back. Numerous catalogs and books on frames began to appear. In 1990, for example, a catalog appeared on the Renaissance frames of New York’s Metropolitan Museum of Art.

Haines’s large work space is part carpenter shop, part laboratory where he brews elixirs to bring damaged frames back close to their original conditions. The ideal is to acquire a painting with its original frame intact, but many canvases arrive with their third or fourth one.

Up until the Renaissance, he notes, the carpenter, gilder, and painter were all paid roughly the same by the patron — often the church. It was during the Renaissance that the painter became dominant.

Haines is as much a historian as he is a brilliant conservator. His knowledge of American and European art is necessarily deep, and he can chart the changes in frames over the centuries.

Composition is a putty made of wood rosin, calcium carbonate, linseed oil, and animal glue used to create an enriched surface faster and cheaper than the traditional wood carving.

“It is a cheap way of making a great frame,’’ explains Haines. “You don’t need a carver to make it.’’ Instead, a frame maker would use a mold to replicate carved patterns in one frame that could be used in many others. Composite frames took hold in Boston around 1900 and reached their peak in quality with the Foster Brothers Framing Company and Hermann Dudley Murphy.

A bare frame that will house a portrait painted by Gilbert Stuart in London in 1780 lies on a bench. When treated, the painting will hang in the MFA’s new Arts of the Americas Wing, opening in November.

It arrived at the museum in 1924 with a poor quality frame made in the early 20th century. Working with curators, Haines found a suitable English frame of the same period on another portrait in storage that he will use for the Gilbert Stuart. Its wood is cracked, its gilding is flaking, and its gesso has separated from the wood. (Gesso is a liquid combination of chalk and animal fat that serves as a primer on wood after which paint or gilding can be better applied.)

His young assistant Allison Jackson, a second-generation frame conservator, is sanding the new gesso, now dry, that she applied with a tiny brush to fill in damaged areas. Once these fills are smooth, and after having toned the new surface with acrylics, she will finish with an alternative gilding technique. Between the two of them, Haines and Jackson treat a frame roughly every week.

Before Haines became the frame man, no one at the Museum of Fine Arts had a clue how many frames existed there. (The same is true at most art museums around the country today.) He was tasked to create a database and inventory all the painting and textile frames in the MFA.

To that end, Haines has identified, cataloged and photographed over 4,300 of the 6,000 frames so far — complete with dimensions, label information, and conservation history. The database has helped him locate countless period frames.

He has worked with the museum’s frame collection since he was hired by the MFA in 1990, focusing on frames of the American and European painting collections. Born and raised in New Jersey, he received a Bachelor in Fine Arts from the Tyler School of Art at Temple University in Philadelphia and arrived in Boston in 1984, where his rise to artistry began with installing water beds. From there he worked in a number of small frame shops in Boston until he was hired by the MFA. “This was all new to me when I arrived,’’ he says. “I learned everything here.’’

If his work at the museum weren’t enough, Haines paints every morning for an hour at a studio in his home in Jamaica Plain before his family takes over. He has painted since he was a child and has produced a sizable body of work — modern, realistic canvases that are now in both private and public collections.

What Haines does at the MFA is to perfect another kind of art that hangs on its walls. To wander through the museum with frames in mind is to discover a rich garden of artistic flora that has been hiding before our eyes.