For years, Hollywood saw Mike O’Malley only as a laugh-track sitcom guy. Now the New Hampshire native is finally getting the respect he deserves. 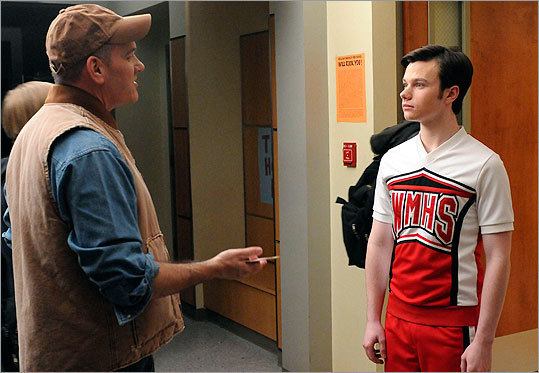 Mike O'Malley received an Emmy nomination for his role as Burt, a dad struggling to understand his gay son, in the hit show "Glee." (Michael Yarish/Fox)
By Mark Shanahan Globe Staff / July 22, 2010

LOS ANGELES — Mike O’Malley is eyeing an appetizing spread of lobster and spicy tuna at Katsuya, the Japanese restaurant as famous for its sleek Philippe Starck design as its entrees, when a young girl suddenly appears at his table.

“I wouldn’t normally do this,’’ says the girl’s father, “but Kendall is such a huge fan of yours.’’

Smiling, O’Malley puts down his chopsticks and greets his 12-year-old admirer. She compliments the actor’s performance on the Fox hit “Glee’’ and then walks away staring at his autograph. A decade ago, such a scene was almost unimaginable. After critics savaged “The Mike O’Malley Show,’’ dismissing the balding, slightly doughy star as a generic comic undeserving of his own sitcom, O’Malley wondered if he’d have to skulk home to New Hampshire, his career in Hollywood over before it began. How times have changed. O’Malley, 43, has just been nominated for an Emmy for “Glee,’’ the hit comedy that’s one of two primetime shows he appears on. O’Malley also has a growing film career that includes a role — written specially for him — in next month’s “Eat Pray Love,’’ the big-budget drama starring Julia Roberts.

“Talent trumps all in this business,’’ says “Private Practice’’ star Kate Walsh, a friend of O’Malley’s. “And Mike, as people are discovering, is very talented.’’

It’s taken a little longer than O’Malley imagined. Ryan Murphy, the co-creator of “Glee’’ and director of “Eat Pray Love,’’ admits he and many others in Hollywood overlooked the actor, viewing him as little more than a schlubby sitcom everyman. A few years ago, while Murphy was working on a pilot called “Pretty/Handsome,’’ about a father who tells his family he’s a transsexual, someone suggested he consider O’Malley for a role.

“I didn’t think he was right. I thought a half-hour guy was a half-hour guy,’’ Murphy recalls. “But Mike came in and was hilarious and heartfelt. He taught me never to underestimate people.’’

At Nashua’s Bishop Guertin High School, and later at the University of New Hampshire, O’Malley was not a kid devoted to the craft of acting. His father sang in a barbershop quartet and on occasion took his four children to the theater. But O’Malley wanted to be the centerfielder, not a movie star.

“People ask me why I became an actor, and the truth is that once you get cut from the baseball team you need another angle to get women to pay attention,’’ O’Malley counseled UNH graduates in 2006. “What better way, you say? I know . . . be good-looking and rich. But I had neither of those weapons in my arsenal.’’

O’Malley got serious in New York. He wrote plays, took acting classes, and read for parts, but jobs were scarce. A friend who worked for supplied the starving artist with free samples of oatmeal, pancake mix, and Cheerios.

“The tale of the actor struggling to make it is oft-told for a reason,’’ says O’Malley, who lives in Los Angeles now with his wife, Lisa, and their children, Fiona, Seamus, and Declan. “In New York, you have to have something unique to offer, and I wasn’t sure I did. I basically wanted to be doing whatever Tom Hanks, Michael Keaton, and Bill Murray were doing.’’

His big break came when Christopher Guest, director of “Waiting for Guffman’’ and “Best in Show,’’ cast him as “The Rick,’’ a devout and dopey Boston sports fan in a series of commercials for ESPN. Clad in a Bruins jersey and a backward baseball cap, “The Rick’’ was a favorite of frat boys and, eventually, caught the eye of network executives, who signed O’Malley to his own show.

Debuting in 1999, “The Mike O’Malley Show’’ starred O’Malley as a guy not quite ready to grow up. The cast included Walsh, Will Arnett, and O’Malley’s sister, Kerry, a successful stage actress. The critics were not kind. “The eponymous Mike O’Malley gets his 22 minutes of fame tonight,’’ hissed The Washington Post’s Tom Shales.

The show’s failure — it was canceled after just two episodes — wounded its star, who calls the experience “a flat-out disaster,’’ the low point of his professional life.

“Mike’s kind of a modest guy, so he wouldn’t let on how much it really hurt him,’’ says Arnett, who went on to star in “Arrested Development.’’ “But it was rough. It wasn’t even my show, and I handled it very poorly. Luckily, I had my friend Mr. Jameson and his friend Crushed Ice.’’

O’Malley took a deep breath. He didn’t have a Plan B.

“That was almost the end of the story,’’ he says. “I don’t do stand-up, so I couldn’t take it out on the road. I was being groomed for this opportunity, and it was a debacle.’’

None of that mattered to Greg Garcia, who cast O’Malley in “Yes, Dear,’’ a half-hour comedy that was judged harshly by tastemakers but nonetheless survived for six seasons.

“With all due respect to the journalistic community, [‘The Mike O’Malley Show’] was a disaster because people like to latch onto stories like that,’’ says Garcia, who also created “My Name Is Earl,’’ on which O’Malley had a recurring role as a gay police officer. “Mike’s capable of doing anything.’’

No one believes that more than “Glee’’ producer Murphy, who says he had O’Malley in mind when it came time to cast the show. He wanted him for the pivotal role of Burt, a suburban dad struggling to understand his gay son, Kurt. Murphy says he wrote the part, which is loosely based on his experience with his own father, specifically for O’Malley.

“It’s a real tour de force role and I knew what Mike could do,’’ says Murphy. “This isn’t an after-school special. This is a working-class dude who’s not OK with his son being gay, a guy who’s having a tough time. It’s heavy and Mike has the ability to cut through the sentiment.’’

Impressed with O’Malley’s nuanced performance on “Glee,’’ Murphy also wrote a part for him in “Eat Pray Love’’ (in theaters Aug. 13), the film based on Elizabeth Gilbert’s best-selling book. In the film, written and directed by Murphy, O’Malley plays the boyfriend of a character played by Viola Davis.

“Mike’s talent is deep,’’ Murphy says. “I will always write for Mike O’Malley.’’

So, it seems, will others. O’Malley has a plum role as Lauren Graham’s old boyfriend on “Parenthood.’’ He had a small role in George Clooney’s “Leatherheads,’’ and he’s in the upcoming comedy “Cedar Rapids,’’ starring Ed Helms of “The Hangover,’’ John C. Reilly, Sigourney Weaver, and Rob Corddry.

“Mike plays a really sycophantic [expletive], and somehow gives the character warmth and charm,’’ says Helms, who had a hand in casting O’Malley. “I always thought he was capable, but he’s also a cool guy, which is important when you’re all bundled up and shooting in Ann Arbor.’’

Friends and colleagues agree that O’Malley’s personality — laid back, loyal, and unaffected — may be his greatest strength, even more than his acting chops.

“We were on a dudes roadtrip once, walking through Arlington National Cemetery, when some guy starts yelling, ‘Hey, Jimmy!’ ’’ says Buffalo Tom singer Bill Janovitz, a confidant and occasional collaborator of O’Malley’s for more than a decade. “That was Mike’s character’s name on ‘Yes, Dear,’ and here’s this guy yelling it across the memorial. It was bizarre.’’

Ask O’Malley about his improbable second act, which now includes an Emmy nomination for outstanding guest actor in a comedy, and he cites the Red Sox.

“Look at Darnell McDonald,’’ O’Malley says, referring to the little-known outfielder who’s shown a flair for the dramatic this season. “The guy hits a walk-off and it’s game over. You never know how the story ends.’’ 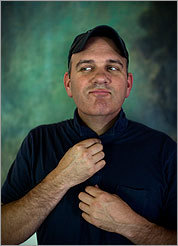