Never too late to swoon

Why are grown women smitten with today’s teen idols? 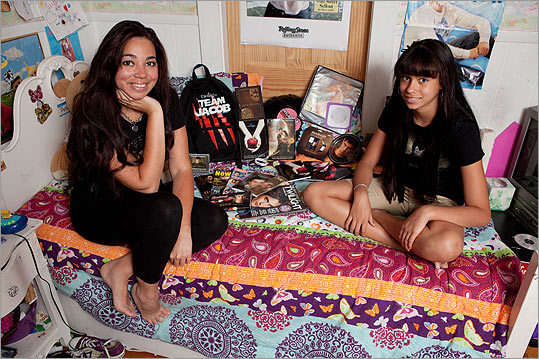 Mary Irizarry and her daughter, Areeana Colon, with some "Twilight" merchandise. (Matthew Cavanaugh for The Boston Globe)
By Beth Teitell Globe Correspondent / May 13, 2010

Like many mothers and daughters, Mary Irizarry and her 12-year-old argue sometimes. But their disputes aren’t over texting or clothing. They disagree about which male “Twilight’’ star is cuter.

“My daughter says Jacob [played by 18-year-old Taylor Lautner] is stronger and has better muscles,’’ said Irizarry 33, a salesperson and administrative assistant from Springfield, “but I think Edward [played by 24-year-old Robert Pattinson] is better looking and more romantic.’’

She allowed herself a sigh. “I’m all about Edward.’’

Anyone who has seen her Edward Cullen-emblazoned fleece blanket — enjoyed when her husband is working an overnight shift — would not disagree. “When People magazine named [Pattinson] one of the sexiest men alive, I definitely bragged about him.’’

Oh, be still her maternal bosom. Irizarry is one of those moms with schoolgirl crushes — adult women who are happily obsessed with young stars, as well as movies and TV shows aimed at teens and tweens. Unlike earlier generations of women, who either kept secret their crushes on youthful stars like Elvis or the Beatles — or simply didn’t have them, today many moms see nothing wrong in proclaiming their fascination.

“The notion of motherhood was connected with adulthood’’ in the 1950s and ’60s, said Judith E. Smith, a professor of American Studies at UMass-Boston. “Youth didn’t want the adults to get youth culture, and the adults didn’t want to get it either. Why would they? That wasn’t their world.’’

Tina Fey captured the mindset recently on “Saturday Night Live,’’ when she played a high school teacher smitten with a student played by Bieber. “I don’t know whether I want to marry him or put him in a stroller and push him around the mall,’’ Fey’s character muses in a dreamy, if somewhat icky, voice-over.

A variety of cultural forces are turning women with crow’s feet into lovesick post-post-adolescents. For starters, the societal fixation with youth leads some people to believe they are still, in fact, young. If 40 is the new 20, what’s so wrong about lusting after “High School Musical’’ star Efron, even if Rolling Stone did call him a “poster boy for tweenyboppers’’?

The closer relationship between today’s mothers and daughters, in which both generations wear similar clothes, drink the same lattes, and collegially follow “American Idol’’ and “Glee,’’ is also a factor, experts say.

“There’s such a youth culture right now,’’ said Elisabeth Gruner, an associate professor of English at Virginia’s University of Richmond. “It’s just inescapable — this sense that it’s better to be young, and that you can and should stay young, and that the interests and concerns of the younger are everyone’s.’’

Literature and entertainment aimed at the young can have real appeal for some adults, she added.

“They recapture the way that adolescent crushes were all-consuming and had relatively light consequences,’’ Gruner said. “At 14 or 16, whether he talks to you or not feels like a huge life or death issue. When you are 50, you’ve been through some life or death issues, and you wish that whether he talked to you or not was the biggest issue in your life.’’

Kit Yarrow, a professor of psychology and marketing at Golden Gate University, points out that society places far fewer restrictions on relationships today when it comes to age, race, or gender. The rise of the “cougar,’’ (that is, older women dating younger men), gay marriage, multiracial families — all set the stage for a greater acceptance, even when it’s just a silly crush. “So, it’s OK for older women to drool openly.’’

Besides, it’s fun to re-experience teen love when you’re nearing middle age, said Lori Hosea, 36, a hairdresser from South Boston who considers Edward from “Twilight’’ perfect. “The books bring up all those feelings of new love, and how you get obsessed. You’re hoping he’ll call, you get a mani-pedi, you get waxed. That’s totally faded when you get to 40 and you’re married,’’ Hosea said. “You’re barely shaving your legs.’’

While the “Twilight’’ book and movie series have made her feel younger and more romantic toward her husband, there’s a downside, she admits. “When you’re reading the books you feel 18, and then you look in the mirror and you no longer look it. I find myself thinking I could do a face peel or something to turn back the clock.’’

But Hilary Missan, a Brookline mother of two with a major thing for Efron, 22, is definitely not suffering a disconnect between her actual age — late 40s — and the age she feels, which is somewhere between 18-25. “The feelings I have when I see him, it’s like I’m back in high school, so it seems normal.’’

Missan, a casting director at Boston Casting, recalled the first time she laid eyes on Efron, in “High School Musical.’’ “I was like, this guy is incredible. He is very handsome but that’s not what drew me to him. It’s his raw talent.’’ As an amateur singer and performer, Missan said, something in him “connects’’ to her.

It’s a connection her daughters wish didn’t exist. “It’s embarrassing,’’ her older girl, Amelia Elliot, 13, said. “She sometimes sees him in a movie, and she’s like, Oh, he looks so cute. But I should be saying that. I’m younger than her.’’

But maybe mom’s not to blame. It turns out she’s being targeted by media firms that know she’ll be watching shows with her daughter. “When you have a Millennial target’’ — someone born between 1980 and 2000 — “you necessarily have a secondary target of her mother,’’ said Jack MacKenzie, president of the Millennial Strategy Program at Frank N. Magid Associates, a consulting firm. “That’s the way it is today. Exploiting that is smart business.’’

Many mothers watch teen programs not because they’re interested in the shows — at least not at first — but as a way to bond with their daughters, said Debbie Mandel, author of “Addicted to Stress: A Woman’s 7-Step Program to Reclaim Joy and Spontaneity in Life.’’

Still, she offered a cautionary note: Some daughters will be bothered by the attempt at intimacy. “They are trying to break away. This is not mom’s territory, so why is she trespassing?’’

Perhaps no one is better positioned to see adult women’s interest in all things teen than Lana Veenker. As a casting director for the first “Twilight’’ film, she regularly hears from fans, 40 percent of whom are between 25 and 42. Some send gifts they hope will be passed along to their on-screen crushes.

“A lot of them were inspired to reevaluate their relationships with their husbands,’’ Veenker said. And then there are the women hoping to date the stars. Veenker reported that one older fan offered herself up to be Pattinson’s date to the Oscars. “I can get a dress by Thursday,’’ she wrote.