Decades after Boston's gay community first began to organize, memories remain sharp for those who lived the history. For the younger generation? Not so much. This year, marked by anniversaries, could change that. 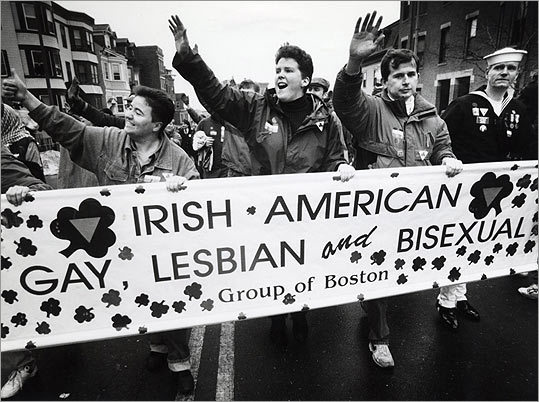 This group marched in 1993 despite efforts by the organizers of the St. Patrick's Day Parade to try to ban them from marching. In 1995 The U.S. Supreme Court ruled that organizers can ban the gay marchers. (Bill Greene/Globe Staff/File)
By Sam Allis Globe Staff / April 13, 2010

This year marks the 40th anniversary of Boston Pride, the organization that presents the annual parade held in recognition of Boston’s gay, lesbian, bisexual, and transgender communities. It’s also the 30th anniversary of the History Project, the definitive archival source documenting and preserving the city’s gay history.

The landscape has changed dramatically in the intervening years. Many in the younger generation do not face the same type of discrimination. Moreover, some younger gays and lesbians don’t embrace the activist rigor of their elders, who fought hard for their rights. Which has some feeling conflicted.

“They aren’t weighed down by a lot of baggage,’’ says John Ward, 67, an early gay activist in Boston who says some young people may look like slackers to the LGBT veterans. “They seem like ingrates, but they’re just living their lives.’’

“It’s a double-edged sword,’’ says Keri Aulita, 37, spokeswoman for Boston Pride. “On one hand, you’re happy to see them leading happy lives. On the other, you wish they had a better sense of history.’’

The theme of this year’s Boston Pride festivities, June 4-13, aims to address that point. Called “Riots to Rights: Celebrating 40 Years of Progress,’’ Pride will honor the Stonewall Riots in New York in 1969 that began the modern gay rights movement and remember turning points in local history.

Of course, you generalize at your peril about the younger generation. Plenty are deeply involved in gay rights, though some of the causes (gay marriage, the ending of “don’t ask, don’t tell’’ in the military) have changed over the years. They march in Washington and enlist in grass-roots organizations like Join the Impact. They mine the Internet for activities and social connections.

“The Net has somewhat replaced the role of rallies and marches,’’ says Mirian Manon, 27, who grew up in Brookline and now lives in Philadelphia with her partner. Her issue is gay marriage, which is currently illegal in Pennsylvania.

Still, that kind of involvement is far removed from the tumultuous, galvanizing years of activism here in Boston, memories of which remain sharp for many who lived through them.

Boston was ablaze in the 1960s and ’70s over rights of all kinds and against the Vietnam War. Activists marched for civil rights, women’s rights, gay rights, lesbian rights. In the late 1960s, young men burned draft cards at the Arlington Street Church. In 2004, fifty-five gay couples were married there in one day. The church rings its bells each year for the Gay Pride parade.

A lot of heat came out of 22 Bromfield St., home to a crazy salad of organizations that shared space through much of the 1970s into the early ’80s. At the center of it all was the Gay Community News, a leftist paper that published as a weekly from 1973 until 1982, when a fire gutted the building.

It was one of the first major gay and lesbian weeklies in the country. Also at the address was a radical gay publication called Fag Rag. The Boston Asian Gay Men and Lesbians met up there occasionally. The Glad Day Bookshop, one of Boston’s oldest gay and lesbian bookstores, was there, too.

“It was the center of the gay universe,’’ recalls Amy Hoffman, 57, about Gay Community News, where she worked.

Some activists, like Hoffman, arrived in Boston with a broader vision than that of GCN.

“I come from lesbian and gay liberation,’’ she says. “Gay rights are part of it but not all of it. Legal rights are important, but I also have worked for social justice and the transformation in human relations in terms of gender, class, and race.’’

AIDS hit Boston hard in the early 1980s, shattering gay life here. In response to the crisis, Larry Kessler founded the internationally known AIDS Action Committee of Massachusetts in 1983. The critical responder to the crisis was Fenway Health, the medical facility that moved first to help those with the disease and quickly became the beacon for AIDS treatment in New England.

Gone are the Punch Bowl and Saints and many of the gay bars of the past. Straight by day, Saints was a lesbian bar by night during much of the ’70s until it closed in 1980. “That was my favorite bar,’’ says Libby Bouvier, 58, a cofounder of the History Project. “The comfort level there was great.’’

One of the most consequential legal battles fought by the LGBT community began in 1978, when police arrested more than 100 men in a sting operation in the men’s rooms of the Boston Public Library after complaints from library security staff about gay sexual encounters occurring there. Ward defended the men and all the charges were either dismissed or defendants found not guilty.

This case led in large measure to the founding of Gay & Lesbian Advocates & Defenders in the basement of the Old West Church. GLAD was the pioneering group of lawyers who represent gay and lesbian interests in court, and won the groundbreaking case in which the Massachusetts Supreme Judicial Court ruled in 2003 that same-sex marriage was legal. The following year, the state became the first in the country to perform them.

For all the progress, the prejudice that plagued the gay community has never gone far away.

In Allston on Nov. 28, 1998, a transgender woman named Rita Hester was stabbed to death in her apartment. From that murder came the Transgender Day of Remembrance, celebrated on Nov. 20 each year around the world to honor transgender people killed by hatred and prejudice.

The history of the LGBT community over the past four decades is a rich and complicated story. And continues to be.

“I want to say everything is great and positive, but that’s not true,’’ says Bouvier. “Everything’s fine for certain people. If you’re white and middle class, life is OK. Other groups, like transgender, are still anonymous. Race and class are factors. Still, it’s certainly easier than it was in the ’70s.’’

Clarification: In this story Rita Hester was referred to as a transgender man. Hester identified as a woman; the correct phrasing should have been “transgender woman.’’

40 years of gay pride in Boston