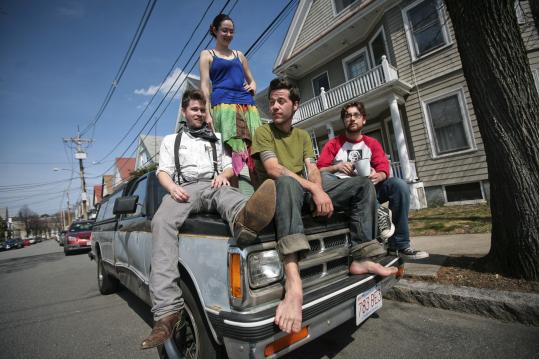 From left: Gene Atwood, Haley Filamond, Mariah Sharpe, and Mat Gibeault plan to spend a year or more living off the land on a parcel Atwood bought on eBay. (Aram Boghosian for The Boston Globe)
By Danielle Dreilinger Globe Correspondent / March 27, 2010

It’s 2010 and war, economic downturn, and a crummy job market wear on. It’s enough to make anyone feel the lure of the wild — of leading an independent, authentic life instead of “working full time at menial jobs for low pay and drinking and going to parties to make us feel like we’re having fun,’’ as 25-year-old Mat “Chopper’’ Gibeault of Belmont put it.

Early next week, Gibeault and three friends will put into action the most outlandish escape fantasy short of flying to the moon: They’re driving 2,300 miles to a 5.152-acre patch of dirt in the west Texas borderlands, 18 miles from the nearest town, to live off the land for at least a year. They call it “Texarrakis,’’ a reference to the desert planet in “Dune.’’

In Texarrakis’s founding myth, charismatic ringleader Gene Atwood, 28, of Watertown bought the land off in 2003 for $550 plus $100 in fees. He put it on his mom’s credit card.

Now, Atwood, Gibeault, Mariah Sharpe, 25, of Northampton, and Haley Filamond, 21, are trading subways for silence, the Milky Way in JP for the one in the night sky. According to Census data, Texas’s Culberson County has less than one person for each of its 3,812 square miles.

But you have to unload the old life to start the new, especially if the new life requires water receptacles and a windmill. So the foursome set up a trading post in Somerville last Saturday to sell the detritus of civilization — a “Braveheart’’ DVD, a croquet set, controllers, ski boots. Atwood presided over the proceedings in a cowboy get-up.

“It just seems so logical to us for some reason,’’ said Filamond, Atwood’s girlfriend, wearing a tie-dyed silk skirt. “Selling our time away by the hour . . . is just very draining.’’ Moving, they believe, means time for creative projects. She’s a fiber artist; Gibeault and Atwood write.

Don’t call them slackers, though. They like good hard work. They may need to map the land’s boundaries: They couldn’t get the only surveyor in Culberson County, someone called Smiley, on the phone, Filamond said.

Their extensive plan, detailed on texarrakis.com, includes clearing brush and building a water capture system, raised garden beds, and some kind of latrine. A wind generator will power lights, electronics, and cellphones.

With technology, the four souls won’t be too isolated.

“We’ll be posting videos to YouTube,’’ Filamond said. A motley crew of friends who ate bagels at the yard sale and hula-hooped in a colorful variety of vintage, geek, and repurposed finery planned to visit. Many traveled down in 2008 to check out the site.

In their eyes, the scheme wasn’t all that bizarre.

“It’s been leading up to something like this,’’ said Peter Berard, 24, now of Brooklyn. Even as a teenager, Atwood “was talking about going out and forming his own community.’’

Atwood’s mother, Martha Fay of Roslindale, 60, applauds the venture. Although she admitted to a little empty-nest syndrome and a few “mother worries,’’ “my main feeling is one of pride,’’ she said. “You want to see your kids be themselves.’’

As for safety, “He’s going into this having researched it to death,’’ Fay said. “He knows more about living in the desert than I do, and I’ve lived in the desert.’’ She plans to visit in June.

The urge to chuck it all and start over, scratching out a life on the land, is woven into the fabric of this country, starting with the Pilgrims and followed by waves of immigrants and pioneers who pushed west till they could go no farther. Opportunities to blaze trails are harder to come by these days, but many still dream of abandoning modern life for something more rugged. Of course, the realities are often none too romantic, but many people who hear of the Texas plan can’t help but see it that way.

“I definitely sometimes want to get away,’’ said Kevin Guiney, 40, of Arlington. Still, getting away for him means a Maine lake “within driving distance.’’

Tag sale visitor Seth Rosen, 27, of Somerville has lived in California, worked on a cruise ship, and gone to the desert festival Burning Man. “I feel like people have needs that normal society isn’t fulfilling,’’ he said.

Even so, Rosen was taken aback to hear the foursome was moving to a place that remote. “I’m surprised they’re not bringing the croquet set,’’ he said. “It seems like that would be useful.’’

Some of the settlers-to-be sound more light-hearted than others. Sharpe approached the move with ease. He was psyched to ditch “all my childhood knickknacks,’’ he said, with a puckish grin, picking dirt off his bare toes.

The Converse-wearing Gibeault, however, had some angst over selling his boxes of neatly packaged comics. “I got over my deep depression over it a couple of hours ago,’’ he half-joked, hollow-eyed from lack of sleep. His girlfriend is staying in Somerville.

Regardless, the need to escape drove Gibeault. If he didn’t go, he’d become “a misanthropic weirdo,’’ he said. Besides, the land is glorious. “You have no idea.’’

In the end, the group made $1,300 from the tag sale. Most of it came from Gibeault’s comics.