Out of the box

Few museums can trace their beginnings to some hurried sketches made on the back on a pizza box. Then again, few museums have grown from concept to reality as quickly as Design Museum Boston.

It began two years ago when Bose Corp. product designer Sam Aquillano and Philips designer Derek Cascio were discussing ways to boost the profile of the Massachusetts design community. The state is a hotbed of product design, architecture, urban planning, interior design, video game animation, graphic design, and apparel, but Aquillano and Cascio realized that most people outside the design community have no idea that everything from the Swiffer to the video game Rock Band originated here.

“We thought we needed to get a building to house our museum,’’ Aquillano says. “We realized pretty quickly that we wouldn’t be able to get a building because it would take years to raise the kind of money we would need, and this isn’t exactly a great time to be hitting people up for money.’’

It is a good time, however, to be in the market for empty storefronts. The two 27-year-old designers scuttled their dreams of a brick-and-mortar museum and took another path: Create a nomadic museum that exists in empty storefronts around the state and bring design to retail areas.

Design Museum Boston won’t be a traditional institution in one space but a museum scattered through multiple retail locations. This fall the museum will hold its first exhibition in empty storefronts in Downtown Crossing, focusing on the rich history of design in Massachusetts. As the museum grows, the pair envision taking over empty stores in malls, plus creating a large online component and developing an iPhone app that will guide visitors to exhibitions.

“We went into this saying, Let’s just try it and see what happens. The wheels just started turning really fast,’’ Cascio says.

What happened since that evening of pizza is that the two men found that Massachusetts is apparently very ready for a design museum. While donations haven’t been pouring in (the nonprofit group has raised about $2,500, enough to maintain an online presence), Aquillano and Cascio have found strong support elsewhere - from state officials to the local design community.

“We had wanted to do it ourselves,’’ says Beate Becker, founding director of the Design Industry Group of Massachusetts. “But this is ideal because Sam and Derek have a tremendous amount of energy for this project, and they’ve made it a reality in an incredibly short amount of time.’’

Becker is seeing a boom in the creative energy of Boston’s design community. In addition to Design Museum Boston, she points to a recent design competition called SHIFTboston, in which designers were challenged to come up with ideas to “enhance and electrify’’ the city. Coincidentally there are plans in the works for a second design museum in Boston. The Boston Society of Architects announced it is planning its own museum, part of its new location at Russia Wharf in Fort Point Channel. The BSA entered into a nonbinding agreement for the first two floors of a building, which would also include offices and meeting spaces for the organization. If its plan comes to fruition, it would occupy the space in 2011.

There are several design museums around the world, including the Cooper-Hewitt in New York, Museum of Design Atlanta, Design Museum in London, and Red Dot museum in Germany. But Aquillano and Cascio see Design Museum Boston as a venue that goes beyond displaying products in a traditional museum format.

“We’ve been to all of them,’’ Aquillano says of the museums. “And this is where Design Museum Boston will differ. There is no context around the objects shown in those museums. We want to tell the story behind the objects that people own.’’

Michael DiTullo, a board member of Design Museum Boston and design director of Converse One Star footwear, says the new museum will be one of the few that is founded by designers.

“When Sam and Derek decided to donate so much of their free time to this cause, I definitely wanted to become involved,’’ DiTullo says. “I saw it as a way to get our voice to the public. They don’t always have an understanding of everything that design impacts. Everything around us in this man-made environment is touched by a designer.’’

The depressed economy has actually helped to accelerate the project. In addition to a large number of empty storefronts available for design displays, unemployed and underemployed designers have had additional time on their hands to help. Some have helped create the museum’s website (www.designingamuseum.org), which is acting as a forum for soliciting ideas on how to proceed with the project.

Jason S. Schupbach, the state’s director of creative economy, envisions that the museum also will help educate other businesses about the designers who work here. “It will really be an incredible opportunity for the 200,000 people who go through Downtown Crossing every day to see the incredible minds that are here,’’ Schupbach says. “Not only does the general public need to know about the quality of design that happens here, but the business community does as well.’’

Design Museum Boston has been in the planning stages, but Aquillano and Cascio will take their idea to the public next month with a party and fund-raiser March 16. Meanwhile, the two men, who also teach at Wentworth Institute of Technology, will continue to build buzz around their project.

“It doesn’t take much to pitch this to a designer and for them to get excited about it,’’ Aquillano says. “You can’t even finish telling them about the project before they’re asking, ‘What can I do to help?’ ’’ 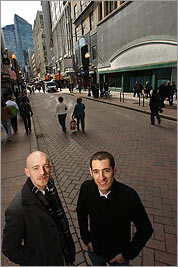