She jumped - feet first - into yoga, and still hasn’t come down 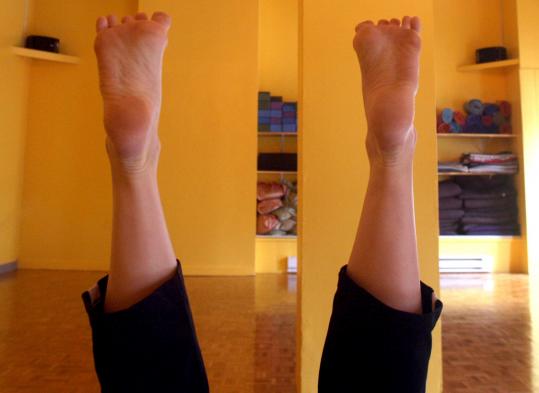 Call it heresy, ignorance, or just plain laziness: I had never taken a single yoga class until a few weeks ago. It wasn’t for lack of encouragement by mat-toting, mind/body-balancing friends. It wasn’t an aversion to exercise: I run, do crunches on occasion, and thought for sure I knew how to breathe properly (just in-out, right?). Still, I was curious. So in the spirit of trying new things, I canvassed the local yoga scene as a complete and unapologetic newbie.

But where to start? Rebecca Pacheco, yoga instructor for 10 years and the Boston-based voice behind the yoga and wellness blog Om Gal, champions Boston’s scene for its variety of styles and array of strong teachers. She encourages beginners to be patient and persistent, trying a cross-section of classes to see what fits best.

“Not everyone needs or wants to do hot yoga. Not everyone wants to do restorative, relaxing yoga,’’ Pacheco says. “Because of demand and level of interest, studios are able to offer untraditional, creative stuff,’’ enabling the curious to sample with gusto, from punk-rock yoga to pre-natal yoga.

I dipped my toe in the superheated waters of Baptiste Power Vinyasa Yoga Institute in Porter Square, where first-time students can attend unlimited classes for a week. The 90-minute Monday session I dropped into was open to all levels, a solid introduction to Baron Baptiste’s signature sequence of poses performed in a studio heated to over 90 degrees (warm muscles keep you flexible). It’s one of the more rigorous practices, with a graduated sequence of movements from mat-slithering sun salutations to one-footed “tree’’ or twisty “eagle’’ stances; the sweaty succession was punctuated by exhalations and moans. With minimal expectation and maximum hydration, I did my best to keep up with the poses, sweating and occasionally bursting into laughter amid the intensity. That was awkward. But the main thing was, I survived. And even felt a little more awesome than before. Definitely warm. Maybe even fuzzy.

Shanna Slank, studio manager and supervisor at Baptiste, recalls her first foray into yoga two years ago, fueled by the energy of a New Year’s resolution (and a hangover, it must be confessed). With subsequent visits to the studio, the classes soon took on an almost addictive, cleansing quality. “The first thing about the practice that will grab you is the physical intensity,’’ Slank says. “But then you feel like a million dollars for the four hours after it, and for the four days after it. It sort of melts into a mental or emotional shift: Oh, I’m a lot calmer. I’m not feeling really freaked out about things now.’’

My next stop: a basics class at Be in Union yoga studio, a recent addition to my neighborhood. With even just the single Baptiste class under my belt, I felt considerably less self-conscious, breathing and closing my eyes and letting go of the world beyond - even with a snowstorm blustering outside the studio’s enormous glass windows. A half-dozen students and I slinked through a moderately paced Vinyasa series, doing different variants of warrior poses and back-bendy bridges in the heated studio. (The studio’s heat was not as extreme as at Baptiste, but definitely cranked up enough to keep students sweaty and limber.)

Though the temptation to peek at everyone was great (I attribute it to a mix of curiosity and competition), I was encouraged instead to focus inward, to trust my body was doing the right thing and that the teacher would gently intervene if a pose required adjustment. No laughing this time around. Maybe I even “om’’-ed once or twice.

“The biggest challenge was my own mind,’’ admits Blanca Alcaraz, Somerville firefighter and owner of Be in Union, who resisted the idea of yoga until it took personal resonance after 9/11. She’d mistakenly imagined the yoga scene to be awash with would-be contortionists in legwarmers and snappy outfits. Alcaraz stresses for any student that “the greatest teacher is yourself,’’ by listening to the body and being attuned to all physical sensations. “I’d much rather have a raw novice that’s full of emotion and trusting that they’re doing the right thing, than some guru,’’ reassures Alcaraz. “There’s no yoga police out there!’’

Thank goodness. It would be a shame to have my license revoked.

I’ll admit I wanted to try Forrest yoga after a friend had mentioned it, if only because of the coolness factor of saying, “I just came back from the Forrest.’’ Yet after attending a class at Back Bay Yoga, I realized Forrest was more than just a name. Designed by Ana Forrest, the style’s philosophical pillars “breath, strength, integrity, spirit’’ are expressed through a focus on the body’s core. Performed in a slightly heated room, the contemplative, intensive poses are sustained, some for 10 deep breaths, other for minutes at a time.

There was a lot to take in. I tried inversions for the first time (ergo, holding oneself upside down) and was pleased to experience the more methodical, more meditative, yet highly intense rhythms of Forrest yoga. The class, about a dozen strong the morning I visited, exuded a sense of camaraderie, as students silently gave each other space and time to delve inward. With the teacher’s guidance, we made each pose our own. Still, while some poses were physically exhausting, my mind struggled as much as, if not more than, my body. The whole experience felt escapist from the world, from tension, from ourselves in a strangely fantastic way.

“Every style has its own strengths and benefits,’’ says Lynne Begier, owner of Back Bay Yoga, where first-timers can attend an unlimited number of classes for two weeks for $25, to try as many styles as possible. “Some people like chocolate, some people like vanilla, but it’s all ice cream,’’ says Begier, whose studio offers everything from core Vinyasa to meditation. “We want to help people find what fits their personality, their level of strength, and the condition of their body.’’

Begier also mentions the importance of arriving early to class. She jokes that yoga’s not like a movie theater, where people trickle in during the trailers after hanging out at the popcorn stand. “The beginning part is the most important. Especially if you’re new, get there 15 minutes early so that you can acclimate to the studio. It’s an opportunity to take some time out for yourself; you don’t want to rush that.’’

I’m still in the early stages of exploration, but the most interesting thing I’ve discovered is the energy among students. In class, it’s as though we’re floating in a common ocean on our respective rafts, working our lungs and muscles and psyches on a highly communal level. It feels - how do you say it? - epic.