Not so black & white

As the president gets ready to vacation on Martha’s Vineyard, African-American families say it’s a place they’ve loved for years, and where race isn’t an issue 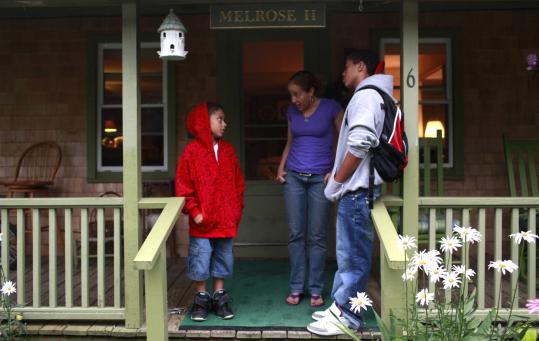 MAISIE CROW FOR THE BOSTON GLOBEGretchen Mercer with her sons Brandon (left) and Jason on the porch of her family’s home in Oak Bluffs. The home has been in her family for generations. (Maisie Crow for The Boston Globe)
By Irene Sege Globe Staff / August 15, 2009

OAK BLUFFS - Gail Rice was jogging near her summer home in East Chop, on the northern tip of Martha’s Vineyard, a few years ago when she passed a tall, thin African-American man gazing at the water. He looked familiar. Isn’t that the politician, she wondered, who had electrified the Democratic National Convention in 2004? It was, but he hardly stood out on an island that is a favored getaway for some of the nation’s most notable and accomplished African-Americans.

Nobody, of course, will have any problem recognizing Barack Obama when he returns to the island later this month. But this time, they can just look for his security detail, as it’s a pretty safe bet that if the president of the United States, who will be renting a secluded up-island retreat in Chilmark, is standing beside a public road, he won’t be standing alone.

If Obama’s historic election marks an evolution of race relations in this country, then so, too, albeit on a smaller scale, does that moment on East Chop Drive. Rice and her husband, who are both African-American, own a stately house on an elegant stretch of waterfront road in an area of town once frosty, if not closed, to African-American buyers. When Harvard Law School Professor Lani Guinier’s family purchased a nearby home in 1972, her white mother conducted the transaction; the seller didn’t meet her black father until the family moved in.

Today, the island, like society itself, is more open and more people of color have the means to move beyond the cottage colonies that formed the community’s first foothold here. Yet Oak Bluffs remains the heart of African-American life on Martha’s Vineyard. This is where filmmaker Spike Lee, Harvard professor Henry Louis Gates, former US Attorney Wayne Budd, and Obama friend and advisor Valerie Jarrett vacation. This is where the striving, as well as the already arrived, come to unwind in the comfort and company of the like-situated. This is where generations return year after year for reunions of family and old friends. People run into each other along Circuit Avenue or on the post office plaza or at the so-called “Inkwell’’ beach beside the road to Edgartown.

“Oak Bluffs,’’ says Guinier, “is people you’ve grown up with, people who’ve known you, if not all your life then most of your life. They know the good, the bad, and the ugly. What you’re asking me to speak to is the sheer pleasure and joy of being together with people who also have a set of experiences or appreciation for experiences that you’ve had, that aren’t precisely the same but have enough in common that they recognize themselves in your experience. Frankly, it can be a little lonely in Boston.’’

When New York magazine recently suggested, in a story titled “Black and White on Martha’s Vineyard,’’ a snobbishness to the hobnobbing here, the local Vineyard Gazette ran a front-page article quoting residents and vacationers protesting the characterization. When journalist Charlayne Hunter-Gault and professor Gates hold their annual forum on race in Edgartown on Aug. 20, the topic will be “Achieving Equality in the Age of Obama,’’ the audience is likely to be mixed, and Gates’s recent arrest at his Cambridge home could well animate the discussion.

“Martha’s Vineyard has been a place where African-Americans have been able to come and relax and be acknowledged for all their accomplishments. For me, that’s wonderful,’’ says Rice, 46, an orthodontist-turned-stay-at-home-mom from Manhattan who vacationed in Oak Bluffs as a girl. “It’s a very small-knit community. Obama went to Columbia. A lot of people go to Ivy League schools. Travel in the same circles. Why wouldn’t he come here?’’

The African-American summer community traces its origins to the late 19th century when workers in the island’s resort industry began purchasing property in Oak Bluffs. In 1903, former slave Charles Shearer and his wife, Henrietta, bought a house in the Highlands, at the edge of East Chop, overlooking the Baptist Temple Park where revival meetings were held. Henrietta ran a laundry, and in 1912 the couple opened an inn, Shearer Cottage, that catered to well-to-do black visitors from Harlem and elsewhere, including the Rev. Adam Clayton Powell Sr. and his son the future congressman, singer Ethel Waters, actor Paul Robeson, and beauty industry millionaire Madame C.J. Walker. Next week Shearer Cottage hosts an Elderhostel forum on Obama featuring former Atlanta mayor Andrew Young.

Gretchen Tucker-Underwood, 65, grew up in Roxbury, raised her family in Wellesley, and summered in Oak Bluffs. Since retiring from her job as a high school dean two years ago, she lives year-round with her mother in the house her great-aunt bought in the 1940s in one of the few island areas open at the time to African-Americans. In 1996, Underwood’s father, the late Judge Herbert Tucker, became one of the first African-Americans admitted to the East Chop Beach Club.

Four generations of Tuckers gathered on their front porch one recent morning. Mary Tucker, 91, sat in a rocking chair and her daughter Gwendolyn Wharton, 68, occupied another chair. Underwood’s daughter, Gretchen Mercer, 45, leaned against the railing as her two sons left for an outing. The 1 1/2-acre lot is dotted with flower gardens, and every August the family holds a tennis tournament on their court. The neighboring houses were once all owned by African-Americans; lately, white families have bought some.

“I lived in Wellesley,’’ Underwood says. “I ran for political office in Wellesley and won. I had some people I cared for in Wellesley. But that was not the place I looked to for any kind of social life.’’

Mercer and many of her peers never had the close-knit life their parents had enjoyed in city neighborhoods. “In Wellesley in the late ’70s and ’80s, there was no such thing as interracial dating. I never had that dating experience until I came here to the Vineyard and met other kids going through the same thing as me,’’ says Mercer, a publicist who now lives in Milton. “We came here from affluent and predominantly white communities and said, ‘Look at all the black kids.’ ’’

A generation younger, 18-year-old Lauren Wilkins of Albany, relaxing at the Inkwell beach on her family’s annual two-week vacation, expresses the same sentiment. “Back home,’’ she says, “you don’t see a lot of black middle class.’’

Former US attorney Wayne Budd, now senior counsel at Goodwin Procter, met his wife, Jacqueline, president of Dress for Success, through mutual friends in Oak Bluffs. They started dating several years later, and two days after they wed in 1983 they and another couple bought a small house here. Now the Budds own a sunny shingled home and adjacent guesthouse in the Highlands, opposite the harbor. “Everybody wants to make an issue out of the racial part,’’ says Jacqueline Budd, 65, who has been coming here since she was 11. “What seems to get lost in this is it is a wonderful place.’’

Hunter-Gault, 67, who now lives here half the year, thought she’d discovered what she calls “this paradise for black people’’ when she first visited in 1970. “Even though the civil rights movement opened up opportunities, when you go on vacation you don’t want to fight the civil rights movement,’’ she recalls. “It was a place that was very warm and hospitable. You didn’t think about being black.’’