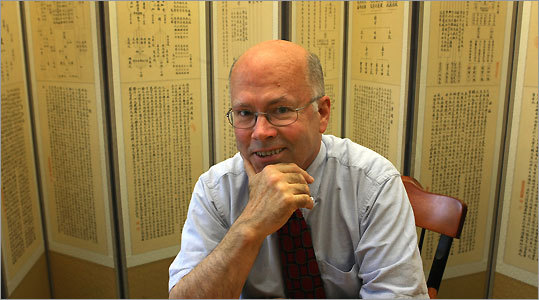 CAMBRIDGE - The class on writing Asian poetry that Professor David McCann teaches at Harvard includes units on Chinese quatrains, Korean sijo, and Japanese haiku, the last of which is so well-known that McCann’s students had haiku days in middle school. Why, McCann wondered, couldn’t the three-line Korean sijo that he loves enjoy the same widespread recognition as the three-line, 17-syllable haiku?

With that, McCann, a poet and professor of Korean literature, embarked on a mission. He is the founder and chief marketing officer of a campaign to popularize the sijo (pronounced SHEE-jo), a traditional poem of 43 to 45 syllables whose third line contains a twist on the theme developed in the first two.

This spring McCann hosted a sijo festival at Harvard - the first anywhere, he believes, to feature both Korean and English sijo. A sijo contest for middle and high school students which McCann judges attracted 450 entries from two dozen states this year, up from 160 in its 2008 inaugural year. Bo-Leaf Books just published McCann’s “Urban Temple: Sijo, Twisted & Straight,’’ one of the first anthologies of sijo written in English.

“Students who have a haiku day, when they grow up and see a Japanese novel, they’ll be interested,’’ McCann says. “There could also be a sijo day. Children might find sijo something they can try, then one day see a Korean novel translated and say, ‘I can read it.’ ’’

The haiku whose success McCann and others seek to emulate gained notice in the decades after World War II as Americans grew curious about everything Japanese, from the tea ceremony to Zen Buddhism. “Haiku,’’ says McCann, “got to be part of American notions of what Asian was.’’ Jack Kerouac, who became an icon of the Beat Generation, wrote haiku.

Now, McCann posits, Korea’s time has come. A so-called “Korean Wave’’ of exported television shows, movies, and musicians is attracting attention across Asia and beyond. “Winter Sonata’’ has been a TV hit around Asia, pop singer Rain has played Madison Square Garden, and Park Chan-wook’s “Old Boy’’ won the Grand Prix at the Cannes Film Festival in 2004.

With its three lines, sijo resembles haiku, but the sijo poet has more room to develop a theme, narrative, or image before twisting and resolving it in the final line. Each line of 14 or 15 syllables consists of a string of four shorter phrases of three, four, or five syllables apiece.

“Sijo is much more flexible than haiku,’’ says Heinz Insu Fenkl, who grew up in Korea and teaches creative writing and Asian literature at the State University of New York, New Paltz. “If you have 15 syllables per line, that’s much more than the haiku. What it allows for is something haiku can’t do, which is the formation of narrative inside the poem. You can express complicated things. At the same time, they sound very natural.’’

Originally meant to be sung, one of the earliest known sijo is a 14th-century verse:

The spring breeze melted snow on the hills then quickly disappeared.

And melt away the aging frost forming now about my ears.

Modern Korean poets write sijo intending them to be read in print and sometimes link sijo as stanzas in a longer poem. Kim Dae Jung, who went on to become president of South Korea and in 2000 won the Nobel Peace Prize, wrote sijo while imprisoned in the 1980s.

“Sijo goes right through the spectrum of Korean culture,’’ says Fenkl, whose mother was born in Korea. “Even people working in the field will take a break and tap on their lunch boxes and recite sijo. When you buy old furniture, the inside of the cabinets would be papered. The paper was often sijo. In the ’60s a lot of the popular tunes were expansions of sijo structures.’’

McCann carries the imprimatur of Harvard, but he is not the first American to try to do for sijo what Kerouac did for haiku. In 1992 a Florida poet named Larry Gross found sijo translations in a poetry journal published in India, and in 1996 he and Canadian poet Elizabeth St. Jacques founded Sijo West, a journal that printed about six issues. In 1995 Maplebud Press published “Around the Tree of Light,’’ a volume of St. Jacques’s sijo written in English.

Gross, 81, a retired English professor who now hosts an online sijo site, is pleased to hear of McCann’s campaign. “That would be great,’’ Gross says. “That was my dream.’’

McCann’s fascination with Korea began in 1966 when he joined the Peace Corps instead of the Army after graduating from Amherst College. “My plans were to go into the Rangers and get parachuted behind the front lines in Vietnam and see what happened,’’ recalls McCann, 64. “A classmate asked me if I ever heard of the Peace Corps. I was invited to train for the first program in Korea. The training was in Hawaii. That sounded good to me.’’

Soon McCann, who studied Renaissance history in college, was teaching English at an agricultural high school in Andong. One day he noticed an unusual volume in a local bookstore. Its cover was red, a taboo color in anti-communist South Korea, and it contained English translations of Korean poetry. Since then McCann has translated sijo and other Korean poetry himself.

Two years ago, sitting at his favorite restaurant in Harvard Square, Charlie’s Kitchen, McCann wrote his first sijo in English on a napkin:

All through lunch, from my table

I keep an eye on your disputes,

green lobsters in the bubbling

tank by the restaurant door.

Slights, fights, bites - Whatever the cause,

make peace and flee, escape with me!

He’s been writing sijo ever since for the Every Other Thursday poetry workshop, and a year ago his fellow poets started composing sijo, too. He and Fenkl plan to create an online journal for sijo in English.

“The English language begins to sort itself out in the sijo in interesting ways. There are patterns of sound that the sijo brings out in the language. The way it twists, it’s almost as if I’m seeing it happen on the page,’’ McCann says. “Because it’s short and focused it gets you away from the over self-regard of some poetry. You’re encouraged to be out looking at things.’’

Last year Fenkl, aware of McCann’s new cause, suggested a school-age sijo contest to the Illinois-based Sejong Cultural Society, which was founded in 2004 to promote Korean culture. The society sent 5,000 fliers to English teachers and principals in 20 states last year; this year it sent 20,000.

“This is something Korean culture can offer to Americans,’’ says Ho Kim, president of the society. “At the same time Korean-Americans benefit.’’

Sixty sophomores at Trinity High School in Manchester, N.H., studied sijo this year, and a half dozen entered the contest. In Atlanta, teachers at the Marist School taught sijo to their 12th-grade world literature classes, and all 120 students submitted poems to Sejong.

“The sijo was really fun and different. With haiku, they would have gone, ‘Oh, another haiku,’ ’’ says Tracy Kaminer, a teacher at Marist. “I think sijo is an elegant form of poetry.’’