On top of the world

Thanks to Sporcle, young people are learning about geography, and other subjects 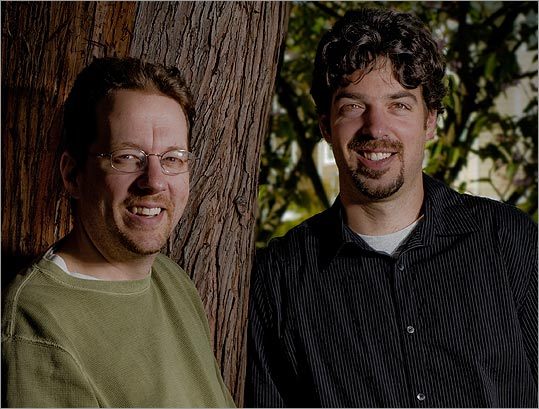 Matt Ramme (right), who created Sporcle.com, and Derek Pharr, the site's product manager. ''College kids have really taken to it. It's nice there's this thirst for knowledge out there,'' says Ramme. (Timothy Kurkoski for The Boston Globe)
By Don Aucoin Globe Staff / June 16, 2009
Text size – +

Megan Goodrich loves few things more than geography, but even she had to admit that the weekly meetings of the Geography Enthusiasts Club at Bridgewater State College were getting kind of dull.

Goodrich, 20, a junior from Sandwich, went hunting online for a trivia contest and happened upon Sporcle.com. She was soon hooked by the inscrutably named website, with its quiz-show-style challenges: Can you name all the countries in the world in 15 minutes? How many countries have "stan" as a suffix? Which countries share the longest borders? Which country consumes more beer, per capita, than any other? Can you name all 37 countries that contain the letters X, Y, or Z?

Soon Goodrich was Sporcling constantly - yes, devotees use it as a verb, a la Google - and incorporating the site into the geography club's meetings, where members would shout out answers in a heated competition.

"You want to get the answer right," Goodrich says. "You want that validation." She says she has become addicted to the site. "Sometimes Sporcle is my downfall when it comes to my other work."

She may have a lot of company. Sporcle is the latest rage on college campuses, to the admitted surprise of its founder, Matt Ramme of Seattle, who says he expected the site to appeal primarily to older users when he launched it two years ago. It has increased its audience by 47 percent in the past three months, according to Alexa Internet Inc., a subsidiary of that monitors Web traffic.

"We have seen a huge growth on college campuses," says Ramme, 33. "College kids have really taken to it. It's nice there's this thirst for knowledge out there."

As thousands more college graduates stream into the "real world" this month and enter the competition for jobs in a global economy, a deeper understanding of the world is obviously a useful tool. Yet for most of them, their last geography class was in seventh grade. There may be an element of generational catch-up in the popularity among young people of sites like Sporcle, along with the huge success of such tools as Google Maps and Google Earth.

Catherine Chalpin, 22, of Exeter, N.H., who graduated from Simmons College this month, sees the knowledge she gleans from Sporcle as a defense against "the way a lot of foreign countries see us, as 'Oh, Americans don't feel the need to learn anything about other countries.' "

Since Chalpin discovered Sporcle last year, she has gone on the site twice a day. Sporcle has prompted her to dive into geography with an avidity she has not felt since she was New Hampshire state geography bee champion in middle school. Chalpin has come to believe that Web-based learning games like Sporcle might help her generation dispel the stereotype of the parochial, geographically illiterate "ugly American."

"There was the generation of the TV quiz shows, and now, since we're all so wired, and media has become less like a pole and more like a blanket, so spread out, it's a way for kids to play games, have fun, and get a little knowledge out of it," she says.

In addition to geography, the site presents brain teasers in such categories as sports, movies, TV shows, and Shakespeare plays, along with word games that, for example, challenge the user to name phrases that contain the word "great" (Great Depression, Great Plains, "The Great Gatsby"). But much of the buzz around Sporcle focuses on its geography section.

Conor O'Shea discovered Sporcle in early 2008, when he was a senior at Boston University. "The addiction hasn't ceased since then," admits O'Shea, 23, of Somerville, adding that he goes on the site two or three times a day. "It's a lot more fun than shooting a cartoon kitty out of a cannon or updating my Facebook status. It's a less guilt-inducing time-waster."

"I like to test my knowledge," he adds. "Most of the time I'm pretty humbled, because the quizzes are pretty hard."

If it's any consolation, Ramme, the founder of Sporcle, also finds the quizzes pretty hard.

In fact, Sporcle sprang from Ramme's own sense of inadequacy. A graduate of Carnegie-Mellon University, where he studied computer science, Ramme got fed up with watching "Jeopardy" and not knowing, say, the capital of Idaho or who the 14th president was. At first, he took an old-school approach to the problem: He used flash cards to memorize places and dates and events. That got old in a hurry. He went looking on the Internet for a solution but found nothing.

"I thought, if I can't find anything that meets my needs, I'll fill it myself," recalls Ramme, who launched Sporcle in July 2007. As for the name, he says, "I always liked the idea of an oracle, an all-knowing being. I was playing around with that idea, just brainstorming. Sporcle just came to me in a moment of inspiration."

In its broadest sense, the study of geography encompasses elements of economics, political science, history, sociology, international relations, and environmental science. Deborah Martin, an assistant professor of geography at Clark University, says geography's emphasis on "space, place, and scale" can help students understand everything from border conflicts to economic development to global warming.

On that score, academics offer mixed reviews of Sporcle.

"Maybe it promotes a curiosity about the world, but I think it helps to caricature geography, because it makes it a trivia game," contends Joseph Nevin, an associate professor of geography at Vassar College. In Nevin's view, Sporcle does not convey a strong geographic understanding of the world that encompasses "how people make their world, the places that are important to them, the connections, changes, processes, and differences," but instead falls back on the old conception of geography as being about "the memorization of state capitals and rivers and mountain ranges."

But James Hayes-Bohanan, an associate professor of geography at Bridgewater State, says Sporcle does attempt "a higher level of spatial thinking" by, for instance, following a question about the capitals of Africa with a question about the adjacent countries on the continent. "It piques curiosity," says Hayes-Bohanan. "Once you see the kinds of phenomena they quiz on, I hope that would inspire people to do some reading."

Ramme says Sporcle is not intended to be the last word on geography or any other subject. His only intention, he says, was to deliver information in an entertaining way. (Sporcle product manager Derek Pharr calls it "tricking people into learning.")

"I would argue that Sporcle goes beyond rote memorization," Ramme says. "When we ask what are the leading coffee-producing countries, you have to think: OK, they have to be big enough to export a lot of coffee, they have to be warm, so they're probably near the equator. You're having to think about the world in a different way."

So has Ramme been able to ace "Jeopardy" since he launched Sporcle? "I definitely do better," he says. "But part of the downside with the site's popularity and needing to build the contests is that I probably don't use Sporcle as much as some users do. You're always focused on the creation of new content."