The model and the kung fu master 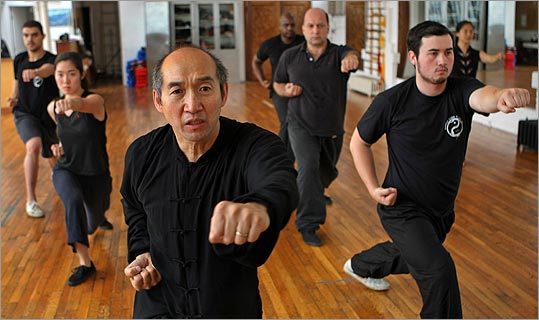 In a sunny fourth-floor dojo on Boylston Street, student and master move in unison. Together, they shift their weight into a catlike crouch, then turn, swinging their wooden staffs in a broad circle. They plant their feet wide, then turn. Their staffs strike the air.

The student is Gisele Bundchen, who happens to be the world's most highly paid supermodel, and, oh yes, wife of Patriots QB Tom Brady. Lots of people know her name.

The sifu, or teacher, is Yao Li. Not so many know his.

"He could support himself with five really well-known students," said longtime friend and graphic designer Bruce Sanders, 58, of Westford. "But I don't think that would satisfy him."

Instead, Li keeps his profile low and his Back Bay kung-fu studio, or dojo, open to all.

He's never wanted anything else, he says.

At 16, Li was a recent Taiwanese immigrant with little English, struggling to adjust to a new culture. David Carradine was doing kung fu on TV, and like many other American teenagers, Li wanted to learn those moves.

He wound up in Chan Pui's martial arts studio, in an old brick warehouse at North Station. Pui was a master of the Northern Praying Mantis style of kung fu, the last disciple in a direct line of teachers going back to the Wah Lum Temple monks in Shantung, China. Li walked in the door and saw an Irish-American girl from Roxbury, about his age, performing moves he'd never seen before.

Her name was Dorri; they married nine years later.

In Pui's school Li thrived. He caught up with Dorri, and by the time he was 19 he was helping to teach classes. At 24, he bought the school from Pui. Pui looked on him as a disciple, someone to carry on the Wah Lum tradition.

But Li was realizing that he wanted to learn other styles and integrate them into his teaching.

"I wanted the artistic freedom," he said. "Otherwise I would have been like the son who never left home."

For Pui, Li said, that was unthinkable. The two men had a difficult falling out. "It was like a divorce," Li said. Out of respect, Li promised not to teach Wah Lum style.

Li had to learn a new style to teach, so went to Beijing and trained in wushu - a modern, dramatic style of kung fu that incorporates large movements and low stances. Later, he learned tai chi as well.

"It was like a dream come true," he said. "It was challenging, different. That was what I wanted."

Returning to Boston, Li continued to teach a mixed wushu style. His dojo was diverse, full of students of all backgrounds and skill levels. In 1982, one of his students, named Nancy, suggested that her husband come to train. Her husband was Robert Parish, at that time at the top of his game with the Celtics.

Li was a little intimidated. "It's not every day that you train a Celtics legend," he said.

When he saw Parish, he was even more concerned. The man was "a true seven-footer," Li recalled. "His reach was incredible. He could reach me from across the room . . . how do you train someone that is so tall?"

For someone like Parish, Li decided, the southern style was best.

"He's so tall, you actually have to make him more compact," he recalled.

Parish remained a student for a decade, and passed Li's name along to his teammates. Other Celtics came around to train, and word of the dojo began to spread in a small, high-powered circle.

Over the next few years, Li's student base expanded. He taught Mamet. "He was intense," Li recalls. "There's no holding back - he slugs."

He taught Tyler, who used to make up little verses to remember tai-chi moves, Li said.

One thing he found about teaching celebrities - people who had achieved prominence in their fields - was that while they might not know the moves of kung fu, they already had the focus and discipline.

"It's definitely an advantage, to have someone who's in a place where they're ready to absorb information," he said.

But Li had no desire to cater exclusively to high-powered students. He didn't want to change the mix of students at the dojo, which he now co-owns with business partner and former student Joshua Grant.

"He trains all kinds of people: young and old, high-profile and low-profile and everything in between," said Li's wife, Dorri. "He enjoys that."

Gisele Bundchen is Li's most famous student so far. She had always wanted to study kung fu, she says, and a friend recommended Li's dojo. She takes private lessons with him every day when she's in Boston.

"It's like a moving meditation," she said in an e-mail. "It is very important to have the right teacher, and Yao is a great teacher. He is very aware so he can feel what each of his students needs are. And then he teaches accordingly."

When Sanders heard that Bundchen was coming to study with Li, he was concerned that it would be hard for Li to keep his school the way it was. "We have a community here," Sanders told Li. "This is going to change everything for you."

"I thought we'd get a lot of people really not interested in martial arts, coming to participate because of the notoriety," Sanders explained later.

But that hasn't happened.

"I see this school like an oasis," Li said. "Like when I was a teenager . . . it was a place where I found something could feel good about. And I see that now."

On a recent afternoon, students spread out across the floor, sparring and drilling. Li's two grown children, Andy, 20, and Katie, 24, stopped by to train, too. Later, Bundchen would come for her afternoon lesson.

"He does this because he loves it," Katie said of her father as she stretched on a mat. "He invests equally in all his students."

That's what Li wants to do for the rest of his life, he said.

"When I was in my 20s and 30s, I was teaching bodies. Now I feel I'm reaching deeper than the physical," he said.

"Some of my students ask me, do you ever get tired of teaching martial arts. I say no - I'm really teaching people. You're looking at individual souls."

Yao Li's martial arts students have included rock stars and famous athletes, among other luminaries. See who has trained at his dojo.
Your comment is subject to the rules of our Posting Policy
This comment may appear on your public profile. Public Profile FAQ