A winner at fitness 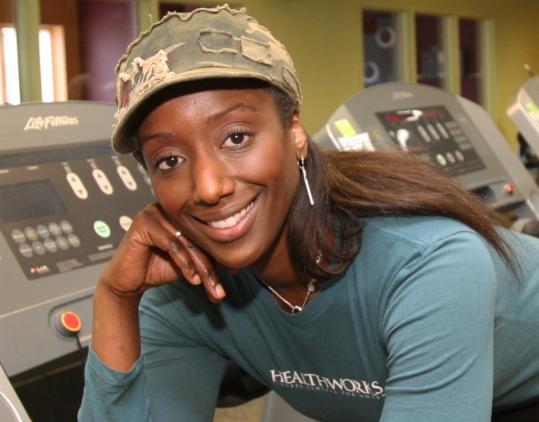 Andrea Baptiste may have lost in the inaugural season of NBC's "The Biggest Loser" but the Dorchester native won in many other ways.

She's maintained what she calls her healthy weight at 150 pounds. On the show, she weighed 215 pounds. She's 5-foot-8.

The show has also given her a career. Baptiste uses her experiences from the show and her academic background in fitness to teach women how to exercise and eat healthy.

Baptiste is the fitness director at the nonprofit Healthworks at Codman Square. She designs programs and teaches classes on muscle conditioning, kickboxing, and aerobics. The center also has a fitness area for members' children.

"It's so great to be able to be in the community and speak with children about health and wellness," said Baptiste, resembling a fashionable drill sergeant with her military cap, a T-shirt, and sweatpants at the center, located at 450 Washington St. in Dorchester. Since opening last January, the center has welcomed 830 members. Memberships range from $10 to $30 a month depending on a person's income.

"I am teaching women how to make healthy choices," added Baptiste, 34. "There are women here who have never been on a treadmill before. It's about giving them that choice."

Baptiste had an interest in fitness before appearing on the reality show. After graduating from Norwood High, she majored in exercise physiology at the University of Massachusetts in Boston. In college, she gained 40 pounds on her 130-pound frame.

"I was thinking 'Hold on, this is what I am studying. Why is there a disconnect?' " recalled Baptiste, who credits part of the weight gain to taking birth control pills and lack of exercise. "That's when I really started to take an appreciation to fitness centers and having a workout buddy."

She trimmed down but regained the weight and then some.

In 2004, she successfully auditioned for "The Biggest Loser," after hearing about a casting call in Boston.

At the beginning of taping in August 2004, she weighed 215 pounds. The show's trainer immediately led her and the rest of the contestants in a series of daily intense high-cardio training.

"On the first day, I was in the grass throwing up. He put me to work," Baptiste recalled.

Baptiste shed 30 pounds during her three months on the show. The more weight contestants lose, the longer they stay on the show.

Back in Boston, she lost another 30 pounds on her own through portion control, diet, and working out twice a day. In all, she has lost 68 pounds. Her exposure on the show has provided her with speaking opportunities at local schools and national women's conferences. Baptiste also serves as a spokesperson for the American Heart Association.

She said she doesn't pay attention to the numbers on her scale as much and tries to instill that message to members of Healthworks.

"It's not about being skinny," Baptiste said. "For me, it's having my comfort back. My attitude is positive because I like what I see and I feel good. That to me is my healthy weight."