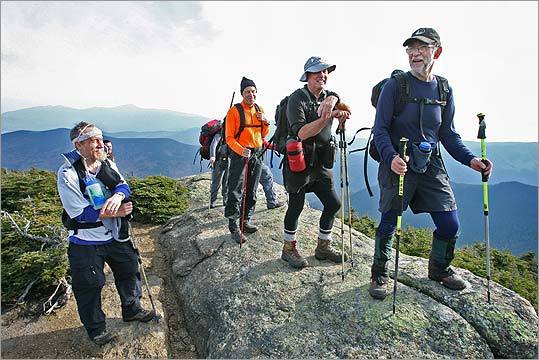 The term 'grid' is spare and scientific, speaking neither to wonders of nature nor the pulse of personal endeavor.

For a small but growing group of relentless New England hikers, though, the grid - catalogued on a spreadsheet 48 rows deep, 12 columns wide - documents a particular pursuit of both mountains and motivation.

The feat apparently was first accomplished two decades ago by a longtime bagger of peaks. Since then, seven others have joined him, including Ed Hawkins, thought to be the second to finish, in 2002, and now at work on his third and fourth grids.

The attempt itself can seem both obsessive and sublime. It sets a ridiculously distant goal for those not satisfied with other traditional measures of the mountains, such as a single loop of the 48 4,000-footers, or summiting all 67 of New England's 4,000-footers, or climbing New England's highest 100 peaks. Yet the grid also delivers those who pursue it where they've always wanted to be: enjoying the White Mountain heights, where boreal chickadees whine in the fir-spruce forest, or a flock of winter finches rides the wind over a ridge.

Hawkins explains it like this: "Doing the grid gets you back to what you originally started doing. Just to be outdoors."

It's hard to know how many people are now attempting this significant expansion of the single-layer goal of summiting New Hampshire's 4,000-foot peaks one time, no matter the season.

Hawkins maintains an e-mail list on which he announces many of his upcoming hikes to more than 200 people. During one week in September, for example, Hawkins hiked the Kinsmans on Wednesday, Mounts Tom, Field, and Willey on Thursday, and Mount Moosilauke on Saturday morning, for which he had to hurry to beat foul weather.

Hawkins is 62. He types his e-mails in capital letters:

THIS COMING WEDNESDAY, NOV 5, WE WILL BE HIKING THE TWINS AND GALEHEAD.

Seven hikers idle in the cool of daybreak, wearing boots and gaiters that cover their lower legs, packs pulled snug on their backs, with ice spikes and hiking poles dangling. Not 50 feet up the wet-leafed track, Al Aldrich, 62, says of the grid's 576 climbs, "You don't set out to do them all."

The decision to hike the grid, in other words, happens in increments, maybe after climbing all of the 4,000-footers, or doing them all in winter. What more?

Aldrich, of Jackson, N.H., played basketball during high school in Swampscott. Then he played tennis during one decade and ran races the next. Before the hike toward North Twin peak, and South Twin and Galehead beyond, Aldrich was "78 percent" done with the grid. He has also stood on the highest point in 40 of the 50 states.

"If I had started earlier I'd be excited to go up to Denali [in Alaska], but not now," Aldrich says. "So we'll end up with 49 states."

Shafts of soft sunlight sift down the narrow valley. The group hops rocks across the Little River, and the trail gets steep.

"After you've gone through the humidity, flies, and bugs. And you think, 'People do this in winter?' " says Guy Jubinville, 56. "It's almost more fun."

Jubinville, who lives in Twin Mountain and has worked for a decade as custodian at the Appalachian Mountain Club's Highland Center, in Crawford Notch, completed the grid in October, the culmination of 14 years of hiking. He recalls a particular trip to the summit of Mount Jefferson in December 1993. It was 25 degrees below zero.

"An epic, we call it," Jubinville says. "And we survived it. We made sure everybody was good. . . . We had people shivering. And we had to move."

In the early '80s Gene Daniell, 61, realized that he'd climbed all 48 in winter, twice, and heard of a man who had done all 46 in the Adirondacks during each month of the year. So he decided to do the same in the Whites, and succeeded in 1989. Daniell is not affiliated with the current grid effort, which includes a website maintained at 48x12.com. While he does not mind others trying to summit the 48 peaks in each month of the year, he finds the term grid "ugly almost to the point of being horrifying."

In an e-mail, Daniell, who because of foot problems hasn't climbed in a decade, explained the origins of his peak pioneering:

"I had undertaken the project with the idea that not only would it help satisfy the obsessive-compulsive urges that all of us whom Guy Waterman called 'ultimate peakbaggers' harbor, it also had a certain delightful whimsicality to it - doing something that others would consider crazy and enjoying it. But mostly I looked forward to seeing my beloved mountains in the full panoply of beauty they assume as the seasons pass around. I have always said that for me and most other peakbaggers I know, the List is an itinerary rather than a goal - on completing a list most of us experience a certain bittersweet exultation, knowing that a beloved old friend will never be with us in the same way again."

The point of it all

It is a mild day on South Twin summit, 4,902 feet above sea level. To the east, views in gray and green open toward the peaks of the Presidential Range, including Washington, Jefferson, and Adams.

"This is a presidential day," Hawkins says. "There're probably a lot of people up in the pressies."

Why hike Adams on a banner November day if you've already done it in November, and not South Twin?

Hawkins sometimes hikes in a pair of 14-year-old shorts, patches of fleece sewn by his wife over holes in the crotch, and on the seat. He drinks Diet Coke on some breaks, and passes out Butterfingers and M&Ms on others. Atop each summit he extends a hand and looks each hiker in the eye as an offer of hearty congratulations.

After South Twin and Galehead, the hike ends near dusk. Hawkins has been singing the praises of bottled beer - more carbonation, fresher taste - and offers the hikers a round of Pabst Blue Ribbon longnecks. Talk turns to a hike up Owl's Head three days later. Weather is iffy, though, and it looks as though the next day may be a good one.

Will Hawkins really be heading toward another 4,000-footer by sunrise?

He sits on the tailgate and pulls off his boots. With a grin, he says: "I'm thinking about it."