When landscape architect Rachel Kisker went to her 10-year high school reunion in 1998, she got a few good surprises. Sure, she had kept in touch with her close friends over the years, but back then she was in the dark about what most of her Scituate High School classmates had been doing during the decade since graduation. Now Kisker is preparing for her 20th reunion. This time, she knows just about everything about everybody. Thanks to the Internet, she knows where people live. She knows where they work. She knows what their spouses and children look like. She knows, in some cases, how they've spent their afternoons.

On Facebook, former classmates who haven't been in touch with Kisker since the last reunion update their profiles to tell the world they're reading to their kids, gardening, or doing mundane grocery shopping. "Some people put up very extensive explanations of their jobs, where they live, what their interests are," said Kisker, 38.

At her reunion tonight, there will be little need for the Scituate group to show off family photos and exchange business cards. The information is already out there, and it's already been swapped via e-mail. In fact, not only does Scituate's class of 1988 have a Facebook page, but it also has a public Evite, where people have left personal comments, as well as a reunion website where people have logged in requests for the DJ. ("Bizarre Love Triangle" and "Whip It" are on the list.)

"It will be interesting to see if we run out of things to talk about," Kisker said.

This weekend brings hundreds of high school reunions across the Bay State, but thanks to social networking websites and the almighty Google, there will be few surprises. Not only are high school reunion organizers using the Web to find one another, but most people have an online presence that gives away their place in life, marital status, and career highlights. Reunion guests already know who got pregnant, who got divorced, and what happened to the captain of the football team.

"The surprise is gone," says Randy Leaver, who owns Alumniclass.com, a website that helps people find their classmates and trade personal information online.

Lacey Gallagher expects to find out very little this weekend at her 10-year-reunion for Concord-Carlisle High School. Thanks to the Facebook profile she created for the event, she knows what most of her old pals are up to. It's pretty much as she expected.

"There are a lot of people in my class who are married," she said. "Maybe 5 percent already with kids. There's nothing incredibly surprising."

Brandee Barker, a spokeswoman for Facebook, admits that her website has ruined much of the reunion reveal. She says the upshot is that people can find one another. Without Facebook, MySpace, and the Internet in general, people would still be mailing postcards announcing reunions to the addresses of people's parents, many of whom have moved away.

Barker, who started a site for her own 20-year-reunion, which was held in October (she went to Westlake High School in California), got a few hundred sign-ups within just a few weeks of creating the reunion account. She was happy to trade surprise for the chance to get reacquainted with people before the event. Barker's husband was able to scroll through the Westlake faces and hear Barker's stories about her former classmates before he want to the reunion as her date.

"I sort of found that it created this renewed intimacy among my old friends," Barker said. "I found before anyone got to the event, many of us had already shared stories and photos. It's almost like it lessened the gap of the years."

Kristen Morelli, who planned to attend the Hanover High School 10-year-reunion last night and the Salem High School 10-year party tonight (her family moved during high school), said she believes the online tradeoff is probably worth it. She was able to use the Internet to gather people to her house tonight for a Salem pre-party.

Plus, even though Morelli is the prime Facebook demographic, some of her big questions haven't been answered.

"Not everyone has Facebook," she said. In fact, the one person Morelli is anxious to find - an old friend from childhood who went with her to a summer camp in Marblehead - is untraceable on the Internet.

"Nobody knows where she is," Morelli said last week. "It's kind of a common name. She'd be at Hanover. I'm sure that I'll find someone who will know what happened to her."

Kisker says that knowing all the answers before tonight's Scituate reunion is a comfort. Without getting the truth ahead of time, she is apt to imagine her former classmates as successful, worldly, and untouchable. But when she sees on Facebook that they've just put their kids to bed or that they're still living in Scituate, she is brought back to a less intimidating reunion reality.

"They're all just doing normal things like I am," Kisker said. "It demystifies it." 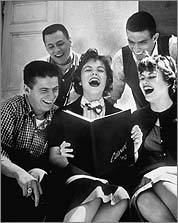