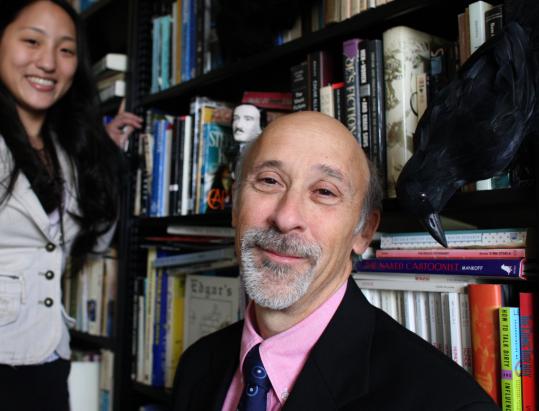 Thousands journey far and wide to view Edgar Allan Poe's grave in Baltimore, whose football team is named for his most famous poem. In New York, Philadelphia, and Richmond, Va., droves of devotees visit museums in the itinerant poet's former homes.

Yet in Boston, where Poe was born 200 years ago this January, the master of the macabre is a faintly remembered footnote, all but "nameless here for evermore," as he famously penned in "The Raven."

The only official nod to his local roots is a modest plaque at the edge of the Theater District, marking the spot where his birthplace once stood. In keeping with Boston's general disregard for Poe - a sentiment that was decidedly mutual - the marker is probably in the wrong place (as is a second plaque on Fayette Street).

Now a dedicated band of Poe scholars and students at Boston College is hoping to rescue the mysterious writer from "forgotten lore." They have embarked on an earnest, if quixotic, quest to persuade city officials to reclaim Poe as Boston's own and restore the writer, who often dismissed Boston and its literary scene as a provincial "Frogpondium," to its literary fold.

"It's been 160 years [since Poe's death]. Let's move on, and embrace our inner Edgar," said Paul Lewis, a Boston College English professor and Poe scholar. "I think people are willing to forgive and forget."

Boston College's lobbying efforts - a mix of sincerity and self-satire - are ambitious: January should be declared Edgar Allan Poe Month in Massachusetts, proponents say. A statue of Poe should grace Boston Common, and the city should comb its archives to determine the true location of his birthplace.

On a lighter note, an honorary raven on one of the Swan Boats would be a nice touch, they quip, and a striking black bird might provide a nice contrast to the family of bronze ducklings in the Public Garden.

BC officials presented their Poe proposals to city and state officials by telephone yesterday.

City Council President Maureen Feeney's office said it was receptive to the idea.

"In Boston, history is something sacred," said Justin Holmes, a spokesman for Feeney. "We're always open to new and unique ways to celebrate our past."

The bicentennial of Poe's birth has sparked a resurgence of interest in the 19th-century writer. Baltimore, the city most closely associated with Poe and where he died in 1849, is planning an elaborate, yearlong observance called "Nevermore 2009." Other cities plan celebrations as well, Poe specialists say.

Boston College plans to do its part with a two-day celebration, including speeches by Poe specialists, readings, and the screening of a new independent film, "The Last Days of the Raven."

Yet Poe never held much affection for his birthplace or its literary elite. He sometimes falsely claimed Richmond or Baltimore as his hometown, and once wrote that he was "heartily ashamed" of his Boston roots.

He lavished scorn on Transcendentalists such as Emerson and Thoreau, and often accused Longfellow of plagiarism. His resentment deepened after a disastrous reading at the Boston Lyceum in 1845 drew withering reviews. The Boston Evening Transcript wrote that the "audience listened in amazement to a singularly didactic exordium, and finally commenced the noisy expedient of removing from the hall."

"He hated everything Boston stood for," said Shawn Rosenheim, a Williams College English professor and author of "The American Face of Edgar Allan Poe." "He was the naysayer, the repressed underside, to the Transcendentalists. He was always puncturing high-mindedness."

But Poe deserves wider recognition in his hometown, enthusiasts say, historical enmities aside.

"Two hundred only comes once," said Katherine Kim, a BC graduate student in English literature who is helping organize the bicentennial commemoration.

Poe was born Jan. 19, 1809, and his parents, who were traveling actors, soon left town. His mother died before he was 3, and Poe went to live in Richmond with a foster family. After dropping out of the University of Virginia, Poe went to Boston, and after enlisting in the Army, was stationed briefly at Castle Island, which is thought to have inspired his story "The Cask of Amontillado."

Poe returned to Boston in 1848, a year before his death, and tried to commit suicide.

Yet Poe remains as anonymous as when he self-published his first book under the broad byline "A Bostonian." He is unmentioned on tours, and all but unknown as a native son.

"Outside the Poe scholarly community, almost no one knows he was born in Boston," said Scott Peeples, an English professor at the College of Charleston and author of "The Afterlife of Edgar Allan Poe."

But Poe's tortured relationship with Boston was also inspirational, the clash with competing writers fueling his creative energies.

"Even though he had antagonism with Boston writers, the interactions helped him develop his theories," said Kent P. Ljungquist, an English professor and Poe scholar at Worcester Polytechnic Institute. "The sparks helped create some of his most important ideas."