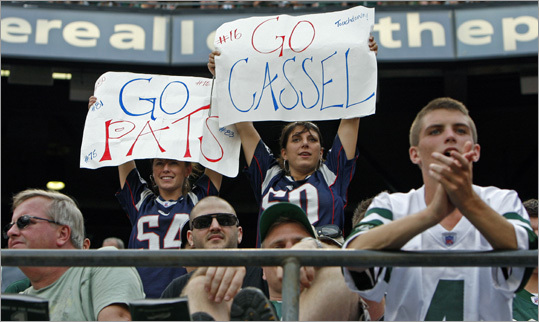 With Tom Brady out, fans are hoping Matt Cassel can help lead the Patriots to victory this season. Away from the playing field, Cassel's star may also be rising. (Jim Davis/Globe Staff)
By Meredith Goldstein Globe Staff / September 18, 2008
Text size – +

Crystal James has learned two things about Matt Cassel over the past couple of weeks. One, the guy can carry his weight on the field. Two, the recently promoted quarterback is - to put it bluntly - adorable.

"He is cute," the 23-year-old Patriots fan from South Boston admitted the other night. "You never noticed him before."

Traditionally, Patriots fans have been loyalists of the team because they are interested in a game called football. But because of Tom Brady and his good looks, the Pats have earned a posse of followers who are more interested in the quarterback's pinup status than his passer rating. Those fans - the ones who couldn't care less about touchdowns and interceptions - are mourning the loss of Brady this season. After all, without postgame press conferences that show a sweaty Brady wearing a cozy hoodie, what is there to look forward to?

The answer is a 26-year-old, 6-foot-4 guy from California who became the starting quarterback after Brady suffered a knee injury in the season opener. Cassel turns out to be as easy on the eyes as his predecessor. He has big bright eyes. He smiles a lot. He says cute things about being inexperienced.

"He's a stunning man," says Mary Alice Stephenson, a fashion commentator and Harper's Bazaar contributor. "He's no Tom Brady, but that doesn't mean he can't be."

Stephenson says Cassel has the good looks an athlete needs to transcend the sports world and become a bona-fide heartthrob. The new starting quarterback requires four more things to achieve celebrity-caliber hotness, she says: a perfect haircut, a made-to-measure suit, expensive shoes, and a pair of Levi's. Apparently it's that easy.

"Basically, with a little bit of polish, he could get as much attention and as much love for his fashion sense as Brady if he has the right people around him," she said.

And the right people will come. "He's a good-looking guy," said Michael Macko, fashion director at Details magazine, which put Brady on the cover last year. "I'm sure many people will be offering to help dress him."

If Cassel wants to be Brady off the field, Macko said, his marital status may be a setback. Part of Brady's appeal is that he's a bachelor who has had celebrity girlfriends, including his longtime flame, supermodel Gisele Bundchen, and the mother of his child, actress Bridget Moynahan. Cassel, on the other hand, is married to former University of Southern California volleyball player Lauren Killian.

"The fact that Matt is married, it puts him in a different league than Tom," Macko said, disapprovingly.

Boston style magnate Gretchen Monahan, however, says being married makes Cassel more attractive. "Even more hot points," she said in an e-mail. "We love men who can commit."

Patriots spokesman Stacey James said Cassel wouldn't want to talk about his own attractiveness or whether he desires Brady's level of celebrity status. James also said he himself didn't have much to say about the QB's good looks. "That's not an area of my expertise," he said.

Christine Rebelo had plenty to say about the subject. The Spanish teacher and part-time waitress at The Stadium in South Boston has seen a sudden increase in the number of women sporting No. 16 Cassel jerseys. She's also heard plenty of analysis of Cassel's looks at her tables.

Rebelo, 27, counts herself as a Cassel supporter. In fact, she claims that if she saw Brady and Cassel on the street and got to pick one, she'd choose Cassel.

"He's an all-American boy," she said. "I like the scruffy look."

But, according to sports marketing experts, it doesn't matter how adorable and scruffy Cassel is. If he doesn't win football games, he won't become a celebrity like Brady.

"It's purely by performance," said Robert Passikoff, whose company, Brand Keys, studies consumer loyalty. "Not everyone can be Derek Jeter. You've got to be excellent at the sport."

Don Hinchey, vice president of communications for the Denver sports marketing firm The Bonham Group, said few players are so good-looking that they become pinups without having done much for their sport - Anna Kournikova notwithstanding. "Usually performance and charisma are the predictors for marketing and celebrity status." he said.

Assuming he can get a few more wins on his record, Cassel will have to start making himself more visible to get the full Brady effect, assuming he wants it, Hinchey said.

"Brady did the GQ thing. That was very popular. Maxim is another one that gets a lot of attention," he said. "I'm thinking he and his wife need to step out a little more."