Up in the air

Juggling's best? An old-school veteran is challenged by a hot young star. 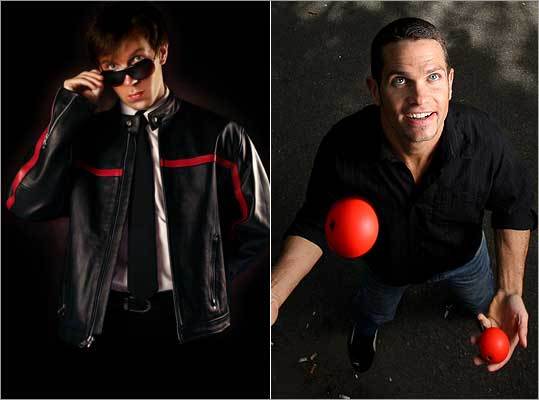 Who is the world's greatest juggler? For the past two decades, there have basically been two answers to this question in the small world of serious jugglers. One answer is to say that it's a silly question because "greatest" is impossible to quantify and there are so many styles of juggling. The other answer is Anthony Gatto.

Since bursting onto the scene as an 8-year-old prodigy at the International Jugglers' Association's competitions in 1981 (he won the juniors championship, beating a pretty-good 15-year-old named Patrick Dempsey who left juggling to become an actor), the Maryland native has blown away the juggling world. Experts say that his technical skills, and his ability to execute them onstage night after night, are without precedent, and without equal.

"We talk about him being the 'gift of human perfection,' " said Wes Peden, an 18-year-old from Rochester who is considered the most talented young American juggler.

"He looks like he can do anything he wants," said Alan Howard, the editor of Juggle magazine. "The hardest tricks look easy for him."

But as Gatto, who is 35 now, prepares to begin a monthlong engagement in Boston with Cirque du Soleil's "Kooza," his claim to the "world's greatest" title is receiving its first real challenge, at least in the media.

Vova Galchenko, a 20-year-old Russian juggler living in the United States who is a star of the World Juggling Federation, an organization dedicated to turning juggling into a competitive sport, has become a media darling over the past two years. Time, "Oprah," The New York Times, NBC's "Today" show, "The Ellen Degeneres Show," ESPN, and ABC's "Nightline" have all featured him. Almost always, the stories feature some allusion to Galchenko being the world's greatest juggler.

The problem with this, according to juggling insiders, is that while Galchenko is an astoundingly good technical juggler, the media has let his fascinating back story - he and his younger sister, Olga, basically juggled their way out of a rough life in Russia - obscure the reality.

"Every reporter I speak to, I tell them that Gatto's a better juggler than me at this time," Galchenko said in a phone interview from his home in California. "[Gatto and I] both know this. The reason I'm getting all the publicity is that Olga and I are young and we come with this story."

Gatto says he holds no grudge about the attention being heaped on Galchenko; he went through the same media blitz himself when he was even younger, with appearances on "The Tonight Show" and "That's Incredible," and a feature story in Sports Illustrated. But recently Galchenko made a television appearance that did bother Gatto, and it set off a head-to-head competition between the two that has the juggling world buzzing.

In early July, Galchenko appeared on NBC's " Circus" and broke a "world record" by doing 21 "five-club five-up 360s in one minute" (while juggling five clubs, the juggler will throw them up higher than usual, pirouette underneath, and then catch the clubs and resume juggling). "That record is a WJF invention," said Gatto, who has been a vocal opponent of the "sport juggling" idea on the grounds that juggling is, and should remain, a performance art. And Gatto, who holds most of the significant "official" juggling records (which track only the number of props and catches, such as the most catches with nine balls), thought that the so-called record was too low to be meaningful. A few days later he released an Internet video showing him doing the trick 24 times in a minute. Galchenko responded with 29. Gatto came back with 30 (and announced that he was done with their little competition). Galchenko then did 31.

If "world's greatest juggler" is too broad to define, basing that on one particular skill is equally problematic. "It's a pretty silly measure because it's like a gymnast taking one trick out of a routine," said Arthur Lewbel, an economics professor at Boston College who started the MIT Juggling Club as an undergraduate in the early 1970s and has been a staple of the American juggling scene ever since. "But at the same time, I can remember a time not too long ago when doing one five-up 360 would have been a considerable feat."

Comparing Galchenko to Gatto is difficult because they come from different juggling generations, Lewbel said. Gatto has put his life into his act, a 10-minute demonstration of wow that has allowed him to make a comfortable living performing around the world. Galchenko is more of an amateur who has made his name at juggling conventions and competitions and through Internet videos, and isn't comfortable performing.

"Gatto is the last and best of the old-school jugglers," Lewbel said. "Up until the YouTube era, you would only work on a trick if it were possible to get it solid for performance. Now you can go for a 1-in-a-1,000 trick because as long as you get it on camera, you've done it. Gatto performs seven clubs and nine rings. The idea of doing that stuff night after night onstage, in front of an audience, is something the Vovas of the world haven't done."

The performance is everything, Gatto says, and that's what's missing in the younger generation. "Until those kids grow a personality, they're not going to wow anybody," he said in a phone interview from his car as he drove to Boston last week with his wife, Danielle, who is the dance captain for the show and his assistant during his act. "The audience doesn't care if you juggle 20 rings."

Gatto now says he regrets getting involved in the 360s competition - though he says he can still go higher - because it sent the wrong message. The only way to judge a juggler, he says, is to watch him onstage, under the bright lights, over the course of a career.

"The kid, Vova, he's a great juggler," Gatto said. "And maybe someday he might make it to the level where he can call himself the greatest. But not just yet."