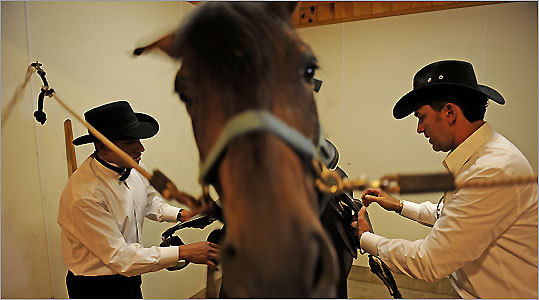 MIDDLEBOROUGH - "Look at yourself, how beautiful you are, baby," Luis Vasco told his chocolate brown Paso Fino as it paused and looked at itself in a mirror inside the stable.

With the cadence of a 1-2-3-4 beat, Andrioto the stallion then smoothly pranced with Vasco in the saddle.

Twice a week, Vasco leaves the bustle of his two East Boston restaurants, Taco Mex and Tequilas, and drives 50 miles here to Paso Fino del Fuego Farm to commune with Paso Finos. The weekly visits remind him of his youth in his native Colombia, where the horses are considered a national treasure.

Hoping to raise awareness of Paso Finos among Latinos in New England, Vasco has become the breed's unofficial local publicist. In Middleborough, he has hosted and organized two exhi bitions called "Feria de Caballos Paso Finos" to celebrate the horse and its historic cultural ties to the Spanish-speaking community. The breed flourished in Latin American countries such as Venezuela and Colombia after Spanish conquistadors brought them to the New World more than 500 years ago, according to the Paso Fino Horse Association. The name "Paso Fino" means "fine step" in Spanish.

"This is the most popular type of horse in my country," Vasco said as he checked Andrioto's back right hoof on a recent morning at the Paso Fino del Fuego Farm, which is home to 60 Paso Finos. As Vasco spoke, Andrioto's flowing black mane happily swung like a pendulum.

"Their gait is unique," said Vasco, who is 41. "My father and my uncles all had Paso Finos. I never thought there would be Paso Finos in the United States. I thought it was only a Colombian tradition to own these kinds of horses."

That's understandable, because the horses tend to be found in warmer climates such as Florida and South America. Throughout his youth, Vasco commuted between the Colombian city of Cali and the countryside, where his family owned a ranch that bred Paso Finos.

In 1988, when Vasco immigrated to Boston, he thought he had left the world of Paso Finos behind. He came here with an eye on a college education, but he found himself working as a janitor and in various restaurant and construction jobs. He eventually began working for a Jamaica Plain contractor that bought houses at auction, restored them, and then sold them.

After learning the ropes of the construction business, Vasco bought his first property in 1995 in East Boston, the neighborhood where he lived with his wife and two children. When the owner of a restaurant in his building vacated, Vasco decided to fill that space with his own eatery, with help from a friend who was a cook. Vasco opened Taco Mex in Maverick Square in 2003 and then expanded with Tequilas Bar & Grill.

As his professional life bloomed in the grit and noise of Eastie, Vasco yearned for the whinnies and neighs of horses from his youth. He saw them only when he vacationed in Colombia.

He visited the farm the next day and eventually bought Andrioto, who was born in Rhode Island to a Colombian mare and stallion. Vasco boards Andrioto, who is 6 years old and 14 hands high, at the farm.

"I want to share this with the Hispanic community," he said. "This is something that more people need to know about."

Riding a renewed enthusiasm for the breed, Vasco started his own Paso Fino horse exhibition, which drew 350 people last year. On Aug. 2, he held another exhibition that drew about 400 people.

At that event, a procession of eight Paso Finos showcased their fast fancy footwork, which riders say provides the smoothest ride. Each horse had a Spanish name such as Azabache, Timo del Norte, and Aria del Fuego. Like thundering gunfire, the horses strutted on a sound board that lined the middle of the pen, which like the rest of the farm exuded a certain earthy smell.

"We love these horses," said Ortega, who took the day off from her job in East Boston to attend the show with her brother, sister-in-law, and friend. She snapped photos of each horse. "The way they walk is so pretty and elegant. It reminds me of my country, Colombia."

Throughout the afternoon, Spanish filled the air. Folks wore traditional ponchos and "sombreros volteados," Colombian-style cowboy hats. Children rode ponies while adults chewed on grilled chicken and pork. With the success of the second event, Vasco is planning next year's exhibition, with encouragement from the farm's owners.

"Paso Finos to Latin America is like football to New England," said Michael Bruce, a trainer and co-owner of Paso Fino del Fuego Farm, which opened in 1973.

"This opens up the whole market for us in the Hispanic community," added Bob Yunits, co-owner. "Luis has been instrumental in getting the word out to the Latino community."

Just as he did as a kid in Colombia, Vasco continues to commute from city to country for Paso Finos.

"When you have so much stress from work, you need to decompress," he said from his saddle. "When you come here, you feel like you are somewhere else. I want other people, other Latinos to know that these horses are here so they can pass on this passion to their children."

History: Spanish conquistadors brought Paso Finos to the Americas more than 500 years ago. The breed began to grow in popularity in the United States after World War II, when American servicemen stationed in Puerto Rico came into contact with the horses and began importing them.

Color: They are found in all colors except in the Appaloosa coat pattern.

Personality: Paso Finos are people-oriented and generally do what is asked of them.