The laugh of luxury 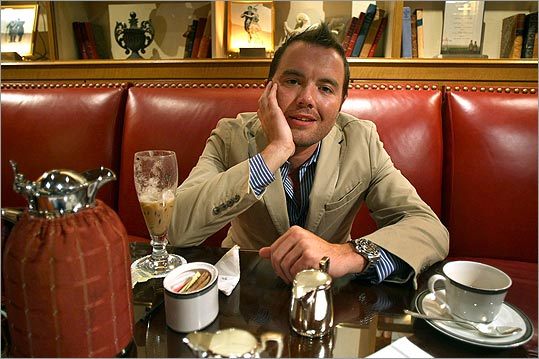 Christopher Tennant, ethnographer of the fabulously wealthy, has spotted one of his quarry in the sumptuous dining room at the Four Seasons Hotel.

"There's a guy over there with very bad hair," he says. "A perfectly bad white sort of muff of hair."

Rich people, turns out — really rich people, the kind with six houses, a private jet, a butler, and a majordomo — are so plagued by the constant niggling challenges of managing their multi-millions that style often falls by the wayside.

"Sometimes they can look terrible, the rich," says Tennant, "like a bunch of mummies." And he should know, having spent the past 18 months intensively studying the strange and arguably enviable world of people with more money than they know what to do with.

Tennant, a 29-year-old Newton native who was raised upper-middle class ("a typical species of Boston's western suburbs," he says: summer house, but no housekeeper), used that assiduous research - which involved trips to "all the Saints," including St. Moritz, St. Bart's, and St. Tropez - to compile "The Official Filthy Rich Handbook," a 21st-century answer to the Official Preppy Handbook, published in 1980.

It's a mostly-but-not-completely tongue-in-cheek guide for anyone curious about how the other half lives, fond of laughing at the more fortunate, or unsure of the meanings of words like "majordomo" (an estate manager and chief of domestic staff, in case you're wondering).

It's not that Tennant has it in for the wealthy. It's just that he finds them fascinating, and for the sake of book sales, is hoping that others do, too.

"Language, secret codes, ways of dressing, and all of the things that define a subculture - it has all those things," Tennant says of the filthy rich, whom he defines as anyone with more than $30 million in liquid assets. "And as a subculture, it hasn't really been chronicled."

That's one reason for the guide. The other? "There's just endless room for comedy," he admits.

The breezy book offers bite-size, graphics-rich sections full of tips on how to buy an island (hire Cheyenne Morrison, the best private-kingdom broker there is), correctly pronounce Cannes (it's "Can," not "Khan"), and identify distinct plutocrat subspecies, including the Dynasseur (think Steve Forbes), the Heirhead (Paris Hilton!), and the Steve Jobs-esque Technocrat.

"He's a really sharp social observer," says Maer Roshan, the editor in chief of Radar magazine, known for its irreverent coverage of celebrities and pop culture. Roshan hired Tennant straight out of college in 2000 at New York magazine and has worked with him ever since. "He likes to hang out with some of those people but isn't beyond kind of laughing at their foibles."

Tennant became captivated with the idea of stepping into unfamiliar worlds and reporting back when, as a teenager, he read Tom Wolfe's "The Electric Kool-Aid Acid Test." He's been a journalist since he joined the newspaper staff at Noble and Greenough School in Dedham, which, incidentally, is one of 19 day schools recommended in the "Teach Your Children Swell" section of the handbook. Tuition there is $29,500 a year, according to the book.

He served as editor in chief of the student daily at the University of Wisconsin-Madison before landing at New York magazine. He went on to work at the short-lived Talk magazine and the New York Post's gossipy Page Six. In 2003 he cofounded Radar, where - after seeing the magazine through two deaths and as many resurrections - he is now a contributing editor.

Gossip reporting, he says, has more in common with old-fashioned journalism than the job's modern deskbound version.

"You gotta have sources, you gotta hit the street, you gotta talk to people - you gotta break news," says Tennant, sporting a striped shirt open to the third button and a khaki suit just shades away from Wolfe's signature white garb. He has blue eyes and a small, endearing gap between his two front teeth, and his dark hair is swept up into a peak a little like egg whites beaten stiff for a soufflé, says his friend and fellow writer Sloane Crosley.

"He's one of these guys who can get away with a Paul Smith shirt and have it not look dandyish, obnoxious, fratty, or gay," says Crosley, a book publicist whose essay collection "I Was Told There'd Be Cake," was published this year. "And he has hair like no one I've ever seen."

Tennant's research required call after call to track down information like the elusive Paris location of high-end jeweler Joel Arthur Rosenthal, who makes custom pieces for the likes of Elizabeth Taylor and Diane von Furstenberg. It also meant scouring out-of-print books for revealing details - there's a lot of history packed into this slender volume - and, maybe more than anything else, listening for leads.

"I don't know what you're so uptight about," said a nude Englishman sitting poolside at St. Tropez when Tennant asked why he wasn't wearing a bathing suit. "It's the middle class that ruin it for everyone. The upper class and the lower class know that there's nothing wrong with being naked."

That offhand comment inspired a section in the book on why the rich swim nude, including a laundry list of famous aristocrats who prefer to relax in the buff.

Besides skewering the rich, Tennant wants to help them - especially the newly arrived. According to property records, he says, most residents of Beacon Hill's posh Louisburg Square have owned their homes only since the 1990s.

"That's not old fusty Brahmins," he says. "That's Irish Catholics and Jews and people from all over the place, living the way this old Brahmin 'Waspitocracy' lived for a long time."

After all, it's a complicated life that requires skill in the lost arts of administering wealth, from hiring waitstaff (and keeping them in line) to designing the custom interior for a private Gulfstream jet. This is where the filthy rich handbook ascends beyond humor to - if you can believe it - practicality.

"I imagine that some people could certainly take it seriously and use it as a resource," says Tennant, who took pains to assemble directories of businesses, social clubs, and individuals who cater to the privileged.

Asked whether he expects to someday join the ranks of the filthy rich, Tennant - who, on his book swing through the Boston area, stayed with his parents rather than at the Four Seasons - shakes his head. "I doubt it," he says. "I'd have to sell a lot of books for $11.95."

But if he suddenly had the means, Tennant says, he'd buy a newspaper - partly to help rescue journalism from the death-grasp of the Internet, but also because owning a mouthpiece confers a certain power more satisfying, even, than money.

"It's the one thing that keeps them up at night," he says of the upper crust's attitude toward the media. "You can control every other thing in your life," he says, "but then you read a story by a 20-year-old kid about how you have fat hips, and it ruins your day."

So is that his goal, to rankle the rich?

Emma Brown can be reached at ebrown@globe.com.