For homeless animals, a better place to wait 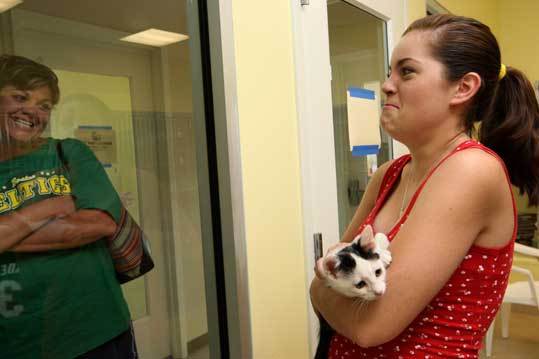 The 10-week-old feline stuck close to her sibling, curled up on a pink blanket in a cage, her lonely green eyes staring into space.

Then Alyssa Bartholomew, a 14-year-old from Lynn, fell in love with her. She decided to take her home and name her Ruby.

"Her eyes are so cute," Bartholomew said, cradling her pet like a new mother. "I think she's beautiful."

Ruby won't have to scrap for supper anymore, or find a porch to hide under during storms. She'll have Alyssa and her brother Patrick, 11, who together saved $200 to adopt her and take care of her.

The pair saved enough to pay the $125 adoption fee, which includes the cost of having her spayed, plus shots to prevent leukemia, worms, and other diseases, which will be administered by staff at the shelter.

They also bought her kitty litter and toys. Alyssa, who turned 14 on July 3, named her Ruby after the color of her birthstone. "She's so small and precious," said Alyssa, who has signed up to volunteer at the shelter. "She sleeps in my room with me."

In animal-talk, Ruby got a "forever home," a place where she will stay for good. That's the goal at Northeast, one of New England's largest animal adoption centers, which recently moved to a new $5.4 million facility in a former car dealership on Highland Avenue in Salem.

Northeast financed the project with a $3.2 million low-cost loan backed by the Massachusetts Development Finance Agency, the state's financing authority, which issues bonds, loans, and grants to stimulate the local economy.

"This is a dream for us," said Randi Cohen, executive director of the nonprofit, founded 32 years ago in the basement of a veterinary clinic across the street. "We have wanted this for so long. We can do so much more here than in our old spot."

The 13,000-square-foot facility has room for more than 100 cats and dogs. Northeast takes in stray cats from across the region, while dogs are rescued from places as far as Indiana and Puerto Rico. The shelter has a "no-kill" policy, meaning animals stay there until they find a home.

"We've had blind animals here, three-legged dogs, too," said Laurie McCannon, the development director. "We take care of them all, until we can place them."

The new shelter has rooms named Purrfect Angels for kittens and Puppy Palace for small dogs. A nutrition room for dogs is called Bow Wow Chow. Doggone Suites house large dogs. Classical music is piped into each room, providing a soothing respite for frisky animals. Each cage is labeled with name, age, and breed, along with a description that reads like a personal ad.

"I was given up with my kittens because my owner had too many of us. I'm a friendly girl who is good with other cats and kids," reads a plea for Blackie, a fat black cat.

Sprite, a female cat, tells the sorry tale of her abandonment. "I was found at parking lot - Can U believe it? I'm very friendly. Will you be my family?"

Aurora, a chihuahua-terrier mix, was a "sato," Spanish slang for street dog. "I was abandoned on the streets of Puerto Rico, until one day a nice lady stopped her car and I jumped in. She cared for me until I was ready to travel to the States. I'm looking for a family here."

The heart-tugging appeals aim to give prospective owners a peek into the animal's past. Play rooms, filled with scratching posts and toy balls, allow owners another look at a cat's personality. Visiting rooms - built to look like the facade of a house, with dutch doors and addresses such as 14 Licking Lane and 44 Bark Boulevard - allow dogs and potential owners to bond.

"We really wanted to make it a fun place for people to come and see the animals," said Cohen, who said her sister founded the shelter. "This facility allows us to give people a whole new experience."

The new facility will also allow for the expansion of community education and pet visitation programs to schools and nursing homes. The shelter, which has eight full-time staff members and 24 part-timers, also hopes to build an army of 200 volunteers, who must be at least 14 years old. The morning shift, starting at 7 a.m., when cages need to be cleaned and pets walked, is most in need of help. "That's a hard time for us to fill," McCannon said.

Northeast also relies on the good will of friends and donors. The nonprofit does not receive any public money. A donor base of about 80,000 includes individuals and organizations across the country. Donations range from $5 to $1,000, McCannon said.

Bequests, such as a recent gift from the estate of a woman living in California, also help build the coffers. "We sometimes get surprised," she said. "I think because we're a 'no-kill' shelter, we have an advantage. A lot of people really appreciate it that we rescue" dogs and cats.

Northeast is also getting a bit savvier about fund-raising. A capital campaign to raise $5 million is underway, with appeals made to longtime donors. The shelter is also offering naming rights to 46 rooms in its new home. Opportunities include $1 million to name the building, $250,000 to name a pet adoption room, $100,000 for an outdoor dog area, $50,000 for a nutrition center, $25,000 for a dog visit room, $15,000 for a cat medical holding room, and $10,000 for a laundry room.

"We're grateful for any amount of help we get," said Cohen, who noted two rooms have already been sold. "We'd like our shelter to become a model for others." 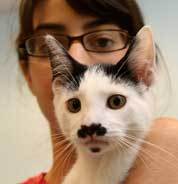