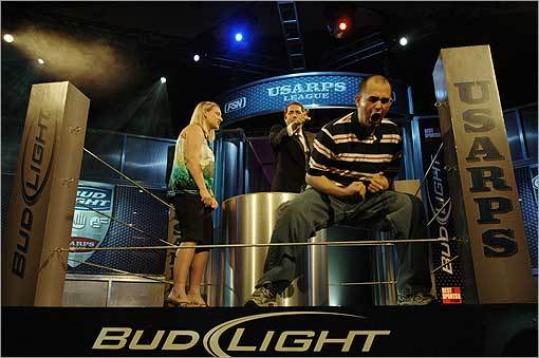 Not to Chicopee's Sean Sears, who, unbelievably, walked away with $50,000 after winning the 2008 Bud Light/USA Rock Paper Scissors League Championship in Las Vegas.

The systems analyst for Mass Mutual next travels to China to play against champs from Canada, Guam, Hong Kong, and Ireland for the title of the "world's best rock, paper, scissors player." No kidding.

"It's a little bit of luck, but also being able to read your opponent and determine if there's a pattern," Sears told us Tuesday, explaining the secret of his success. "You basically go with your gut."

Asked if he trained for the finals, Sears laughed. No, he said, like the rest of us, he rarely even plays rock, paper, scissors. "This is just something I heard about, so I entered," he said.

League commissioner Matti Leshem was mighty impressed, calling Sears "the most polished champion in the storied history of this colossal event."

So what's Sears going to do with his windfall? "The responsible thing would be to put it toward student loans," he said, "but I don't know if I'll do that."